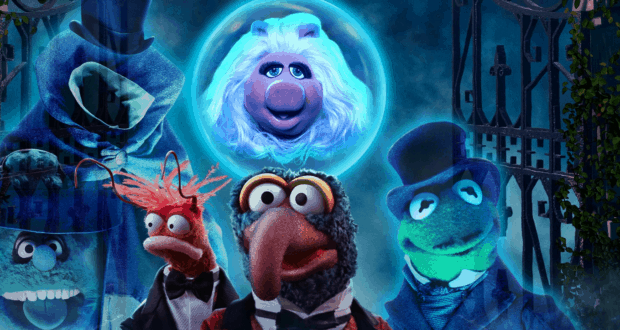 With Halloween just around the corner, it’s time to get out the candy and start watching some spooky shows and movies. And don’t worry – we’re talking about the kind of creepy you can enjoy with your loved ones! From The Simpsons to Star Wars and everything in between, here’s our family guide to Halloween specials on Disney+.

If you’re looking to satisfy your LEGO Star Wars itch and Halloween cravings at the same time, then LEGO Star Wars Terrifying Tales makes too much sense to ignore. The Halloween special features several iconic Star Wars characters like Luke Skywalker, Darth Vader, BB-8 and Emperor Palpatine, and almost as if you’re sitting around a campfire, you’re told a number of short spooky stories from the faraway galaxy! Much like The LEGO Star Wars Holiday Special, Terrifying Tales proves that Star Wars still has plenty of charm left and is capable of delivering fun by the bucketload.

The Simpsons Treehouse of Horror

The Simpsons have graced our screens for over three decades, and their annual Treehouse of Horror episodes (known also as The Simpsons Halloween Specials) are always great fun at this time of year. The animated show asks you to suspend your disbelief at the best of times, but with these Halloween specials, you really need to let go of reality and enjoy the spookier side of Springfield! The annual specials started way back in 1990 and have been a Simpsons staple ever since. Check out the ‘Simpsons Horror’ section on Disney+ and enjoy some real tricks and treats!

Just to keep a healthy mix of tricks and treats on this Halloween watchlist, here’s yet another short Halloween special, courtesy of everyone’s favorite toys. The short film Toy Story of Terror takes place after Toy Story 3 and sees Woody and his roundup being captured by a motel manager called Ron, who is actually working for Al from Toy Story 2! While it’s a pretty short affair, it’s still fun to see life continue for our favorite deputy and space ranger, even if it does involve seeing them in yet another tricky situation.

The Nightmare Before Christmas

You could argue that The Nightmare Before Christmas is in no way a Halloween movie, as it’s usually found among the Christmas classics. But perhaps the most unique thing about Tim Burton’s stop-motion film is that you can enjoy it on both Halloween and during the Holidays! It’s also one of the most merchandisable Disney properties ever – just go into any store at Disney Parks and you’ll see what we mean. The film follows Jack Skellington, a bored pumpkin king from Halloweentown who finds a way into Christmastown, where he plans to rule the Holiday season.

If The Nightmare Before Christmas whets your appetite for even more Tim Burton fantasy animation, then be sure to check out Frankenweenie. A young Victor Frankenstein is heartbroken when his dog meets his maker, but if you’re familiar with the traditional concept of Frankenstein, it won’t surprise you to learn that Victor ends up bringing his dog back to life! It’s not a scary film, though, but there’s enough monsters in store to make this a must-watch on your Halloween watchlist. And the unique style of animation also helps this movie feel “alive”!

If you find yourself torn between 2003’s The Haunted Mansion and the all-new Muppets Haunted Mansion, we’ve made the decision for you. Join Kermit, Miss Piggy, Gonzo and Fozzy Bear as they brave the haunted hallways, creepy crypts and chilling chambers of Disney’s most otherworldly estate. Like LEGO Star Wars Terrifying Tales, Muppets Haunted Mansion is yet another way to strike two things off your list in one hit. If you’re a fan of the Muppets, you’ll love this film. And if the classic Disney attraction also happens to be a favorite of yours, it’s a win-win.

Hocus Pocus is one of those films that has definitely garnered something of a cult following over the decades – and it’s no surprise considering it’s the epitome of ’90s cheese! That’s not to suggest it’s in any way a bad film, though. It’s a whole lot of fun watching teenager Max, his sister Dani, zombie Billy and talking cat Thackery battle three evil witches on the night of Halloween. And then of course’s there’s the earworm of a song that renders this film worthy of its own musical (come to think of it, why hasn’t that happened yet?!). So it’s fair to say that this movie will “put a spell on you”!

Marvel’s What If… Zombies?!

On any other year, it would seem strange to include anything Marvel-related on a Halloween watchlist, but Marvel’s What If..? is unlike any other show, and the ‘Zombies‘ episode is a must. Original Ant-Man Hank Pym discovers something deadly in the Quantum Realm when he recovers his lost wife Janet, who has been infected with a zombie-like virus. And when Earth’s Mightiest Heroes answer the call, the zombie-Avengers assemble! This episode is definitely worth checking out, and you don’t even need to watch the rest of the show to enjoy it. Hulk smash? No, Hulk bite!

There’s plenty more Halloween content on Disney+, but this watchlist means that you’ll get everything in one – Marvel, Star Wars, The Simpsons, Pixar and the Muppets!