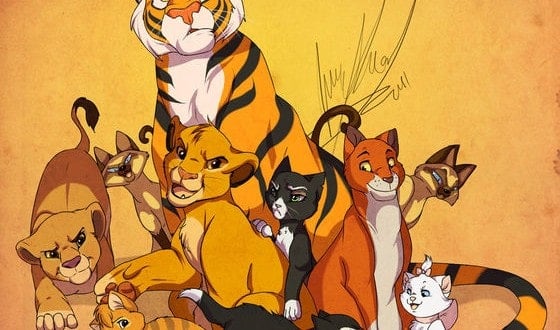 Did you know that October 29th just happens to be National Cat Day? And as any diehard Disney fan can tell you, cats of all sorts have played pretty important roles in countless Disney films over the years. We acknowledge that there have been a couple of bad kitties along the way with some notorious examples being Lucifer from Cinderella, Shere Kahn from The Jungle Book, Scar from The Lion King, Prince John from Robin Hood, and Si and Am from Lady and the Tramp, among many others. But for the most part Disney cats have been portrayed in a “purrfectly” positive light. Those are the ones we’re honoring here, with this tribute list featuring Disney’s coolest cats.

Related: Which Disney Feline Are You?

We first became acquainted with this cute little tuxedo cat after the release of Disney’s animated film Pinocchio, back in 1940. Despite his non-talking role as a traditional house pet owned by Geppetto, this kitty stole the show with a soaring fan base. Walt Disney himself even reportedly said that Figaro was his favorite character in the entire movie, and looked for ways to incorporate his character into other works. That is the reason behind why we continue to see Figaro, often appearing as Minnie’s pet cat, throughout various Mickey Mouse shorts and feature film productions.

Disney’s Alice in Wonderland presented us with two very different cats, though both assume the likeness of traditional house cats. Alice’s pet cat Dinah is the more conventional of the two. What singles out the Cheshire Cat, though, is his ability to speak and associate with the title character, not to mention his supernatural abilities.

That animated full-length Disney hit from 1970 we know as The Aristocats features a whole menagerie of felines. But our key kitties here are undeniably Marie, Toulouse, and Berlioz. Mom Duchess and tomcat Thomas O’Malley aren’t to be overlooked either.

Related: Which Cat From The Aristocats Are You?

You may be thinking that Disney’s 101 Dalmatians goes entirely to the dogs, but don’t forget this faithful feline sidekick to Colonel, the sheepdog. While sometimes overlooked, Sergeant Tibbs does in fact play a pretty big role in assisting the title puppies, as well as parents Pongo and Perdita, in reuniting and escaping the cruel clutches of Cruella de Vil.

This mellow, elderly cat companion from Disney’s The Rescuers in 1977 is depicted differently from most other cats. An old soul, he is a friend and comfort to the film’s primary human protagonist, Penny. He also agrees to help the film’s titular mouse characters in their quest to find Penny rather than abiding by the usual cat-and-mouse tactics.

This tiny tabby strolled onto the scene in 1988 with Disney’s animated adaptation of Oliver & Company. A spin on the traditional Oliver Twist story by Charles Dickens, the film’s plot centers mainly around stray animals living on the streets, with the Oliver character being a cute little kitten caught up in a gang comprised mainly of dogs.

This tough-talking kitty from Disney’s 2008 computer-animated film Bolt is softer than she initially appears. At first she is presented as a temperamental, streetwise stray (who is also mistaken for being secret agent ‘Dr. Calico’ by the title protagonist), but as the movie progresses we get to see more of her character’s complex dimensions and inner goodness.

This Japanese bobtail cat warmed our hearts when he first appeared in Disney’s computer-animated hit Big Hero 6 back in 2014. While he may be a minor character, he still adds cuteness to the story through his unassuming presence as a family pet. And we must note the implication of the family-owned “Lucky Cat Café”. Mochi has prevailed in gaining a firm fan base and even reprised his role for the Big Hero 6 Disney original television series.

Related: Which Big Hero 6 Character are you?

You can’t forget about DC from That Darn Cat! While the original 1965 classic and its 1997 remake follow vastly different paths in the way of plot, the crucial elements in both films prevail, most primarily the fact that it is DC—the title protagonist cat–who takes center stage as the FBI’s crucial link to discovering the whereabouts of a missing person.

The Cat From Outer Space is an often-overlooked 1978 classic by Walt Disney Productions, which features an extraterrestrial feline protagonist at the center of its plot. Jake is the titular feline in this case—an alien who assumes the likeness of a tabby cat.

While cats are often credited with having nine lives, we get to see three of those lives actively lived out on screen by the title protagonist in the Three Lives of Thomasina. Another of the less popular Walt Disney live-action productions by today’s standards, this feature film from 1963 introduces us to a remarkable feline in a heartwarming tale that any crazed cat lover would appreciate.

This beautiful blue-eyed Himalayan cat we love so well from Disney’s Homeward Bound franchise has a name that does her justice. Her casually-sarcastic comments, prissy demeanor, and overall sassiness, however, do not outshine her spirit of endurance nor hinder the truly goodhearted nature that she possesses.

While not officially a cat by nature, there are many fans of Disney’s Hocus Pocus who would agree that Thackery Binx rocks the role of cursed boy-turned-kitty. Despite the fact that he was at one time a human being, for most of the film he appears as an immortal black cat that can talk.

Related: Calling All Hocus Pocus Fans! You Could Be An Extra In “Hocus Pocus 2”

As the rightful ruler in Disney’s all-animal presentation of Robin Hood from 1973, King Richard the Lion is a good and just king—the very antithesis of his younger brother Prince John. He is beloved by many and truly does his lion’s share for all.

Here’s another big cat we should talk about. While not always stellar in his approach to handling situations, and even being temporarily ousted from his role as mayor for proving to be a lying lion, we cannot deny that he has a strong presence in Disney’s computer-animated hit Zootopia, nevertheless. Despite the fact that his character isn’t portrayed in an overly favorable light, he really isn’t such a bad guy. His intentions, however misguided, were never intended to cause any harm.

Related: What Species of Animal Would You Be in Zootropolis?

That’s right, we’re incorporating this beloved classic character of Winnie the Pooh fame into our lineup of anthropomorphic cats. It’s understandably easy to overlook the fact that he’s even a cat. He’s a tigger, after all, and the only one of his kind, so he says. But let’s be real; for all intents and purposes, he is obviously a tiger.

The Wild Bunch of Disney’s Felines

In keeping with tigers, we now turn our attention to this beloved pet belonging to Princess Jasmine from Disney’s Aladdin. While living within the palace walls the way a normal house cat would, he is nevertheless a wild cat to have around, and a loyal protector to his owner.

While not every feline featured in Disney’s The Jungle Book movie adaptations can be counted as good guys, this mentor and caretaker of the film’s human protagonist certainly can be. Presented as a protective black panther, Bagheera is a knowledgeable and loyal friend to have in your court.

Sometimes Aslan from The Chronicles of Narnia franchise gets lost in the shuffle, but the fact remains that this steadfast lion ruler deserves nothing but praise. He stands as the “purrfect” paragon that all cats should strive to be like.

Another notable lion, this time a noble, Simba is the primary protagonist in Disney’s The Lion King. And to say he reigns supreme would be an understatement. All the same, we must also take note of the numerous other cool cats comprising of the pride here as well, including Sarabi (Simba’s mother and queen), Mufasa (Simba’s father and preceding king), and Nala (best friend to Simba who also ends up becoming his eventual wife).

Related: Can You Name Every Character From The Lion King?

As you can see, Disney cats come in all different varieties. But all are unique in their own special ways. While all Disney magic may have started with a mouse, there is also a feline frenzy here that we simply can’t deny.