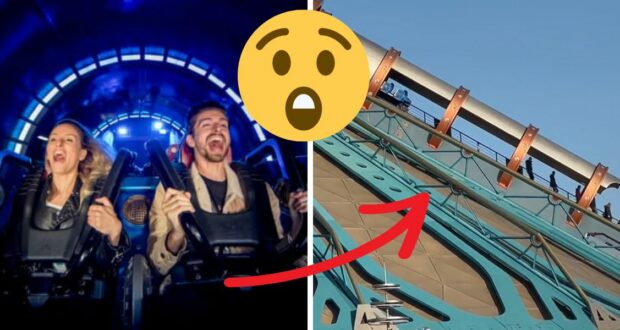 It will be no surprise to many Disney Park and Disney ride fans to learn that the Disney Parks have been seemingly plagued with ride breakdowns and malfunctions in recent months (perhaps due to the reportedly-understaffed maintenance department in Disney World) — but ride evacuations are also becoming very common, and one group of Disney Park Guests just went through a particularly harrowing scenario!

If you are easily frightened by heights, then you will be pleased that you were not among the Disneyland Paris Resort group of Guests who had to evacuate their Hyperspace Mountain vessel during the Star Wars ride on November 14 and descend down a long flight of stairs at harrowing heights.

According to the Twitter account called @DLPReport, “a train stuck on top of the catapult” was the cause of the malfunction and the subsequent evacuation. Take a look at some footage of the evacuation process in the Tweet shown below!

🔧 At Hyperspace Mountain, Guests are being evacuated down the cannon’s stairs due to a train stuck on top of the catapult: pic.twitter.com/uNwSFEqhms

The roller coaster called Hyperspace Mountain was then closed until at least Wednesday, November 16; according to @DLPReport, the ride is “provisionally reopening Thursday Nov 17.”

The Disneyland Paris ride called Star Wars Hyperspace Mountain is essentially a different version and an “epic takeover” of the Space Mountain roller coaster. The ride is described as “a jaw-dropping experience fit for the most fervent followers of the Force” that also includes “a frenzy of red and green blaster fire, the wicked whirr of TIE fighters and a stunning Star Wars score”.

If you had to contend with a descent from a great height like the Hyperspace Mountain Guests did this week in Disneyland Paris Resort, do you think that you would be able to remain calm? Let us know on Facebook, Instagram, and Twitter!