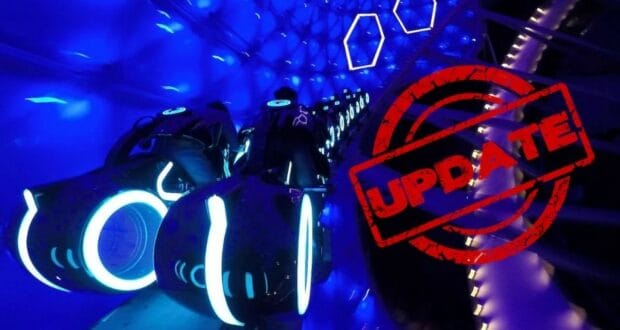 After 50 Months of Construction, TRON Reaches Another Milestone

We’ve been in it for the long haul, Disney fans! But, we must say after well over 50 months of construction, we’re seeing more and more milestones reached for Magic Kingdom Park’s highly-anticipated TRON Lightcycle Run roller coaster.

The construction to clear the land for the Tomorrowland coaster began back in February 2018, now as we wrap up April 2022, we’ve seen progress in ways such as the Walt Disney World Railroad tunnel through the rollercoaster being worked on, as well as the TRON train actually being tested!

The latest milestone is the completion of the main canopy that wraps the attraction. @bioreconstruct took to social media to share the update with a few photos.

@bioconstruct notes on April 24, 2022, for the photo above, “Current work near the attraction entrance of Tron. The main canopy is complete, but likely more ETFE panels will span over the structure closer to the walkway.”

The photo above shows the current work underway at the entrance of TRON.

Plus, check out these two distant photos shots from Disney’s Contemporary Resort of the Disney Park. In the image above you’ll see Monorail Silver with Space Mountain and TRON in the distance. In the photo below, is the view from the top of the Contemporary Resort.

Of course, there is still much work to be done! Even though Walt Disney World Resort has initially planned to have the attraction ready to roll in time for its 50th Anniversary Celebration on October 1, 2021, due to COVID, construction slowed drastically.

Instead, it seems like the focus has been on EPCOT’s new roller coaster, Guardians of the Galaxy: Cosmic Rewind which opens Memorial Day Weekend. TRON will likely be worth the wait however as the attraction is extremely popular in Shanghai Disneyland where Disney opened the TRON coaster in June 2016.

Want to take a ride on the Shanghai Disney Resort TRON coaster? Check out the video below and hold on tight!