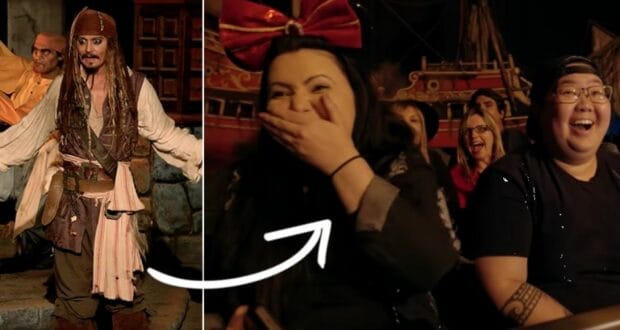 Johnny Depp is a name that is impossible to miss when scrolling through social media. The Johnny Depp vs. Amber Heard trial has been the center of the news. One thing is clear from the trials and that is Disney fans’ love for Johnny Depp as Captain Jack Sparrow in the Pirates of the Caribbean franchise. Now, a video of Depp surprising Disney riders in the Park is resurfacing.

Recently, reports are revealing that Disney has yet to include Johnny Depp in its plans for Pirates of the Caribbean 6, leading fans to boycott watching the film without Depp as Jack Sparrow. Furthermore, a petition to bring Depp back to his Jack Sparrow role continues to grow in numbers.

With the talented actor at the center of “Justice for Johnny Depp“, we’re seeing a beloved video from Walt Disney Studios resurface after five years. The video was first shared in May 2017 as a promotion for the film Pirates of the Caribbean: Dead Men Tell No Tales. A few lucky Disneyland Resort Guests who rode the iconic Pirates of the Caribbean attraction were surprised when Johnny Depp stood in as Captain Jack Sparrow. Check out the surprise appearance video below:

On May 12, Walt Disney World Resort took to social media to promote the Pirates of the Caribbean ride posting, “Aye, matey! Climb aboard this classic during the 50th Anniversary celebration. Yer pirate name = Captain + sea + yer fave animal. Drop yers below!” Fans slammed Disney for the tweet during the trial with additional comments about the lack of Johnny Depp in future Pirates of the Caribbean films.

What’s to come out of the Johnny Depp and Amber Heard trial is still unknown, as is Depp’s future on the big screen and relationship with Disney. We will be sure to share updates as the situation continues to unfold.