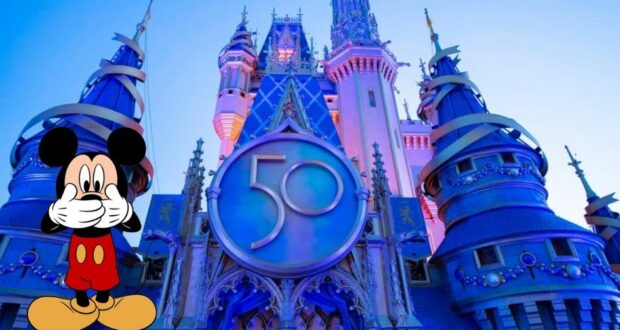 Walt Disney World Resort is in the midst of celebrating its 50th Anniversary with “The World’s Most Magical Celebration” which kicked off on October 1, 2021, and runs a full 18-months. A recent social media post from Disney, however, is being torn apart by Disney fans in an overwhelming way.

It’s no secret that Disney fans have felt like “The World’s Most Magical Celebration” has been a letdown. Coming off of COVID-19 phased reopenings, Walt Disney World has been dishing out the magic but not to the standards many expected.

New nighttime spectaculars such as Disney Enchantment at Magic Kingdom Park and Harmonious at EPCOT were unveiled on October 1 but weren’t met with excellent reviews. Disney also rolled out Beacons of Magic lighting for Cinderella Castle at Magic Kingdom, Spaceship Earth at EPCOT, Tower of Terror at Disney’s Hollywood Studios, and Tree of Life at Disney’s Animal Kingdom. Plus, Disney fans can spot beloved Disney characters in stunning EARidescent 50th Anniversary outfits.

But, with attractions such as TRON Lightcylce Run still under construction, missing nighttime spectaculars such as Fantasmic, half-entertainment like A Celebration of Festival of the Lion King, and slow restaurant reopenings such as Hoop-Dee-Doo Musical Revue, the lull in Disney experiences have seemed to cause some backlash.

Also with the 50th Anniversary, Disney also decided to pull the complimentary FastPass system and introduce the upcharge Disney Genie+ and Lightning Lane attractions to Guests who have been anything but impressed with the new system.

So, when Walt Disney World Resort took to Twitter to ask the question, “Which 50th Anniversary celebration highlight are you MOST excited about?” and included “The bites, the sights, and the dazzling light”, Disney fans FILLED the comments, hitting Disney hard.

The comments in the thread call out different issues Disney fans have with Walt Disney World’s current state with responses such as:

And those are just a few of the comments. On occasion, you’ll come across a positive Disney experience response such as this one excited about the new 50th Anniversary coffee mug:

It’s obvious Disney fans are struggling on several levels with Walt Disney World’s recent decisions. The 50th-anniversary celebration will continue however for the full 18 months, ending the celebration on April 1, 2023.