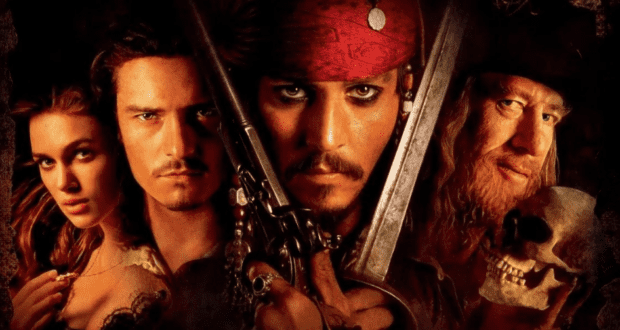 It may technically still be springtime for another month, but it feels like summer is just around the corner. And for many folks, this is the time of year when that strong, yearning desire to escape on an action-packed adventure based in a warm, tropical setting is at an all-time high. Fortunately, we have movies to help us out in fulfilling all those otherwise impractical longings of the heart, with some films fitting the bill far more perfectly than others.

Disney’s Pirates of the Caribbean: The Curse of the Black Pearl, for instance, serves as a savviest example for delivering on all the above as it continues to make new waves nearly 19 years since first setting sail into film popularity. And that is why we’re recommending this buccaneer-based blockbuster as our family movie night pick this weekend on Disney+.

Pirates of the Caribbean: The Curse of the Black Pearl follows an interconnecting storyline that brings together what would otherwise be very separate, personal character arcs. Set sometime within the early- to mid-18th century, the events driving the film to begin several years earlier than the primary premise when a young boy named Will Turner makes his way to Port Royal in the Caribbean following the burning of a ship he had been on.

He is first discovered by the young daughter of the governor, Elizabeth Swann, who also happens to notice a strange pirate medallion around his neck. Longing to protect young Will from suspected piracy, Elizabeth quickly takes the medallion, hiding it away, and keeping it secret for eight long years.

Will and Elizabeth both grow up as casual acquaintances living very different lives in Port Royal. She is a fine lady by society’s standards and he goes on to become an apprenticed blacksmith. And while there is an unmistakable, mutual yearning on both their parts to be more than just friends, there are limits in knowing one’s place in life.

Enter Jack Sparrow, a traditional vagabond pirate who just happens to arrive at Port Royal just in time for all the plotted action to unfold. He comes on “business,” so to speak, as he currently has no ship or crew and is in the market for securing both.

His arrival just happens to coincide with the very moment that Elizabeth faints and falls off a rocky ledge into the crashing waves of the Caribbean waters below. And as luck would have it, the medallion she just happens to be wearing around her neck on that day triggers a certain jolt, the moment she connects with the water.

Things get even weirder when a crew of otherworldly pirates come in and raid Port Royal that night, in search of something unknown. In all the confusion, Elizabeth is taken hostage and Will is determined to set off and save her, even if it means aligning himself with pirates and one in particular—Jack Sparrow.

Related: Which Pirates Of The Caribbean Man Would Be Your Husband?

Pirates of the Caribbean delivers on an action-packed adventure that, at the time, revolutionized Disney’s standards in epic moviemaking going forward. While it was officially the first film by Walt Disney Pictures to receive a PG-13 rating (excluding earlier works by Touchstone), filmmakers stop short of producing content that is too daring for a family-friendly audience.

Instead, they focus on stellar choreography, humorous touches in all the right places, and a masterfully played-out musical score to accompany all the onscreen happenings. And let’s not forget all the special effects at work in addition to all this, erasing the limits entirely for what can and cannot be accomplished within a motion picture.

A Cast of a Thousand

When it premiered back in 2003, Pirates of the Caribbean: The Curse of the Black Pearl had another claim to fame—being the next hit movie headed by a cast of big-name celebrities in Hollywood. The star of the film, after all, was none other than renowned actor Johnny Depp appearing as Captain Jack Sparrow.

Actor Orlando Bloom, already established by that time as a Hollywood bigwig following his fame in Lord of the Rings filled the role of Will Turner. And while she already had several acting credits to her name when the movie was released, there’s no denying that Pirates of the Caribbean really helped to skyrocket actress Keira Knightley’s popularity with her portrayal of Elizabeth Swann.

Actor Geoffrey Rush is another notable presence in the film, bringing to life the notorious pirate Captain Barbossa. It’s also worth mentioning that Zoe Saldana, better known for her roles in the Avatar and Guardians of the Galaxy franchises also had a role in this film portraying the female pirate Anamaria.

With the emergence of four sequel follow-ups, it also goes without saying that the later films also brought in even more big-name celebrities, including Bill Nighy and Keith Richards.

While this isn’t the only time an attraction that first existed within Disney Parks has inspired a feature-length film it is unquestionably Disney’s most popular and successful example of doing so to date. Other attempts, such as the made-for-television movie Tower of Terror back in 1997 and the theatrically released adaptation of The Haunted Mansion in 2003 (both with reported reboots in the works) never boasted the same blockbuster success as Pirates of the Caribbean.

And what’s really interesting to note is the fact that both the film franchise and ride alike have continued to play off of one another in the years following. At first, you had an original movie storyline that drew inspiration from the ride with various Easter Egg callouts included along the way, like the dog with the keys, being one such example. There was even a film cameo by “the redhead” woman (before she was redone as Redd the Pirate for the ride).

Then, something revolutionary happened in Disney Imagineering in which the ride underwent specific updates to better reflect the movie’s premise. Ever since it has been a continuous back and forth mutual influence going on.

Related: See The Newly Refurbished Pirates Of The Caribbean Now Open To Guests

The best news of all is that all five films are streaming on Disney+, making the prospect of having a Pirates of the Caribbean movie marathon this weekend a very pleasant possibility.

Is there really any better way to enjoy the weekend up ahead than with pirates, popcorn, and some Disney+ streaming? We think not. And there are many who would agree, especially given the forever trending popularity of pirates in general and Disney’s Pirates of the Caribbean in particular.