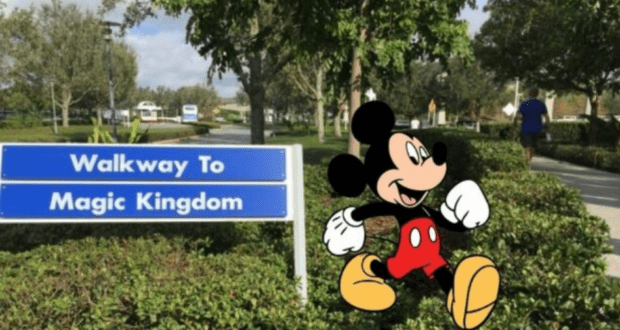 Guide: Walking to Walt Disney World Parks from the Resorts

“A leisurely stroll is a gift.” — Saving Mr. Banks

Walt Disney World Resort spans an impressive grand total of 27,000 acres of land, covering well over 40-some square miles in all. Making up its elaborate composition are four world-famous theme parks, two wonderful water parks, various other property-based Disney designations, and more than 20 different resort properties. The latter comes with a host of perks and advantages exclusive to Guests staying on-premises and even includes reliable, complimentary transportation services that make navigating to and from different locations throughout Disney World convenient to do.

From around-the-clock shuttle buses at every accommodation site to alternate boat services where they are available—not to mention the renowned Walt Disney World Monorail system and popular Skyliner at select hotels—Disney makes getting to and from the different Parks easy and hassle-free. But did you know that it is actually possible to walk directly to some Walt Disney World Parks from nearby Resorts?

That’s right! Depending on your Resort Area’s location and whether you’re up for the challenge to do so, taking a scenic journey on foot to some of your favorite nearby attractions is an entirely doable endeavor. Here we’re highlighting all the different walking trails from various Resorts for you to follow along that will lead you to your favorite Walt Disney World Parks.

Related: How to Stay Fit During Your Walt Disney World Vacation

The Magic Kingdom Area Resorts play host to a number of trails and pathways. While some can be used to interconnect various accommodation properties to one another, others will take you straight to the entrance of Magic Kingdom Park.

When you consider all of the Magic Kingdom Area Resorts that surround the Seven Seas Lagoon, Disney’s Contemporary stands out as the original to feature an actual walking path leading straight into the Park. But that goes without saying given the fact that it is the closest hotel to the Park—next door, in fact. While admittedly not one of the more scenic pathways to take on Disney Property, this walking route is, in fact, one of the shortest ones, averaging between five to 10 minutes tops, depending on your walking speed.

With signs directing you on your way, the walk will lead you across the parking lot, even venturing directly underneath the running monorail lines overhead. Following along, you will end your journey right at the security checkpoints proceeding Park admittance. And given the proximity to your Resort and the idea of traveling light, you may have no need to have any bags checked and may therefore continue on to the Mickey tap styles.

Some may feel that the newer walkway leading from Disney’s Grand Floridian Resort & Spa to nearby Magic Kingdom Park has been long overdue. Encompassing various areas around Seven Seas Lagoon that were previously off-limits to the public, as of late 2020, Disney Guests now get to enjoy a scenic, leisurely stroll en route spanning just 15 to 20 minutes tops.

Do take note, however, that the walkway to Magic Kingdom Park is not located expressly on solid land. Guests opting to take the footpath will also be crossing two newly constructed connecting pedestrian bridges over the canal, one of which happens to be a swinging bridge that allows boats to pass through. This is also the connecting point where floats for the Electric Water Pageant come in through.

In addition to venturing over bridges, Guests will also be traveling at various points below the running monorail and get to take in stellar new perspectives of Disney’s lesser-seen bucolic features around the Magic Kingdom Resort Area.

Related: Enter to Win a Stay at The Villas at Disney’s Grand Floridian Resort & Spa!

Because Disney’s Polynesian Village Resort is right next door, Guests staying here may also walk to Magic Kingdom Park via the same scenic pathway. To begin, however, you will need to utilize the already well-established walkway that’s been adjoining the two Resorts all along.

When staring out across Seven Seas Lagoon from the Polynesian Village Resort Marina, you’ll want to head left, following a route that intricately weaves its way toward the Grand Floridian, passing by Disney’s notable Wedding Pavilion along the way. The trail runs about 1/3 of a mile and takes about 10 to 15 minutes one way. Continuing on to Magic Kingdom Park may end up taking close to 35 minutes.

Walking From The Shades of Green Resort

This hotel doesn’t often get the same amount of publicity as other Magic Kingdom Area Resorts, as it is an Armed Forces Recreation Centers (AFRC) designation and is therefore reserved exclusively for Guests who are affiliated with the U.S. Department of Defense. All the same, walking from here to Magic Kingdom Park is, in fact, also entirely doable, although you’d probably be looking at a lengthy 40 or more minutes each way.

Disney’s Shades of Green Resort is about a 10-minute stroll to the next closest Disney Resort—the Polynesian. What’s more, there is a convenient, easy-to-navigate walkway that connects the two Resorts. Starting from the Shades of Green Lobby, you will want to head left, taking the sidewalk that leads down the hill between the road and parking lot. From there, you will cross the entrance to the parking lot and take the sidewalk to the guard shack. This will bring you to a gate where you will need to press a button to exit (Note, on your return, entering through this same gate requires an ID check). Next, you will continue on a straight path towards the Polynesian’s Great Ceremonial House in the distance. This path will lead you to cross through a series of crosswalks and other concreted sidewalks, but staying on course is pretty self-explanatory. Then, once you are there, you follow the same highlighted course from the Polynesian to the Grand Floridian and then take the Magic Kingdom walking path from there.

Related: Disney’s Secret Resort – And Why It Will Amaze You!

Guests staying at one of several accommodations situated along Crescent Lake get to experience a twice-as-nice walking advantage to two Walt Disney World Parks—EPCOT and Disney’s Hollywood Studios. On the EPCOT side, the walking routes from these hotels all bring you to the Park’s back entrance at International Gateway. Venturing on foot to the main entrance at Disney’s Hollywood Studios follows a course running past shuttle stops and the Disney Skyliner. Generally, Resort locations are closer to EPCOT than they are in Hollywood, with varying times of arrival, between five and 10 minutes for the former, and up to 20 minutes for the latter.

Of all the Resort Hotels in this area, Disney’s BoardWalk boasts the shortest walking distance to Hollywood Studios. It doesn’t even equal a mile and may take as little as 15 minutes, depending on your speed. Likewise, taking the route to EPCOT’s International Gateway only amounts to about .3 miles, and depending on where at the Resort you are heading from, the journey may take only five or 10 minutes to complete.

Both footpaths offer up a refreshing perspective, presenting to you a most alluring scenic alternative running parallel with the course of the surrounding waters.

Because both Disney’s Yacht Club and its sister Beach Club Resort share common grounds, we are counting them together as a package deal in evaluating walking distance and arrival times to both Parks. In all actuality, though, it is the Beach Club that offers the shortest path of all to EPCOT’s International Gateway. Some sections of the Resort are just a quarter of a mile away. At most, you will only need to ever travel half a mile from the adjoining grounds. So, depending on your point of origin and being mindful of walking speed, traveling to EPCOT by foot may take as little as five or 10 minutes. On the flip side, however, the walkway leading up to Hollywood Studios may take up to 20 minutes. All the same, it offers up wonderful vantage points into the surrounding scenescape and makes for a great, low-key less-crowded alternative to take on a fair day.

The Walt Disney World Swan and the Walt Disney World Dolphin Hotels, along with the newer Swan Reserve addition, are all under a mile’s walk away from EPCOT’s International Gateway entrance. They are also about a mile’s stride away from Hollywood Studios. Again, you’d be following along a scenic trail running parallel with the water and offering up fresh perspectives into Disney’s serene natural side of things.

In addition to being central to two popular Walt Disney World Parks, these accommodations also happen to be in close proximity to the nearby Fantasia Gardens and Fairways Miniature Golf. The same goes for all EPCOT Resort designations in regards to walkability from each of the aforementioned locations.

In profiling the ease at which one may walk from a Disney Resort situated along Crescent Lake to EPCOT and Hollywood Studios both, it really goes without saying that to journey on foot from EPCOT to Hollywood Studios or vice versa is entirely doable if you’re up to the challenge. The distance between EPCOT’s International Gateway and the Park entrance to Hollywood Studios only spans about 1.25 miles at most. Depending on your walking speed, this option will probably only average about a half hour to complete.

While Disney Springs is not a Disney Park, it is a Disney attraction in its own right. And given the fact that there is one viable way to walk here from an existing Disney Resort, we feel that it is worth profiling. We are, of course, referring to that little-known routed pathway leading from Disney’s Saratoga Springs Resort all the way to Disney Springs. Because Saratoga Springs is such a big Resort, it must be noted that you cannot mutually calculate the same estimated time of arrival for each point of origin here. The quickest and most convenient way to begin the journey by foot is to start off at the Congress Park area of the Resort. Note, the Resort’s internal bus services have a stop here as well, making getting to this location easy before beginning the initial walk. Then, you will take a pathway south, passing the pool along the way and heading straight for Lake Buena Vista. From there, you will continue left, where you will end up coming to a bridge to cross over, leading to Disney Springs.

In addition to all the wonderful walking trails that make arriving at Disney Parks on foot a reality, every Walt Disney World Resort plays host to a number of other scenic trails and pathways, perfect for walking, jogging, or just enjoying nature in general. There are also many that connect various neighboring Resorts—conveniently allowing Guests to utilize dining or recreational sources at another. Some notable callouts here include those that adjoin Disney’s Fort Wilderness to the Wilderness Lodge, the Art of Animation to Pop Century, and the Caribbean Beach to Disney’s Riviera.

While action-packed Park attractions are always a blast, sometimes the simple act of taking a leisurely stroll at Walt Disney World Resort is just what you need. It can be a tranquil, peaceful, scenic, and relaxing, low-key attraction in and of itself.