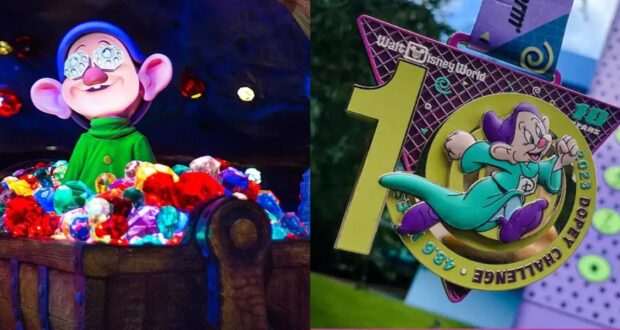 This Disney World Challenge is So Hard, It’s “Dopey!” Literally!

The Walt Disney World Marathon weekend is drawing near once again, and with it comes the chance to complete one of the craziest Disney world challenges ever.

There are lots of fun unofficial Disney Parks Challenges that die-hard fans like to say they accomplished, like visiting all four Disney World Theme Parks in one day, completing every single ride and attraction at Magic Kingdom Park, and successfully drinking around the world at EPCOT. But for the past 30 years, runDisney has brought its own challenge to Disney Parks: The Dopey Challenge. runDisney’s Walt Disney World Marathon Weekend gives Guests the opportunity to take part in four different races: the 5k (3.1 miles), 10k (6.2 miles), Half-Marathon (13.1 miles), and the Marathon (26.2 miles). Completing just one of these races is worth celebrating, but runners have the chance to run as many as they like. The Dopey Challenge calls runners to complete all four races in the same weekend, recording just under 50 miles run across the Central Florida property.

The challenge turns 30 years old this year, and scores of running-happy Disney fans have been “Dopey” enough to step up to the challenge and have been successful, many of whom have trained and saved their money for well over a year to make the dream come true. The different races offer a unique perspective of the Disney World Theme Parks, with the courses running straight through the Theme Parks, including around World Showcase Lagoon and up and down Main Street, U.S.A. While many serious runners participate in the races, many Disney fans also partake, dressing up for the occasion and taking full advantage of the special character interactions that can be found mid-route. runDisney hosts a series of other racing events around the world, including at Disneyland Resort in California, Disneyland Paris Resort, and Castaway Cay. There are also several virtual races you can participate in as well.

If you are thinking about participating in a runDisney race or want to go for it all in the Dopey Challenge, click here to learn more.