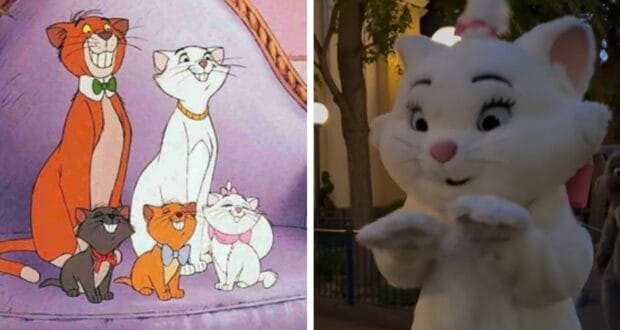 Marie, Berlioz, and Toulouse are not your everyday Disney characters showing up for Meet and Greets — but the three iconic kittens from the family of cute cats in the 1970 movie The Aristocats just made an appearance for a special Disneyland event in Disney California Adventure!

Take a look at these adorable kittens strolling through Disneyland Park in the Instagram video below! The Aristocats is a 1970 animated Disney movie and musical about an elegant female cat named Duchess (who was voiced by the famous Hungarian actress Eva Gabor) and her three mischievous but talented kittens.

When the cats’ owner names them the beneficiaries in her will, the woman’s jealous butler Edgar Balthazar tries to get rid of the cute cats once and for all — but a handsome tomcat and alley cat named Abraham de Lacy Giuseppe Casey Thomas O’Malley (voiced by The Jungle Book and Robin Hood Disney voiceover actor Phil Harris) comes to the rescue!

Although Marie might have stolen the show when it came to the kittens in the animated Disney film, any and all of these three young cats would be a pleasure for many Disneyland Guests to meet. Unfortunately, Marie, Berlioz, and Toulouse were ‘in town’ only for one specific event at Disney California Adventure: the Disneyland After Dark Grad Nite Reunion!

The Aristocats is often overlooked, especially by the newer generation of Disney fans — but fans of the classic Disney days will no doubt be pleased to learn that some characters from the animated musical do occasionally show up in Disneyland or Walt Disney World Resort!

Would you like to meet these cute cats (or kittens) in person? Did you attend Disneyland After Dark: Grad Nite Reunion and see them already?