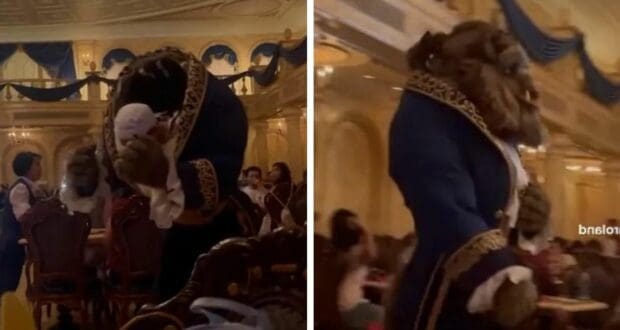 Beast Loses Head in ‘Be Our Guest’ Restaurant

Disney Cast Members are known for their commitment to excellence and their ability to stay in character so as not to ruin the ‘Disney magic’ for Guests at Walt Disney World Resort or any other Disney Resorts or Disney Parks. In fact, staying in character is a crucial part of the role; however, sometimes extenuating circumstances can present a challenge, and a Cast Member playing the Beast in the Be Our Guest restaurant recently had to contend with a very noticeable costume malfunction.

According to footage from TikToker and opera singer Victoria Roland, who was visiting the Be Our Guest restaurant in Walt Disney World Resort, the Beast Cast Member’s costume head came off while he was walking around the restaurant in full view of the restaurant patrons. In the footage, the Cast Member inside the Beast costume can clearly be seen briefly as the head is dislodged.

From the last screenshot of the video, shown below, it looks like the Cast Member very quickly fixes the error, puts the costume head back on, and continues in his role as the Beast without acknowledging it.

The video went viral and was shared and commented on multiple times, with many comments being negative ones. The opera singer apologized to the unnamed performer for sharing footage of the “unfortunate incident” and removed it shortly thereafter. Victoria Roland also did not name the Cast Member who had been helping her and her companions, “because I think what they did could get them more in trouble than the video that I posted,” she said in her apology and explanation on TikTok (shown below).

Roland then went on to explain what had happened. “Someone [a Cast Member] who had been part of the meal at Be Our Guest walked up to our table and said ‘Did you guys get a picture [of the incident]?’ like that: excited,” she said. “And we did, we got a video. And this person asked ‘send it to me. oh my gosh’.” The person then left to view the video and returned.

“‘I didn’t realize that had happened right in front of you guys’,” Roland said, quoting the Cast Member. “‘That’s hilarious’. When we asked if the performer was in trouble, the person said ‘There’s no way they will be. It wasn’t their fault.’ I said, ‘Don’t worry. we’re not gonna post it’,” Roland added. “to which this person replied ‘No. you should.'”

“If you looked through the comments, there were people working there that day who said ‘we’ve been waiting for this video’,” Roland added. “I was under the impression that the performer was friends with the people who worked at the restaurant…if that’s not the case, so sorry. I took it down because it seems to be making people feel in a negative way rather than a positive way and that’s never what I want”.

If the Cast Member’s fellow Cast Members were rooting for a viral video showing the costume malfunction, then that will obviously be distressing for many Guests who have thought of Disney’s Cast Member community as a positive one. Roland ended by defending the performer who was playing the Beast from the 1991 movie Beauty and the Beast. “I’m a performer [too],” she said. “Accidents happen. Mistakes happen. I thought he handled it incredibly well.”

Have you ever seen a Cast Member have an issue with a costume or fight to stay in character despite an ongoing challenge like a difficult Guest?