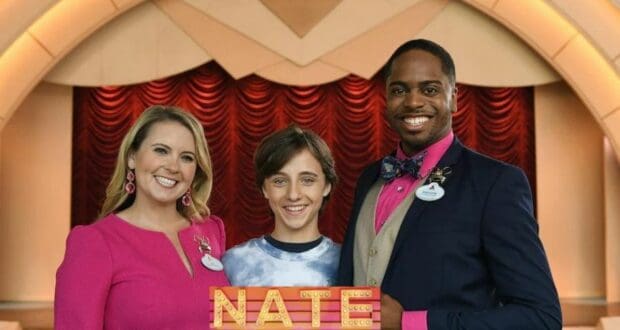 During the interview, Rueby Wood asked the two Disney Cast Members (who had both started their Disney careers in Disney Live Entertainment, with both Raevon Redding and Ali Manion acting as Character Performers and Redding portraying the first Black Face Character in Shanghai Disneyland) about their connections to the audition scenes from Better Nate Than Ever.

“I grew up performing,” Ali Manion told Rueby Wood. “I was a dancer, so seeing that audition process and Nate going through those auditions [in Better Nate Than Ever]…I related to his ambitions so much, because that’s what I wanted to do. I wanted to dance at Disney World.”

“I made it all the way through my very first audition with Disney Live Entertainment, and got a call that they selected someone else,” Raevon Redding said. “But I went back two auditions later, and then I was selected. I remember, I was like ‘I’m not gonna stop, I’m gonna keep going because I’m meant to be here'”.

Better Nate Than Ever is a “movie about theater” that Rueby Wood described as “the best of both worlds”, and a large focus in the movie is “struggling to discover your community and finding your light” as a child or teenager. Rueby Wood asked Ali and Raevon if they had noticed that level of special community within Walt Disney World Resort.

“Disney has set such a level and a bar of excellence,” Disney Ambassador Raevon Redding explained. “It really is a community and it really brings everyone together…[it] draws people in from all over the world.” Disney Ambassador Ali Manion confirmed that she had come to Disney from Louisiana, and Raevon’s work with Disney brought him all the way to Shanghai Disneyland!

Manion described her fellow Cast Members’ “passion for performing”, adding that she and Raevon “bonded instantly when we got this role because of our passion for show tunes”. “I felt like this is where I’m supposed to be [when I began working for Disney],” Manion summarized.

Many theater fans and aspiring actors or performers have been drawn to the story behind Better Nate Than Ever, and Rueby Wood asked if the two Disney performers could pass on any advice. “You’re gonna get a lot of no’s before you get that yes,” Ali Manion responded. “I’ve experienced that in theater and going to auditions — and also coming into this role, this wasn’t the first time I went through the selection process to become an ambassador. But I knew I had a passion for our Cast Members, and I knew timing was gonna be everything. And so trusting in that, I think is what got me through.”

Redding encouraged anyone dreaming of performing to “continue to audition [and] to continue to pursue those dreams”. “Keep dreaming big,” Manion finished. “With hard work and determination, that dream can come true”.

You can watch the full interview in the Youtube video above!