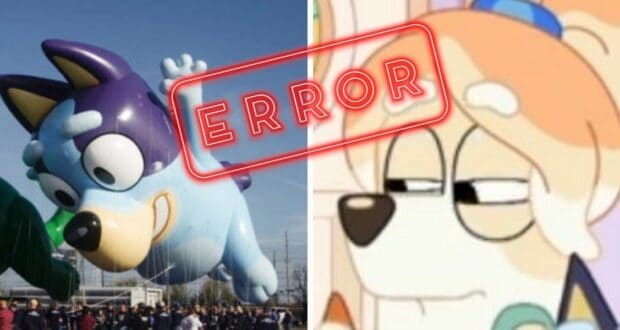 Disney has been a point of contention for many Disney enthusiasts in recent months — particularly when the topic of the new CEO has been raised —  and now Disney fans have found another bone to pick in terms of Disney content!

The children’s show Bluey has just gotten its own position in the Macy’s Thanksgiving Day parade, but a glaringly obvious error on the part of CBS journalists has apparently gotten Bluey fans riled up.

Bluey is a children’s show about a family of Australian Blue Heeler dogs. Although it is a Ludo Studio show, the Walt Disney Company got on board and Bluey can now be found on Disney Junior, the Disney Channel, and the streaming service Disney+.

Surprisingly, Bluey has actually endeared itself to a large number of adult viewers — in many cases, parents of young children who ended up watching the show alongside their kids — and it is these adults who have gotten upset after seeing the canine character Bluey’s big debut as a parade float in the Macy’s Thanksgiving Day Parade this year.

During the 96th Annual Macy’s Thanksgiving Day Parade. CBS reporters apparently repeatedly called Bluey (the popular protagonist who was being portrayed in float form for the first time) a male dog instead of a female dog. This error did not go unnoticed, and many Bluey fans took to Twitter to express their irritation at the “misgendering”.

they kept calling bluey "he" in the thanksgiving parade pic.twitter.com/lWpjmJuCcl

“Don’t disrespect the goat like that,” one fan wrote, presumably using “goat” as an acronym for Greatest of All Time. Bluey and her sister Bingo are the main protagonists who lead their parents (Australian blue heeler dogs Chilli and Bandit) into plenty of child-friendly adventures, so to Bluey fans, the failure to correctly identify Bluey as female is particularly irksome.

Some other fans, however, recognize that this is just a “minor controversy” and that it could be an understandable mistake if the journalists were not actually familiar with the Australian children’s show.

The fact the CBS crew on the Thanksgiving parade don’t know Bluey is a girl. Don’t disrespect the goat like that.

Minor controversy with the Thanksgiving day parade when the CBS crew kept on misgendering Bluey. pic.twitter.com/l5FIydH9dY

Do you think that this is an unforgivable error? What are your thoughts on the TV show Bluey? Let us know on Facebook, Instagram, and Twitter!