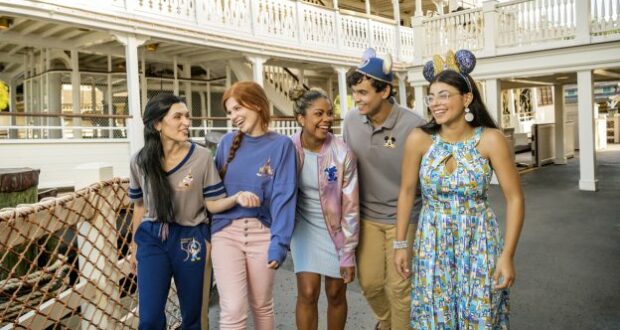 The term “Disney adult” is a popular term for adults who are obsessed with Disney, and it’s often used in a teasing or even negative way. It means more than just being an adult Disney fan or an avid theme park goer. Urban Dictionary has a few definitions to share. They state that Disney adults “may devote an unreasonably large portion of time or resources towards expressing their love of Disney.” Another Urban Dictionary entry put it more bluntly: “A millennial adult, with or without kids, that can’t stop talking about Disney… Even if they do have kids, they’re still way more obsessed with it than their kids ever would be… One of the most terrifyingly intense people you’ll ever encounter.”

Yes, you read that correctly- some folks consider Disney adults to be “terrifyingly intense.” As a proud Disney adult myself, I resemble that remark but prefer to think of it as “magical” intensity.

It’s time to wear the term “Disney Adult” with pride. What better way to gear up for the 50th Anniversary celebration at Walt Disney World than to check out these 50 signs that you may in fact be a Disney adult too? Let’s see how many of these you can check off!

7. You bought a Cricut or other cutting machine so you can make your own Disney shirts.

8. And then… People started asking you to make THEIR Disney shirts.  Maybe you even opened an Etsy shop!

9. You own some sort of Disney clothing that is not a shirt. Maybe it’s a tie or a poofy dress… and maybe you have a lot of them.

10. You have gotten skilled in the art of not eye rolling when someone tells you Disney news, as if you didn’t already know about it.

11. Your commute audio consists of Disney podcasts and trip reports from people you don’t know.

13. You know what it means to give and receive “pixie dust”.

14. You’ll happily head over to Disney Springs to stand in line for cookies at Gideon’s Bakehouse, then photograph every one for Instagram like the photo journalist that you are.

Related: Here’s Why Gideon’s Bakehouse at Disney Springs Is Irresistible

15. You talk about Disney every day. To everyone. All. The. Time.

16. When you heard that Disney stores were closing, you hurried out to make one last visit.

17. You know how to find Disney background music loops, and you play them in your house and at the office.

19. You hold a stance on the “correct” way to tour the parks.
Related: Rope Drop or Shut Down? Fans Debate the Best Disney Day Schedule

20. You encourage everyone to rope drop on their vacation, and you’re slightly offended when people tell you that they didn’t.

21. You also rope drop things in real life, and not just on Black Friday.  If you ever see me standing outside Target or Aldi at 7:59am, I hope you’ll stop and say “hello!”

22. You can’t wait to take selfies with the Disney Fab 50 statues and see the 50th anniversary decorations at the Magic Kingdom.

23. You believe that festive headwear is a must in the parks. Of course, you have multiple pairs of Minnie ears to choose from. Some people call them Mickey ears, but you know they’re wrong.

24. You’ve done some form of drinking or snacking “around the world” in EPCOT’s World Showcase. Let’s face it, you were probably wearing a special shirt for the occasion, too.

25. Disney has crept into your professional life.  You’re “the Disney person” at work.

26. When people talk about the last thing they binged on Netflix, you haven’t seen it because you’ve been devouring Behind the Attraction on Disney+.

27. The transition from FastPass to Disney Genie and Lightning Lanes is among your deepest concerns right now.

29. You cry when you enter the Magic Kingdom and see the castle for the first time on a trip.

30. You own Disney-themed decor for every holiday (I’ve yet to find a perfect Mickey turkey, so if you see one, let me know).

31. If you’re a Disney Fanatic who celebrates Christmas, there’s no doubt that you have Disney ornaments all over your tree…..

32. and if you’re anything like me, you had to add a second tree to your holiday décor just for your Disney ornaments.

33. There’s at least one picture of a dole whip in your phone.

34. You have a Disney Visa card, and you take advantage of the in-park photo ops and love the 10% discount on purchases of $50.

35. You don’t go anywhere else on vacation, and don’t see anything wrong with that.

36. Other people ask you for advice when planning their trips. Maybe you’ve even taken it pro as an Authorized Disney Travel Planner.

37. Your pet has a Disney name, collar, or outfit.

38. Your child could probably plan someone else’s Disney trip.

39. You’ve pulled off a great trip surprise (and took video, of course) for your kids. Or, if you’re like me and can’t keep a secret, you include your kiddo(s) in the planning.

40. You probably love Disney even more than your young children do. They love Disney, but you need Disney. And one day, they’ll be just like you.

41. You’re into Star Wars, too, and absolutely have your own lightsaber. You’ve got to protect yourself from your children, after all.

42. You’ve probably Disney-bounded or at least had a Disney costume at some point. You’ve already picked out your Disney Halloween costume for this year, haven’t you?

43. On one of your tech devices, there’s a background that features Cinderella’s castle or Spaceship Earth.

44. You match your outfit to the park you’re going to. For instance, you have animal print Disney gear for a trip to Disney’s Animal Kingdom, Figment shirts for Epcot, Star Wars gear for Disney’s Hollywood Studios, and castle gear for the Magic Kingdom.

45. There are things that you enjoyed so much at a Disney resort that you had to have them at home. You may be into the H20 shampoo, the Tiki lamp in the Polynesian Guest rooms, or the exact pillows they use on resort beds.

46. You’ve taken a selfie with a Disney Character and posted it on social media.

47. You feel genuinely upset when you know someone is embarking on a vacation without reservations or some kind of plan. When you hear about people going and waiting in lines and not going on many attractions, your heart hurts.

48. You truly consider Walt Disney World resort (or Disneyland) your home away from home.

49. You may not devour national news, but you’re well up to date on the progress for Guardians of the Galaxy: Cosmic Rewind.

50. You still believe in Disney magic, no matter what.