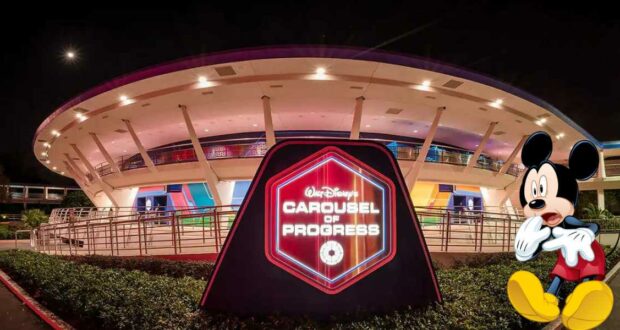 A historic and beloved Disney attraction suffered a breakdown, and Guests who were on it had to be evacuated mid-show.

There are many a wonderful Disney World ride and attraction that Guests like to frequent while at the Disney Theme Park. Think “Space Mountain,” “Haunted Mansion,” and “Jungle Cruise” in Magic Kingdom, “Twilight Zone Tower of Terror” in Disney’s Hollywood Studios, “Spaceship Earth” in EPCOT, and more.  But sometimes, things go awry at a Disney Park. Rides break down, Guests get into arguments (with each other or Cast Members) and the magical Disney experience becomes a little less magical. That’s what happened to one Disney Guest who shared their evacuation story online.

Reddit user u/wooshylife shared a photo of the breakdown on the social media platform.

The OP also added in a later comment to contextualize the situation, “Carousel of Progress broke down today. The stage lights were on for the first two scenes and a bit of the third scene. The backstage could be seen in the transition to the third scene. The stage lights turned off in the blown fuse scene and it played normally. Going into the fourth scene, Rover was stuck with his head up and John did not move except for his foot and his blinking function. In the middle of the fifth scene we were told cast members would be with us shortly and after the scene ended we were evacuated off of the ride. Also in the fifth scene the dinner table had new chairs.”

Other fans in the comments shared their own breakdown stories from “Pirates of the Caribbean,” “it’s a small world,” among others. Some also shared their stories from Carousel of Progress. Some Guests, like u/Wrestling_poker shared that they’ve spent over 250+ in the Parks but have never once gotten stuck and been evacuated from a ride.

Here’s what the Disney World website says about the attraction,

Follow an American family over 4 generations of progress and watch technology transform their lives.

During each era, learn how the technological marvels of the day made life more comfortable—and paved the way for unimaginable innovations.

Discover how gas lamps, the hand-cranked washing machine and gramophone made the pre-electric era a breeze.

Watch the advent of electricity give rise to modern conveniences like the electric iron, the radio—and the simple, revolutionary light bulb.

See how the automatic dishwasher and television set transformed the American household.