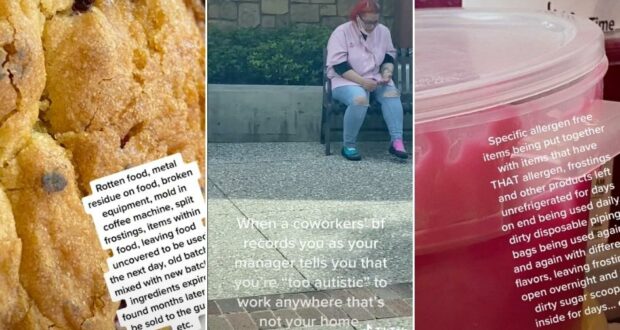 The complaints with Disney keep rolling in, and in the latest, a Disney bakery was accused of serving expired food, ignoring allergies, and mistreating employees.

Visiting Walt Disney World, whether Magic Kingdom Park, EPCOT, Disney’s Animal Kingdom, or Disney’s Hollywood Studios in Florida, is always an experience to write home about. Any Disney Park is a great place for a Disney vacation and is the perfect place for a magical Disney experience. But things go awry, and lately, there have been more than a few issues being reported. This isn’t limited to only a Disney Theme Park. It also includes the Disney property in the Walt Disney World Resort, Disney Springs.

One TikTok account, @exposingjobs, has lately been to exposing one of these many bakeries for mistreating its employees and serving inedible food. The account shared its first exposé on Monday, and followed it up with more videos after that.

The first few videos displayed rock-hard cupcakes and eclairs, with their staleness being shown by being banged against the countertops. Later, the account posted a video of coconut milk that was left out to rot so long it turned into “cheese.”

Per employees, they were told to still use it in baked goods.

The account owner claimed to have quit her job due to disability discrimination. The account also has a video of a coworker’s boyfriend recording a manager telling her she was “too autistic” to work anywhere but her home. While it’s unclear what the conversation going on is of, it is available to watch.
The Disney Resort is known to be a place of magic, but these reports — though unconfirmed at this point and not commented on by Disney — leave quite a bad taste in the mouth.
We at Disney Fanatic will keep readers updated on all Disney news as it comes to light.
Disney Springs The Walt Disney World Resort Walt Disney World 2022-10-12
Priyanka
Previous: Fans Celebrate Disney Park Removal, Finally Able to ‘Enjoy the View’
Next: Angry Disney Fans Get Their Revenge Online After Price Hikes