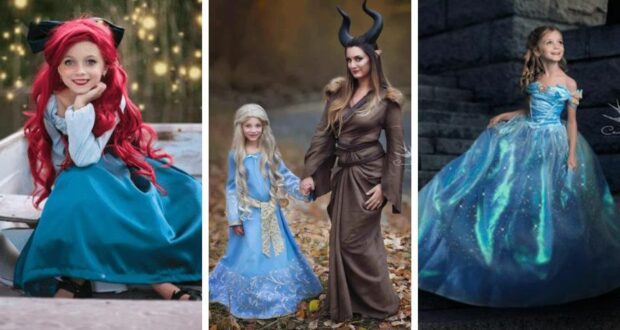 There are plenty of Disney fans in the world (even if Disney fans these days have often had some doubts about the Walt Disney Company), and Disney fans’ level of commitment can vary. Some fans would prefer to Disneybound in the Disney Parks while wearing a simple but fashionable Minnie Mouse outfit.

Camillia Court is a Canadian photographer who fell in love with Disney and passed on her Disney fanatic status to her daughter Layla. The duo now consider themselves to be  “character artists”, having solidified their passion for Disney transformations after Layla experienced the magic of a Bibbidi Bobbidi Boutique makeover and saw herself becoming Queen Elsa back in 2014.

Now, Camillia and Layla have shared many pictures from their monthly Disney photoshoots and their Magical World of Princesses photograph series. Camillia has shared the photographs on her Facebook page and received many positive responses from her newfound fans. Take a look at some of the photos below! Layla dresses up as plenty of Disney princesses during the photoshoots with her mother, but these pictures of Layla portraying Ariel the little mermaid and portraying Cinderella (in her signature Lily James ballgown, shown below) are particularly eye-catching! Layla in costume as Ariel from Disney’s “The Little Mermaid”/Credit: Camillia Courts Photography

The duo has also dressed up and posed as lesser-known Disney characters or villainous characters like Maleficent, Cruella DeVil, and Ursula — or superheroes, such as Viola Incredible.