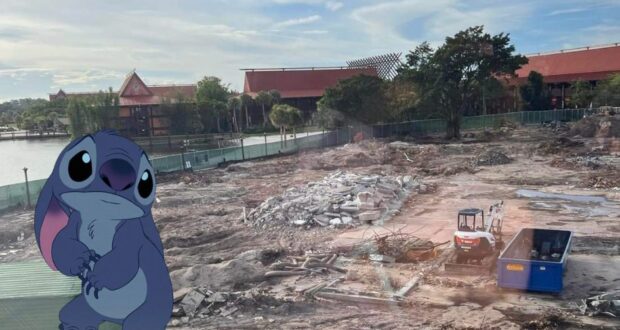 Last Remaining Piece of Disney’s ‘Spirit of Aloha’ Will SURVIVE!

There have been a lot of changes unfolding at Walt Disney World Resort in recent months. Disney news has brought its ups and downs. Now, we’re happy to see a piece of the Spirit of Aloha Dinner Show will survive.

We’re thrilled with the exciting news that more character dining experiences are returning to Walt Disney World, along with news of the reimagined Victoria & Albert’s reopening soon at Disney’s Grand Floridian Resort.

With the good comes the bad, as we’ve had to say goodbye to the fan-favorite Spirit of Aloha Dinner Show at Disney’s Polynesian Village Resort.

Demolition photos of the iconic show are painful to see, as Disney seems to be getting rid of the old in several locations to bring in the new – such as ESPN Club’s removal to bring in a new Cake Bake Shop.

And in the former Spirit of Aloha location, Disney has announced the arrival of a new Polynesian Tower, which will provide several additional rooms with Seven Seas Lagoon views for the popular Deluxe Monorail Resort.

The debate on if the hotel tower is a good move for Disney or one that doesn’t match the current Polynesian Resort feel will continue until we see and experience the new tower.

Now, we’re seeing the last remaining piece of Disney’s Spirit of Aloha will thankfully survive the demolition! @bioreconstruct took to social media to post the photo below along with, “Banyan tree prepared to be transplanted. Currently at site of a new Disney Vacation Club tower at Polynesian Resort.”

Tikiman’s Unofficial Polynesian Resort Pages also took to social media noting, “The Strangler Fig has a transport box placed around it and is all dug out and ready to be transported to a new location.”

The post continues with a photo of the plaque on the tree which reads:

“This Strangler Fig” is one of the most curious and interesting trees here at Disney’s Polynesian Resort. It sprouted from a bird’s nest and is overtaking its’ host, the sabal palm (Sabal palmetto). It will, after a long period of time, kill the host by covering it with too much shade or by encircling the trunk and preventing it from expanding.”

“The host is often a sabal palm because it has a fibrous, criss-cross pattern of old leaf bases around the trunk, which are ideal for the fig to root in. Strangler figs can be planted directly in the ground but generally will not grow as tall. This tree is protected from freezing temperatures every winter with portable diesel heaters and a large surrounding canopy.”

Where the stunning tree will be translated to is still a mystery, but as you can see in the picture, it looks like it’s ready to go.

One of the comments on the tweet from @bioreconstruct notes, “My BFF got married by that tree. So sad they destroyed that beautiful little area.”

It may just be a single tree, but we love the history and that Disney is taking the time to transplant it – wherever it may be headed!

Missing the Aloha Show? Universal Orlando Resort has returned its Polynesian Luau just up the road from the Disney bubble.