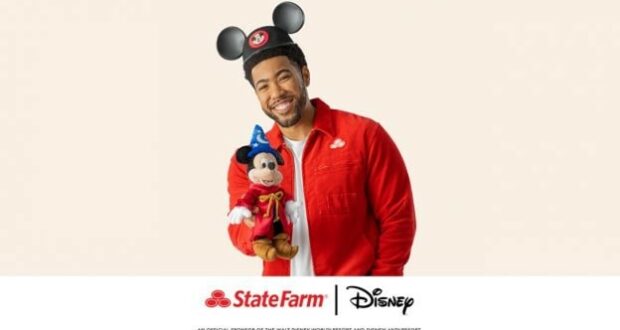 The Disney Parks Blog announced today that State Farm and Disney have just teamed up “to create good neighbor magic”! Chelsea Burnett, an Alliance Manager for Disney Corporate Alliances, said in the blog post that State Farm and Disney have “a new, multi-year relationship spanning Disney Parks and Resorts and Disney Advertising Sales, allowing both brands to engage in new and important ways together”.
One of the most notable ways that the two companies’ partnership will be announced will be through the new planDisney podcast (which is a podcast on which “expert planDisney panelists will offer insightful tips, helpful suggestions and inside looks for Guests preparing for an upcoming magical vacation to Disney Parks and Resorts”). State Farm will apparently be “the presenting sponsor” of the podcast.
The “Five Fantastic Things to Watch This Weekend” segment on the weekly D23 podcast will also be sponsored by State Farm! Chelsea Burnett referenced the famous State Farm motto within the blog post, which is: “Like a good neighbor, State Farm is there”. “For nearly 100 years, State Farm has fostered a sense of community built on the foundational value of being a good neighbor,” Burnett wrote in the blog post.

The partnership between Disney and State Farm was also celebrated when State Farm and “Good Morning America” gifted a mother and daughter (who run a charitable lemonade stand in North Carolina) with a trip to Walt Disney World Resort! Check out the surprise in the video above!

What do you think of this new Disney partnership with State Farm?