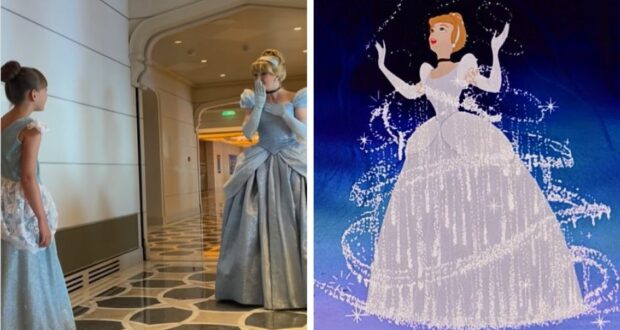 The Walt Disney Company might have Disney Cruise Line cruise ships, Walt Disney World Resort, Disneyland Resort, and several Disney Resorts across the globe — but any Disney Guest can agree that magical Disney moments are really about the momentary interactions between Disney characters or Cast Members and Guests, no matter which Disney location is involved!

One such endearing and heartwarming recently happened onboard the new Disney cruise ship the Disney Wish, and it features the classic Disney princess who inspired a very important part of the Disney Wish design! Cinderella herself inspired the Grand Atrium that serves as the focal point for Disney Cruise Line Guests when they first enter the new interior of the Disney Wish (a Disney cruise ship that also stands out due to its next-level interactive options for Guests’ adventures at sea), and one young Disney Wish passenger was able to share a cute experience with the ballgown-wearing Disney princess.

A family of Disney fans shared footage on Instagram of their daughter Riley onboard the Disney Wish, participating in a magical Cinderella transformation while the ‘real’ Cinderella joined in. Riley’s mother, who seems to run the Instagram account and is a self-taught seamstress, has made many of Riley’s Disney princess outfits herself. This most recent outfit was a magical dress that started out as Cinderella’s peasant dress from her days at home with Lady Tremaine and her ugly stepsisters — and then shifts into the dreamy Cinderella ballgown that became iconic in the 1950 film!

Many young actresses playing Cinderella use the same kind of dress onstage to act out the magical Fairy Godmother scene; as the girl twrisl, she pulls off the first peasant portion of the dress to reveal the ballgown beneath. However, the costume usually isn’t homemade! Take a look at Cinderella and Riley’s time together below — and Riley’s ascent up the Grand Atrium stairs as a Disney princess!

A post shared by Riley & Liam in Disneyland (@randomly_riley)

Have you ever had a special private moment with a Disney princess? Do you have a Cinderella costume or another Disney costume?