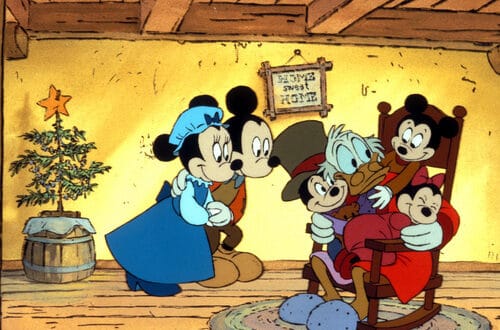 Do You Recognize All the Classic Disney Characters in Their Roles in ‘Mickey’s A Christmas Carol’? We’ve Got the Cast List!

If you are a diehard Disney fanatic, who just loves the timeless Mickey and Friends classics, then you will probably proudly admit to having watched Mickey’s A Christmas Carol at least once already this holiday season. A shorter, more family-friendly retelling of the classic Dickens story that’s so hallmark around this time of year, one of the things we Disney fans love best is that Mickey’s A Christmas Carol features an entire cast ensemble of characters that have appeared in various other Disney works throughout the years.

From key players to even background extras making a cameo of sorts, each and every one has had a presence in a previous Walt Disney work prior. Can you spot each and every one? To help you out, we’re pointing out who’s who, what role they are filling here, where you might have seen them before.

Related: Mickey’s Christmas Carol: What You Might Have Missed

First and foremost, we present the one and only Mickey Mouse—our most iconic of all classic Disney characters. In this film, Mickey is filling the role of Bob Cratchit—the humble, kindhearted clerk to the story’s greedy, miserly main character. Although it is more the norm to have Mickey play the star in a presentation where he is featured, given the nature of the primary protagonist in contrast to Mickey’s positive character portrayal, it would have been extremely out of character and disappointing to Mickey fans in particular had he taken to the less favorable starring role here. That’s why acting as the likable supporting character is far better suited to Mickey’s demeanor.

Who better to fill the role of the film’s vilified starring role than a classic Disney character who was modeled after the very personage he is portraying here? That’s right, Scrooge McDuck was not a unique character creation designed for this presentation exclusively. He’s been around since 1947, in fact, having been created by Carl Barks and appearing in various Disney comics as Donald’s rich Scottish uncle.

He was admittedly modeled after the Ebenezer Scrooge character from the Dickens classic A Christmas Carol, as evident by his fortune as well as the very obvious use of the name “Scrooge,” though in different format. He was intended to be only a short-lived character, but his popularly with audiences landed him a recurring presence in Disney works from then on out. So it goes without saying that Scrooge McDuck is the uncontested character at large to portray his namesake and very basis for his being.

It goes without saying that Donald Duck, who is the nephew to “Uncle Scrooge” would be the one to portray his on-screen nephew in this production as well. And with his very traditional Donald-like way of speaking minus his usual plucky pessimism, he brings a very refreshing, amusing presence to the role of Fred.

Related: 10 Things You Should Know About Walt Disney’s Donald Duck

13. Ratty and Moley (Collectors for the Poor)

You may or may not have recognized those two rodent-like characters at the beginning who come to Scrooge in hopes of collecting for the poor. They are none other than Ratty and Moley, two characters who earlier appeared in Disney’s The Adventures of Ichabod and Mr. Toad from 1949.

For anyone who has ever seen Disney’s all-animal adaptation of Robin Hood from 1973 you quite possibly noticed the cameo by Otto—the elderly brown dog appearing as a beggar on the streets here.

Goofy really stepped out of character to portray the ghost of this harsh, selfish, now-deceased miser with a reputation that could even give Scrooge a run for his money. Even so, Goofy’s presence takes a bit of the edge off of Jacob Marley’s sinister nature, replacing it with clumsy comic relief.

10. Jiminy Cricket (Ghost of Christmas Past)

This guiding conscience we know so well from Disney’s Pinocchio couldn’t be better suited for the role of the Ghost of Christmas Past. Described by as small in stature in the classic story, Jiminy Cricket fits the bill here as well. But it’s his rational roundabout way of expressing reflections on the past that really drive the point home.

We catch a glimpse briefly of Fezziwig during the party scene Scrooge and the Ghost of Christmas Past revisit—a scene that also spotlights many other cameos we will touch on later. While some younger viewers may not immediately recognize the Mr. Toad character in the role of Fezziwig, many older fans immediately get the character reference.

While Daisy is more often paired with Donald than any other duck character, the fact that the party scene takes place in the past, at a time when Ebenezer Scrooge was much younger, Daisy does well in fulfilling the role of Isabelle—a former love interest lost to Scrooge by his greed.

This previously antagonist character, who made his debut in Mickey and the Beanstalk from 1947, has been featured in more favorable roles throughout the years since. He continues popping up in various other Disney features as more of a benevolent goofball than an actual bad guy, and this presentation is no exception. His large stature is what surely earned him the role of the Ghost of Christmas Present here, and he carries it out exceptionally well.

Who better to play Bob Cratchit’s wife than Mickey’s real-life significant other? Here you have the one and only Minnie Mouse filling the role in a perfect character assignment that was practically made for her.

These are Minnie’s two nieces, but in this case one (or both taking turns acting in a singular role) is portraying the Cratchit daughter Martha.

This time it’s Mickey’s two nephews filling roles as Cratchit children. But in their case, both get screen time—one playing Peter and the other warming hearts in a portrayal of Tiny Tim.

This longtime Disney nemesis has a history dating back to as early as 1925. And given his unfavorable, albeit popular presence, he makes the perfect Ghost of Christmas Future—once his hood comes off and his identity is revealed, that is.

Also during the part of the movie where the tentative future is revealed to Scrooge, we get a glimpse of a couple of weasel gravediggers. While less popular, classic Disney fans may recognize these as being the weasels from The Adventures of Ichabod and Mr. Toad.

Mickey’s A Christmas Carol remains a timeless holiday staple among Disney fans of all ages. It pays tribute to classic Disney to be appreciated by older viewers while also creating fresh interests for younger ones. We encourage you to sit down as a family and watch this heartwarming Christmas movie together.