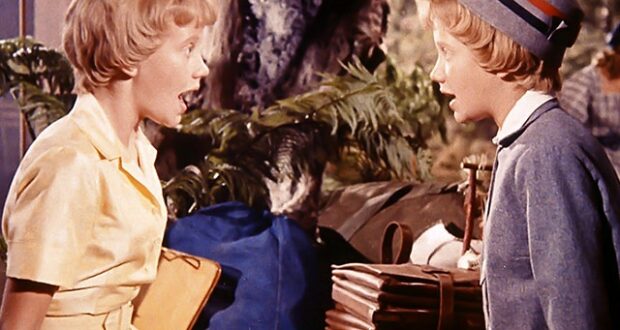 If you just happen to be a diehard Disney fanatic looking to get a twice as nice fixing by bingeing on some twin-centric Disney movies and shows, then we’ve got a couple of suggestions.

Related: Who Is Your Disney Princess Twin?

It’s been long debated on whether or not the classic chipmunk duo we know as “Chip and Dale” are in fact twins. If they are, they are clearly not identical, as Chip sports a little black nose and front teeth that are evenly spaced together whereas Dale has a larger, red nose, two adjacent front teeth, and a bit of a flyaway tuft of hair. Furthermore, Chip appears to be more the brains of the duo while Dale is a little less sharp in comparison. Whether they truly are twins or not, what we do know for a fact is that they are chipmunk brothers.

And for the sake of Twin Day, we’d like to declare them as being such. So, to celebrate Twin Day in a Chip and Dale kind of way, you have plenty of cartoon classic shorts to opt for. But perhaps your best consideration would be a re-watch of their popular cartoon series from the late 80s to the early 90s—Chip ‘n Dale Rescue Rangers and then tune into the newer Chip ‘N’ Dale Park Life from 2021.

In 1995 The Magical World of Disney did a remake of the first film—Escape to Witch Mountain, and then more recently, in 2009, they released the reboot Race to Witch Mountain, which was shown in theaters. While each and every one of these films has their own tailored differences, the one underlying theme prevalent in all is that the plot centers around two twins—a boy and a girl, who possess special powers, owing to the fact that they are not of this planet.

Related: 22 of the Best Disney Movies To Watch for Halloween

While the twins highlighted here don’t necessarily take centerstage (though their characters would certainly like to think so), you can watch the original three movies from Disney’s High School Musical franchise for an alternate twin fixing. We’re of course referring to the brother and sister twin duo of Ryan and Sharpay Evans. Because high school drama can be petty in general, these two were meant to be double-trouble antagonists throughout the first two films, with more of a positive presence emerging only in third and final film. Even so, their characters are well-liked by fans even when presented at their worst. Their biggest flaws? Over-inflated egos and a tendency to steal the show, trying to outperform all their high school peers and contenders.

Released as a Disney Channel Original Movie back in 2002, this film is based on the real-life stories of twin professional basketball players Heidi and Heather Burge, from their earlier years as teenagers growing up in 1985 to their eventual rise to fame, in addition to all the family and school drama they encountered along the way. It’s a great uplifting film to want to watch, especially if you are a fan of women’s basketball, have a sports-minded sibling, or both.

We usually recommend this doubly delightful set of flicks for Halloween viewing, but if you’re looking to get your twin fixing, you can’t go wrong with this set. First released in 2005, the story follows identical twins (played by Tia and Tamera Mowry) who were separated at birth. Upon being reunited with one another they also discover that they are witches, who possess magical powers. Because the film was so popular with fans the sequel, Twitches Too, came out two years later, taking the original story a bit further.

3. The Suite Life of Zack and Cody

If you were a faithful fan of the Disney Channel all through the first decade of the 2000s, then you probably remember The Suite Life of Zack and Cody, which ran from 2005 to 2008, followed by The Suite Life on Deck, from 2008 through 2011. The storyline for both series followed twin brothers Zack and Cody Martin (portrayed by Cole and Dylan Sprouse) first as double-trouble residents at the famed Tipton Hotel (a parody of the Hilton) and then joining in a whole new series of misadventures at home on the seas. There was even a follow-up movie released in 2011. All make for excellent binge watching this National Twin Day.

This was another widely popular Disney Channel Original series centering around twins, which ran between 2013 and 2017. Starring Dove Cameron, who does double work delivering on both title roles, this series was such a hit that it’s still being aired frequently on the Disney Channel as well as on Disney+. Here you have two identical twin sisters who are vastly different. One is a celebrity actress/singer and the other is a competitive athlete. Consider spending the entire day with them both by bingeing on the entire series for the ultimate twin celebration.

Related: Dove Cameron Reflects On Her Time As A Disney Channel Star

Hands down, this story is the most widely acclaimed classic about twins ever produced by Disney. The original was released in 1961 and starred Hayley Mills in both twin roles—that of California girl, Susan who lives with her father and that of Bostonian teen Sharon, who makes her home with her mother and mother’s family. Both girls meet at camp, discover that they are long-lost twins, and come up with the ultimate plot to get their divorced parents back together through a cleaver means of switching places.

The storyline was rebooted for a 1998 release, and starred Lindsay Lohan as the twins—this time Californian Hallie and Annie from Great Britain. There have been other sequels from the Hayley Mills following throughout the years as well, including the The Parent Trap II, which was released in 1986 and The Parent Trap III in 1989—which actually triples the delights in a storyline welcoming in three identical leads.

Disney entertainment always goes above and beyond the singular standard in all of its works. But when you treat yourself to these twice-as-nice twin specifics the double delights get even more doubly delightful!