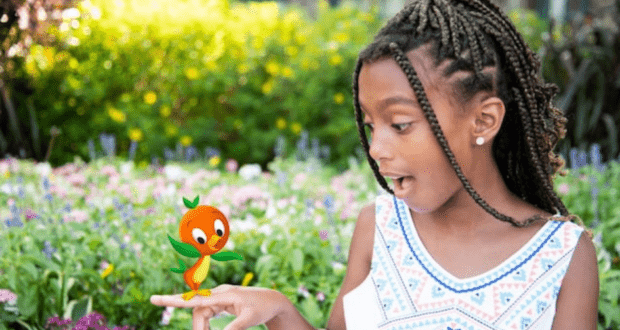 Everything You Need to Know Now About Disney PhotoPass Services

They say a picture is worth a thousand words. Well, a vacation to Walt Disney World Resort is worth an infinite number of smiles. So why not capture as many smiles as possible with as many pictures as you can?

If the idea of being bogged down with a camera or missing out on being included in memorable shots because you’re the one doing all the snapping has you at a disadvantage, why not let Disney handle it all for you? Along with all the already awesome perks they offer Guests is their convenient, complimentary professional photography service known as Disney PhotoPass. 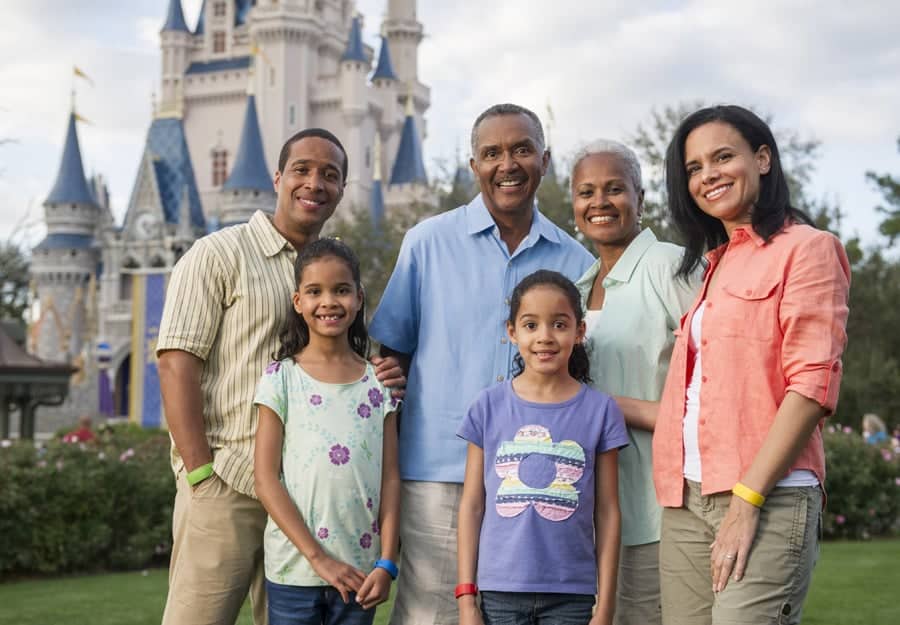 Whether you are largely unfamiliar with Disney PhotoPass services in general, or you’re looking to learn more about all the updated inclusions PhotoPass currently has to offer, here is everything a Disney World Guest needs to know about Disney PhotoPass right now. 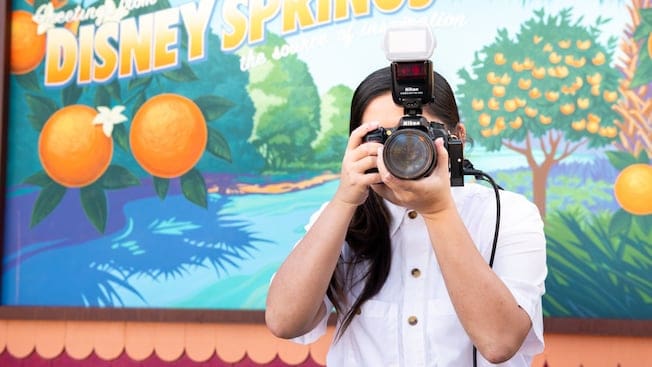 What is Disney PhotoPass?

Disney PhotoPass debuted at Walt Disney World Resort back in 2004 as a professional photography service offered to Guests looking to get in optimal shots at some of the most iconic locations and landmarks throughout the various Parks. Since then, it has become a popular and convenient alternative to lugging your own camera with you everywhere you go. It’s also a sure way to get every member in your party included in the shots. 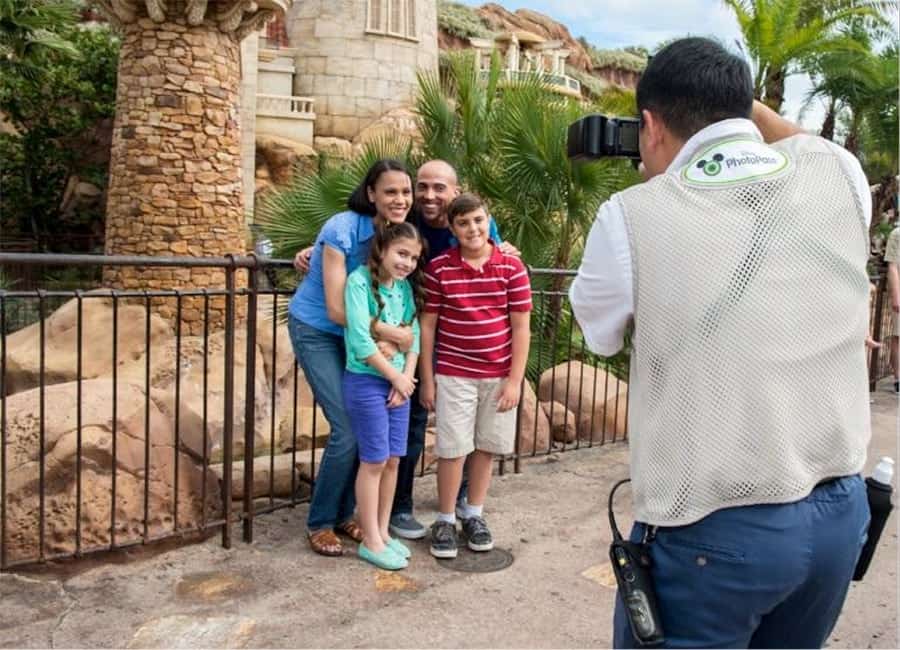 PhotoPass photo opportunities are available for free to every Guest visiting Walt Disney World Resort. Simply walk up to one of the Cast Member photographers stationed at a specific hotspot location (ex. Cinderella Castle), and ask to have your picture taken. These professional photographers will happily snap photos of you and your party.

In order to access your shots, you will be asked to connect your MyDisneyExperience account by scanning either your MagicBand, physical Theme Park ticket or Annual Pass, Disney’s MagicMobile services, or various other alternative means. The simplest way to go about it, though, is to request a PhotoPass Card from the photographer, which you can then use for visiting other PhotoPass locations going forward. Then, use the card to later link all of the pictures to your account and view them online. If you have the My Disney Experience app for smart devices, you will be able to see some of your photos within a matter of minutes. There are also a number of locations all throughout Walt Disney World Resort that allow you to view your pictures. 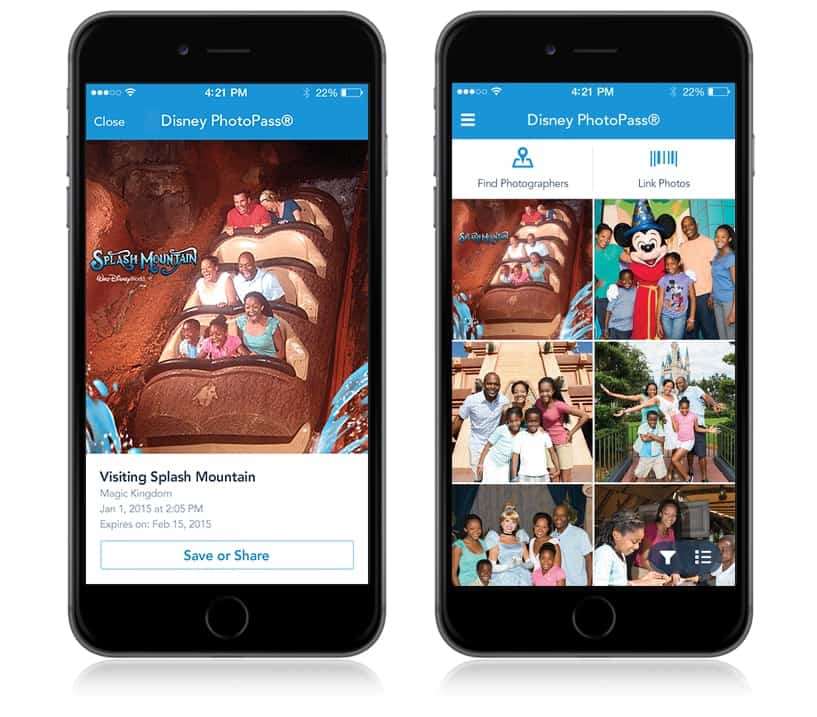 It should be noted that Disney PhotoPass photos are not limited to just a series of standard shots at various renowned locations. The service also retains any Character Meet and Greet shots featuring you or various members of your party and will even automatically store videos and screen captures taken from various rides and attractions. Additional professional stock image photos of famed iconic landmarks will also be included in your accessible photos via the online gallery. 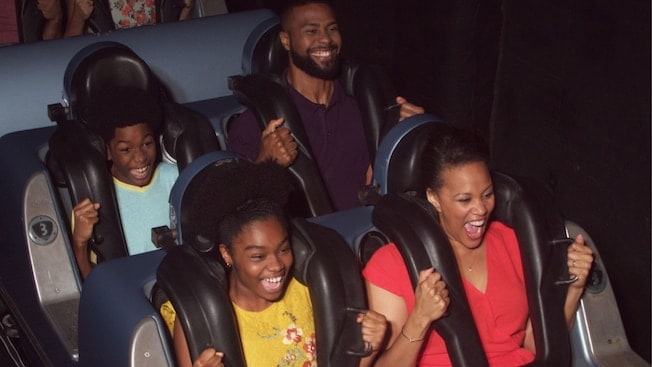 Disney World Park photos remain accessible online for up to 45 days following the date on which they are taken, giving Guests more than enough time to decide if they want to officially purchase those pictures via Disney’s Memory Maker.

While there is no cost for utilizing Disney PhotoPass services, downloading those shots you hope to keep does come at a starting cost of $18.95 (plus tax) per photograph, with some prices running higher depending on the size or item, as there are many options for having customized products created as well. The prospect may sound daunting to those who hope to secure endless PhotoPass photos, but that’s where the magic of Memory Maker comes in.

Designed as a way to capture endless memories offered at a purchasable, flat-rate price, there are currently two existing Memory Maker packages available. The first is the Memory Maker One Day option, which allows for unlimited photos and videos for a single day at a starting price of $69 (plus tax). The second, arguably more beneficial suggestion, is the regular Memory Maker package, which knows no limitations. When purchased three or more days prior to your trip, the all-inclusive rate is just $169 (plus tax) for as many pictures as you end up with. You may also purchase Memory Maker closer to the trip or even while already in the Parks for a starting cost of $199 (plus tax). 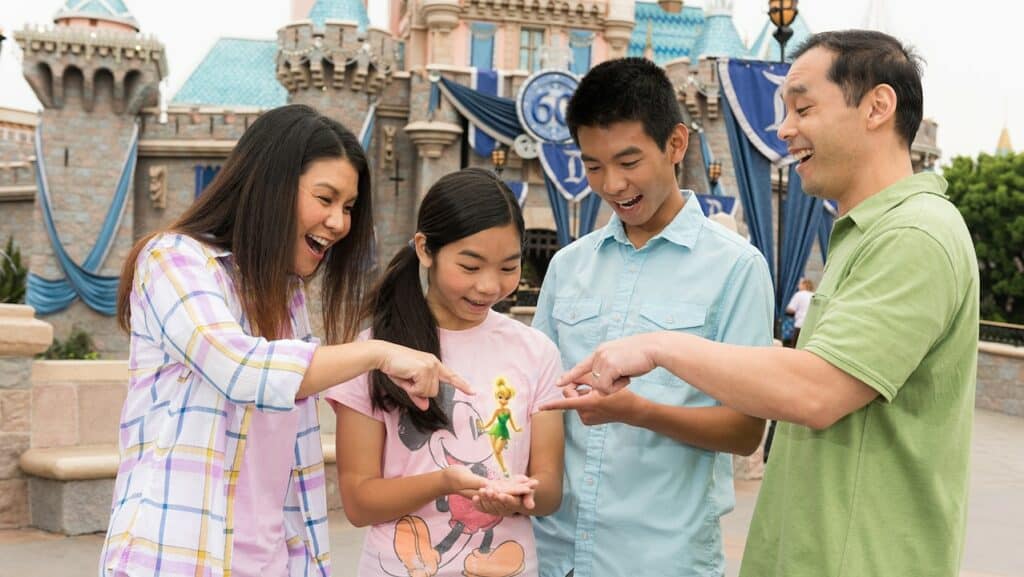 Related: Is Memory Maker Worth the Cost for Your Next Walt Disney World Vacation?

One of the most unique features of having pictures taken by a PhotoPass photographer is the incorporation of magical enhancements in some of the shots. From adding beloved Disney characters into the photo to incorporating special effects—sometimes they even have you star in a short video clip featuring a Disney favorite–these are all premium photo ops you just wouldn’t get if you were left to taking the photos on your own. And the great news is that all Magic Shot Exclusives are automatically included along with PhotoPass complimentary services at no additional cost. 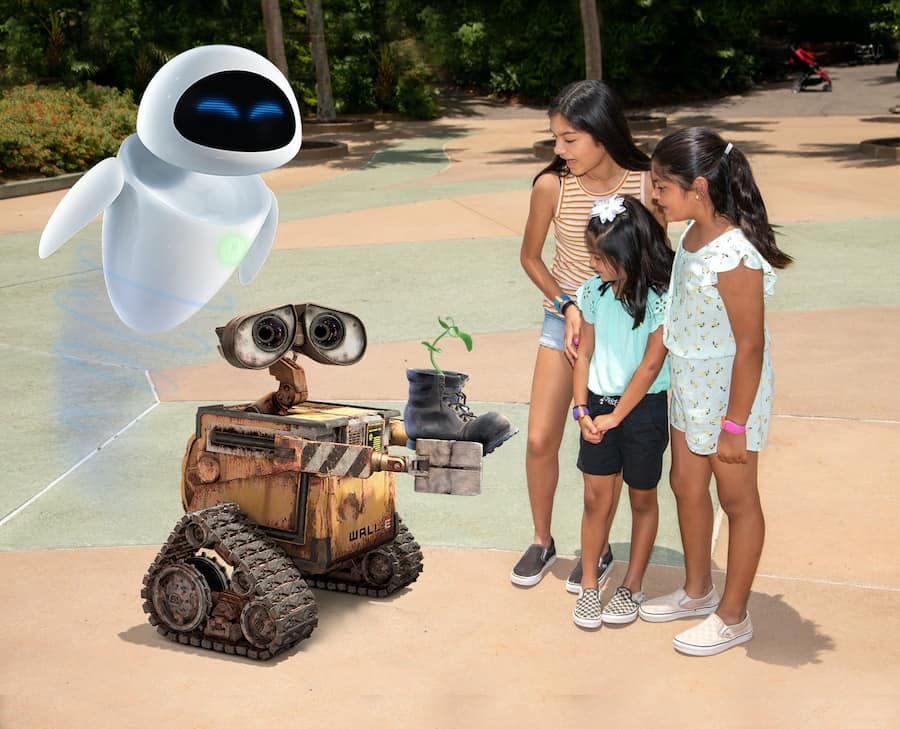 Joining the great lineup of Magic Shot offerings is the more recent addition of Tiny World Magic Shots. Taken as 360-degree screen captures, these shots place you right in the heart of the action via a most unique vantage point that makes you feel, quite literally, like the center of everything. It’s also a subtle reiteration of the fact that it really is “a small world after all.” 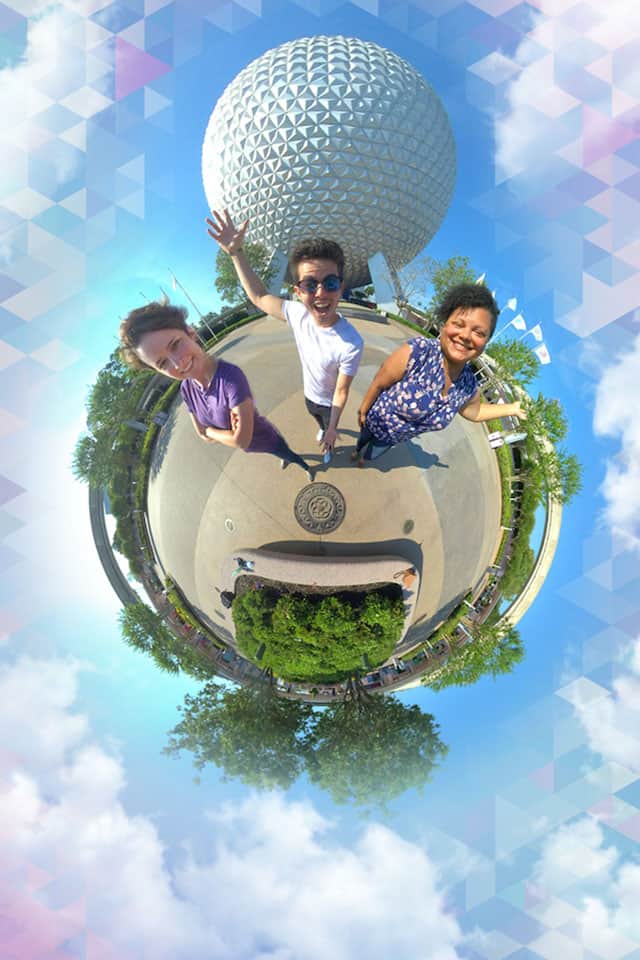 Super Zoom Magic Shots are among the other awesome options that have been more recently cultivated. They comprise a series of pictures taken from an expansive distance through powerful zoom lenses, all coming together in collaboration via a detailed street scene depiction starring you and your party, out and about enjoying some well-deserved Park time. Current locations that offer Super Zoom Magic Shots include Cinderella Castle in Magic Kingdom Park, Spaceship Earth in EPCOT, Star Wars: Galaxy’s Edge at Hollywood Studios, and across from Expedition Everest at Animal Kingdom Park. 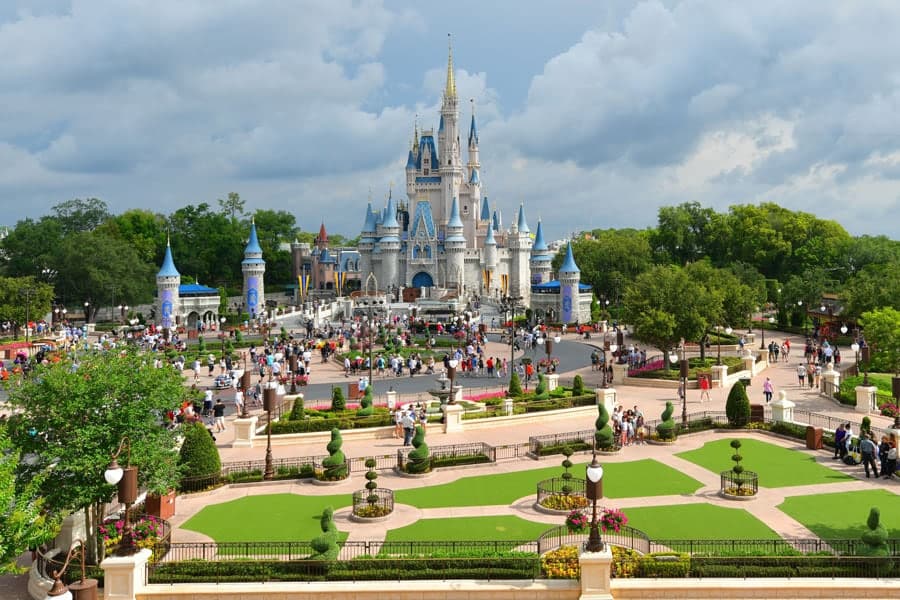 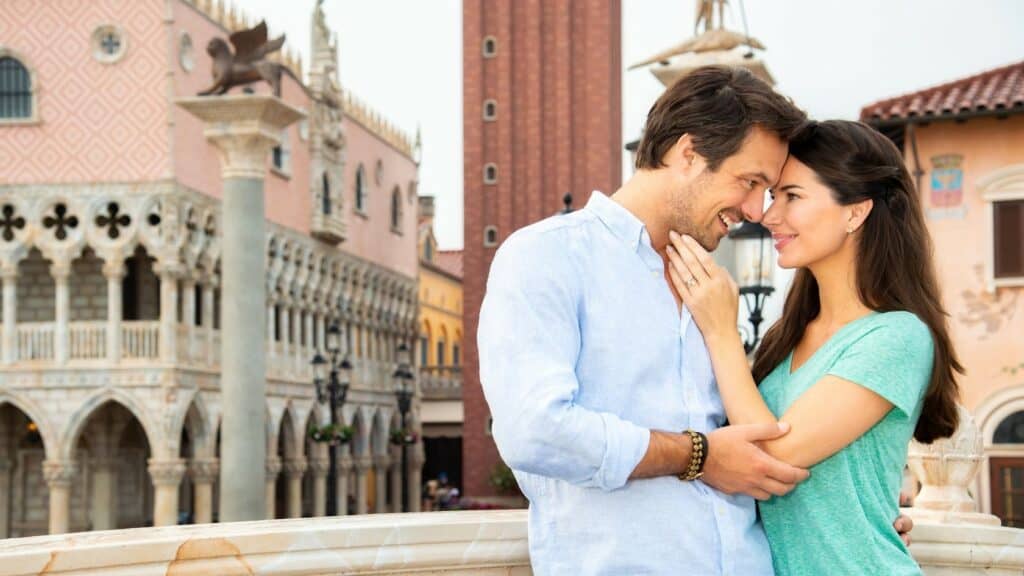 Related: “Capture Your Moment” by PhotoPass to Expand to All Walt Disney World Parks

Did you know that you can even jump into a fun-themed Disney scene and strike a pose alongside your favorite characters?

Taking special effects to a whole other level, just head on over to one of two great Disney PhotoPass Studio locations that feature interactive backdrops in addition to the presence of your preferred pals. One option is right on location at Magic Kingdom Park’s own Sir Mickey’s shop in Fantasyland. Another can be found over in Disney Springs Marketplace.

No reservations are required. You need only show up and collaborate with professional photographers onsite to work all the magic to your advantage. Utilizing green-screen technology, they will virtualize the backdrop and set you to decide from among a broad range of available options. Some shoots even incorporate special props or invite Guests to dress up in accordance with the theme at hand. 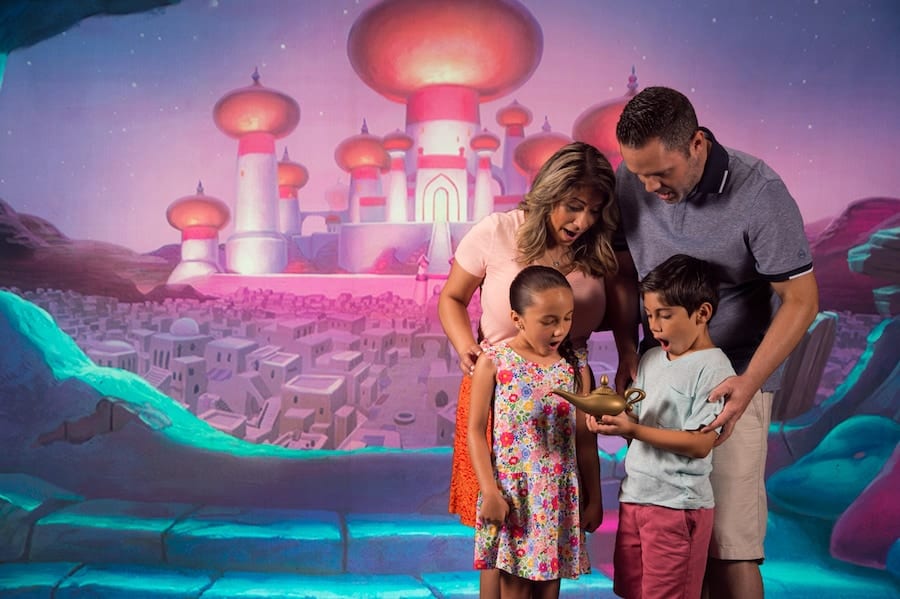 Like Disney’s PhotoPass service in general, all of the Magic Shot options are offered as part of the all-inclusive free package deal (minus the individual purchase rates for each photo if you do not select Memory Maker). There are, however, a couple of exciting extras you may opt for at an additional rate. One such offer is unlocking exclusive Lenses at specific locations throughout Walt Disney World Resort—creating new ways to share your photos via mobile device. Do note, however, that this option is only available by first purchasing Disney Genie+. Click here for all the details. 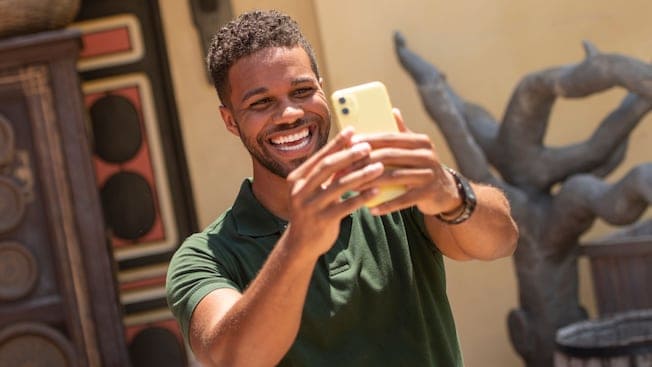 Another excellent extra is being able to use your photos to claim a place within the Cinderella Castle Mural of Memories. How it works is: First, you open up your My Disney Experience app. to see all available mural spaces, then stake your claim. You next will select the Disney PhotoPass photo of your choosing and then take your place in the mural’s montage. Leaving your memory requires a one-time purchase price of $9.99. Visit the link to learn more. 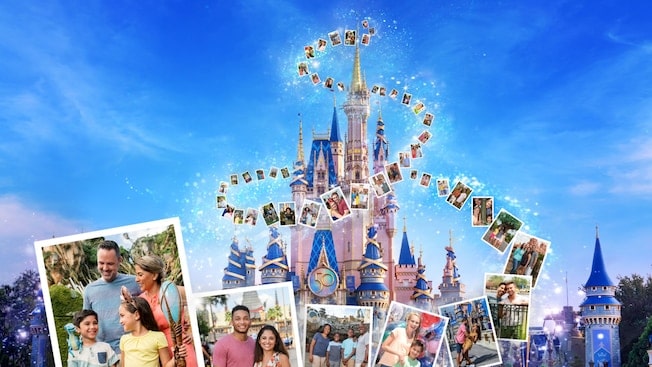 Because the scene at Disney World is forever changing, we advise you to stay up-to-date with all the latest PhotoPass costs and to double-check on all available offerings. One thing that never changes, though, is the fact that you can never go wrong with utilizing Disney PhotoPass services. Professional quality photos with magical elemental touches, why would anybody even consider forgoing such an offer? Furthermore, we cannot emphasize enough that the added purchase of Memory Maker is an absolute steal when you consider all the limitless options you get for just one set price. It more than pays for itself and is entirely worth it! PhotoPass services go above and beyond to help you keep the magic of your Disney-made memories in your heart with cherishing photos to last a lifetime.