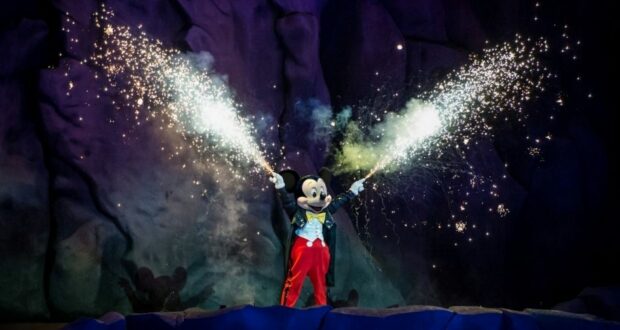 New Photos Show BIG Progress Being Made on the Return of Fantasmic!

2022 has brought a LOT of excitement to Walt Disney World Resort! We’ve recently seen the return of several pre-COVID experiences such as Trams, select Disney Resort restaurants, and even Spa services at Disney’s Grand Floridian Resort. Disney has shared more is to come… and yes, Fantasmic is on the list to return!

We previously shared the hard-to-see news that the popular nighttime show, Fantasmic! at Disney’s Hollywood Studios looked like it was closed for good as the moat around the performance stage was drained. We weren’t sure if the entertainment would return. As Disney’s Hollywood Studios welcomed back Beauty and the Beast – Live on Stage and Indiana Jones Epic Stunt Spectacular, we kept our fingers crossed Fantasmic! would return to the Disney Park as well.

Disney dropped the big news that YES, indeed Fantasmic would be making a return in 2022 but has yet to provide details on the return date. When Fantasmic! returns, keep in mind Disney has already revealed new characters will be added with a new sequence that will include projections and stunts. We expect the introduction of a few new characters but are keeping our fingers crossed that Disney keeps several of the classic characters that make the nighttime show such a success.

But, WHEN will we be able to enjoy the show? We’re seeing BIG progress on the Fantasmic! refurbishment which may mean we’ll be able to see Mickey battle against evil once again SOON!

@bioreconstruct took to the skies to catch this fantastic sight! That’s right, the Fantasmic! moat has been refilled. @bioreconstruct notes, “Aerial look at Fantasmic. Pool recently filled. Seems like the refurbishment is complete.” Check out the water-filled moat below:

@bioreconstruct also shared a photo of the beloved Steamboat Willy which holds many of the characters as it floats by the audience in the Hollywood Hills Amphitheater during the show. The image is noted with, “A near straight down aerial look at Steamboat Willy. This ship was stripped to frame and rebuilt as part of the refurbishment of Fantasmic.” Check out the photo below:

When do you think Fantasmic! will make its big return? While we aren’t sure just yet, it seems like the moat being refilled is a great sign for a quick return.

If you’ve never seen Fantasmic! you’ll want to be sure to visit Disney’s Hollywood Studios as soon as it makes its return! Disney describes the entertainment as “A Legendary Tale: Featuring more than 50 live performers, massive sets, stunning effects, dazzling pyrotechnics and rousing music, this larger-than-life show is painted on a grand canvas of dancing water and light like nothing you’ve ever seen. Overflowing with silly and suspenseful surprises, it will leave your entire family smiling from ear-to-ear!”

“A Night When Dreams Come True: Fast asleep, Mickey Mouse dreams that he is a mighty sorcerer’s apprentice with the power to control water, color and magic. The Disney Villains—including Maleficent in the form of a towering, 40-foot-tall dragon—turn Mickey’s dream into a nightmare, but don’t underestimate the power of Mickey’s imagination! The fantastic fantasy includes Disney Characters from some of your favorite animated classics: Beauty and the Beast, Sleeping Beauty, The Little Mermaid, Aladdin, The Lion King, Pocahontas, Snow White and the Seven Dwarfs“

We’ll be sure to keep you posted as we learn more about Fantasmic’s return, including possible Fantasmic! Dining Packages and/or Disney Genie+/Lightning Lane additions.