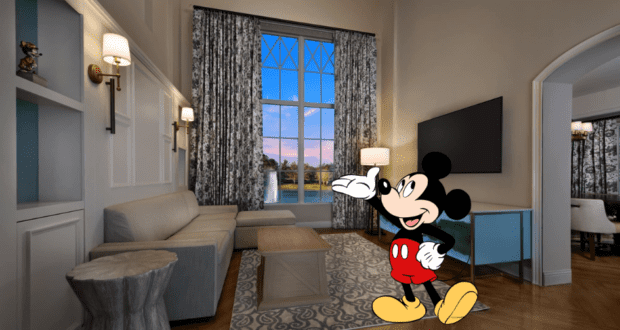 It’s no secret that staying on the grounds of a Walt Disney World Resort is the preferred method for vacationers. Because of Disney’s versatile array of existing Resort designations, along with each one’s unique callouts in theming and vast range of different room options to choose from, the possibilities are pleasingly plentiful, to say the least.

What’s more, staying at any Disney Resort comes with exclusive perks and amenities for all Guests, regardless of whether they opt for a more budget-friendly Value Resort or decide to splurge on a Deluxe Resort offering. These include complimentary transportation to Parks, onsite recreations and activities, the option to make advance dining reservations up to 60 days sooner, being able to purchase Lightning Lanes starting at 7 a.m. that morning, and even being allowed earlier Park admission than non-Disney Guests.

For Disney Deluxe Resort Guests, there is also the option to stay extended evening hours at select Parks on select nights.

As even Disney’s Value Resorts come out on top when ranked against other competing budget-friendly lodgings within the greater Orlando Area, it may just lead you to ponder how much greater the greatest of Disney’s most elite options rank across the board. Well, as not to put on any airs, Mary Poppins would declare that they are no less than “practically perfect in every way.” And there are just so many uniquely upgraded ways to stay among such options at that. Want to know more? We’re sharing with you all the ways to stay in absolute luxury while vacationing at Walt Disney World Resort.

The highest-ranking Resort category at Walt Disney World is the Deluxe Villa Resort designation. While all of Disney’s existing Deluxe Resorts have adjoining Deluxe Villa expansions that are interconnected, there are two Deluxe Villas Resorts that are their own independent stand-alone entities. They are Disney’s Saratoga Springs Resort & Spa and Disney’s Old Key West Resort.

Deluxe Villa Resorts are those established specifically for Disney Vacation Club Members. Do take note, however, that nonmembers may stay within such lodgings as well.

Even among the many kinds of villas to behold on Disney grounds, there is great variation in size, the number of rooms that each dwelling boasts, price range, and how many Guests can be comfortably accommodated accordingly. It’s pretty standard that all villas come with an exceptional array of home-away-from-home amenities, including fully furnished kitchens and/or kitchenettes, in-house washer/dryer setups, and other appliances in addition.

Some Deluxe Villas may feature other stellar features and extras as well (some of which we will tackle in greater detail later), depending on which you are staying in.

In addition to the aforementioned Saratoga Springs and Old Key West Resorts, Disney’s other Deluxe Villa Resorts include:

Deluxe Villas may range from smaller studios that sleep just four or five Guests to multiple bedroom lodgings (in some cases, up to three bedrooms) that can comfortably house up to 12 at a time. Those villas boasting the most spacious room sizes can be found at Old Key West, the Grand Floridian, and the Riviera. 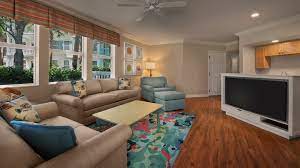 Not Your Usual Treehouse

Would you believe us if we told you that one of the most luxurious dwellings you can stay in on Disney property is none other than a treehouse? To prove the point that not all villas follow the same traditional format, we present to you the Treehouse Villas over at Disney’s Saratoga Springs. 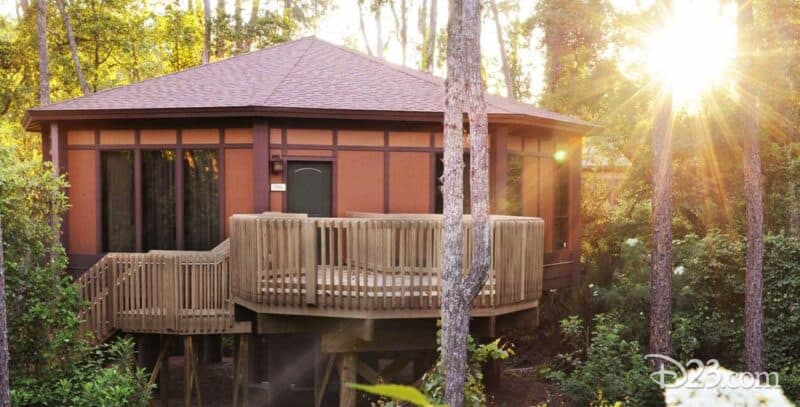 With a grand total of 60 such Treehouse Villas to choose from, these woodland marvels are nothing like that tree fort you may have had as a child. All the same, they literally elevate your stay at Disney with their off-ground positioning, propped up by 10-foot stilts, no less.

While your childhood treehouse may have been just barely big enough to house you and one or two friends, these Treehouses can comfortably sleep up to nine Guests. What’s more, they come with a host of in-house features and amenities that include three bedrooms, two bathrooms, a fully furnished kitchen with all the necessary appliances, and even a private washer/dryer setup. And let’s not forget about all those other home-away-from-home essentials in addition, like access to the Internet, television, and more.

Each villa includes a separate living room area in addition to the three bedrooms and dining area. The master bedroom and second bedroom generally include queen beds, with bunk beds found in the third room. There is also an additional queen-size sleeper sofa and twin-size sleeper chair. 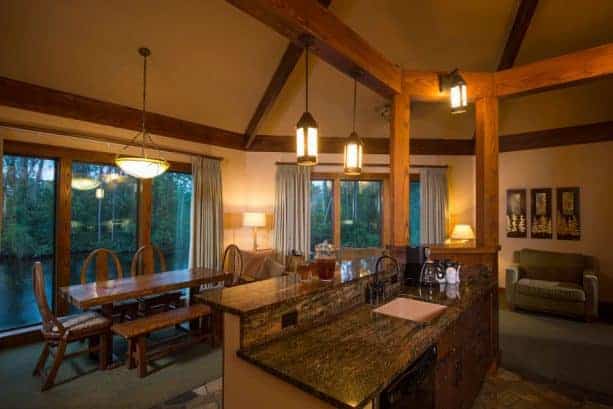 Related: The Best Places to Stay at Disney If You Have a Large Number of People in Your Group

If staying in a stilted treehouse in the woods isn’t your thing, you may want to consider a waterfront cabin overlooking Bay Lake instead. But to call the 26 dwellings at Disney’s Wilderness Lodge (that make up the Copper Creek Cascade Cabins) mere “cabins” is a vast understatement.

If the elaborate wraparound screened-in porches don’t give away their remarkable standing as luxury accommodations, perhaps the built-in hot tub that each unit boasts will be a testament. 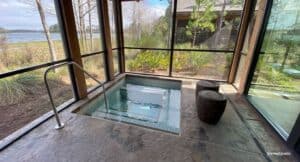 These cabins can comfortably accommodate up to eight Guests, with two bedrooms, two full baths, and a fully furnished kitchen to their credit. They also boast private washer/dryers in-house as well as a double-sided stone hearth fireplace. The latter really drives home the idea of a faraway retreat, despite still being conveniently located in the heart of Disney Magic.

Furthermore, these cabins are all updated with all the best home-away-from-home features and amenities, including Internet access, television, and more. 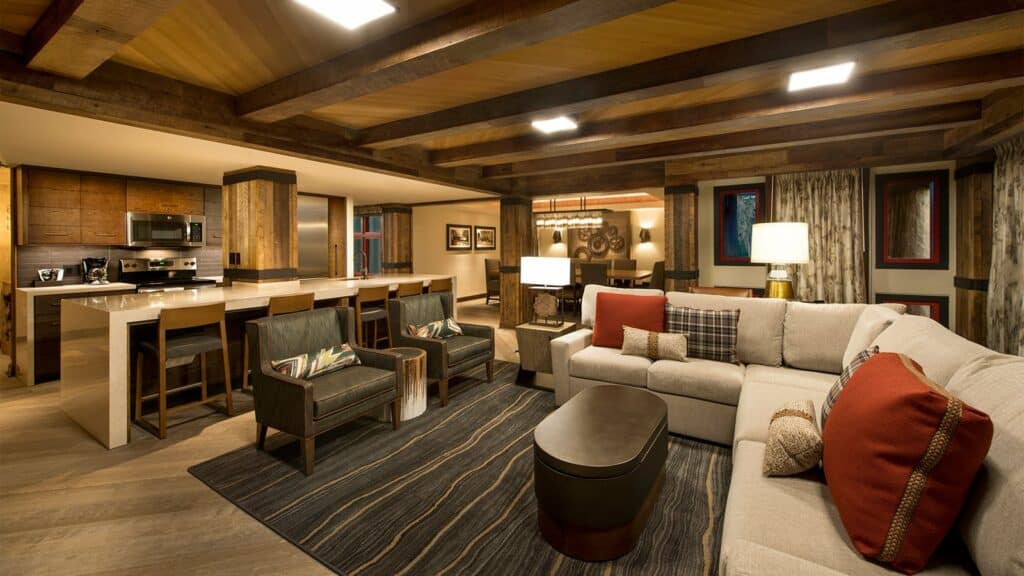 As far as sleeping arrangements go, you will find both king and queen-size beds, a queen sleeper sofa, a single sleeper pull-down bed, and a twin sleeper chair. It’ll be sweet dreams of the great outdoors for you, since these cabins are comfortably up to par when it comes to elegant standards and accommodations. 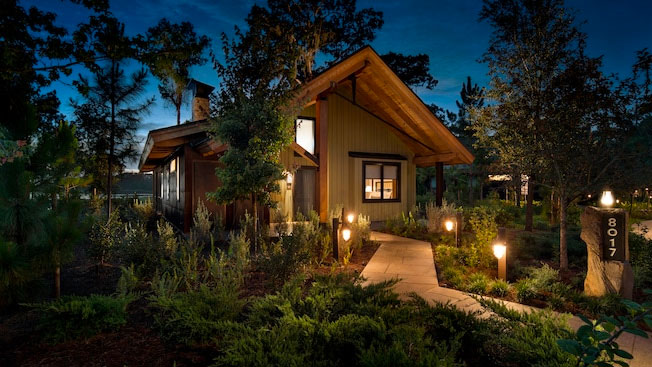 Another way to live it up in luxury during your Disney World vacation is by opting for the island life. And you can do just that over at Disney’s Polynesian Village Resort when you book one of the 20 free-standing Bora Bora Bungalows. Literally built right along the waters of the Seven Seas Lagoon, these Polynesian pleasures really accentuate the fully immersive magical experience that comes with staying right within the Magic Kingdom Resort Area. 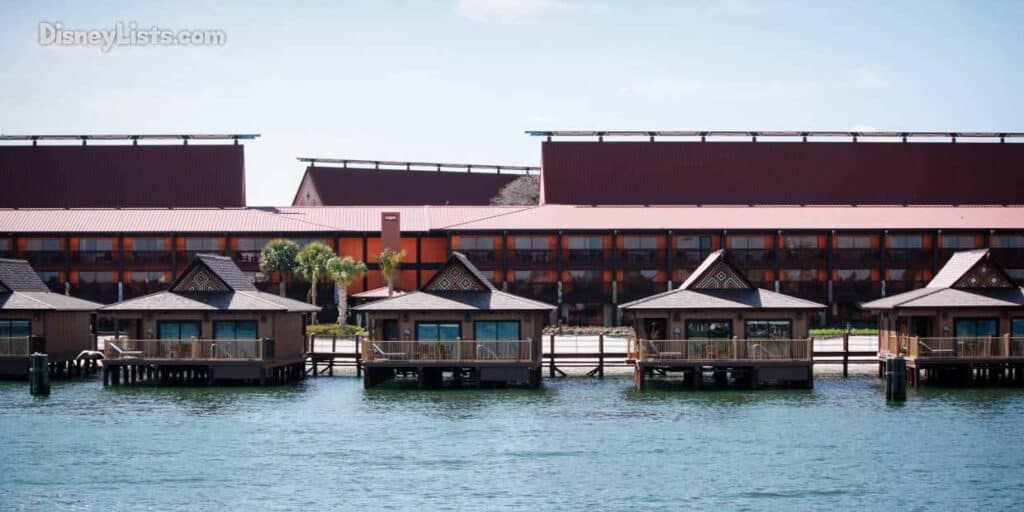 Up to eight Guests can enjoy the maximum comforts that come with staying here, via a two-bedroom setup that also includes two full bathrooms, a fully furnished kitchen with all the essential appliances, and a washer/dryer setup, of course. These dwellings also come with all those other amenities that you’ve come to expect, like television and Internet access — but they also include other advantageous callouts you wouldn’t expect.

For instance, did you know that every bungalow actually comes with its very own private deck and plunge pool? It makes for the perfect low-key dip, soaking up an experience that is custom-catered to you and you alone. What’s more, these decks offer up perfect views of both the nightly fireworks over Cinderella Castle as well as the passing Electrical Water Pageant. And with the inclusion of installed speakers, you don’t miss a single moment of the magic you’re viewing from afar. 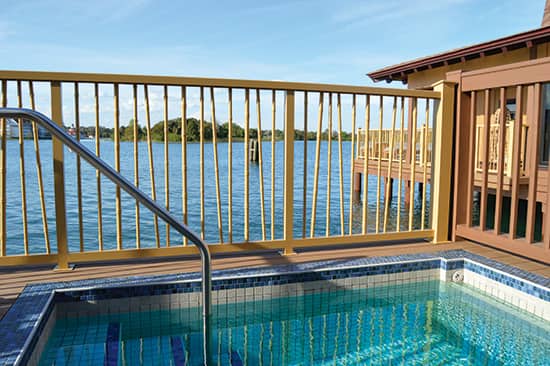 Among the two bedrooms and separate living space comprising the Bora Bora Bungalows, you will enjoy one king and queen-size bed, an additional queen sleeper sofa, and two single pull-down beds. What a way to relax while soaking up the island life in the best possible way. 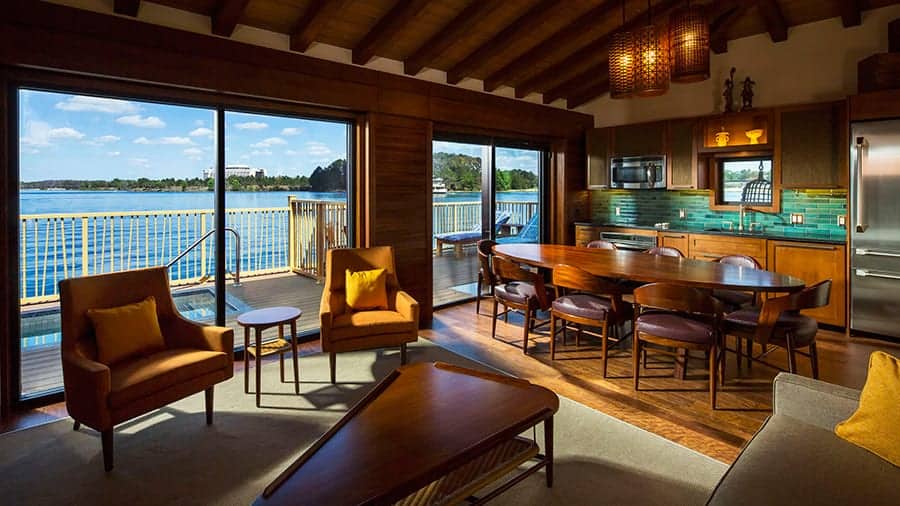 If you need the extra space but aren’t necessarily going for an unattached private dwelling per se, then perhaps your best bet is to stay in the connecting Resort but in a “suite” way. Many Disney Resorts offer up roomier, more comfortable family suites, including two Value Resorts: Disney’s All-Star Music and Disney’s Art of Animation Resort.

However, as you will come to find out, not all suites are comparable, as some truly accelerate luxury even further in what they have to offer. Here are the most optimal suites in all of Walt Disney World and which Resorts to find them at: 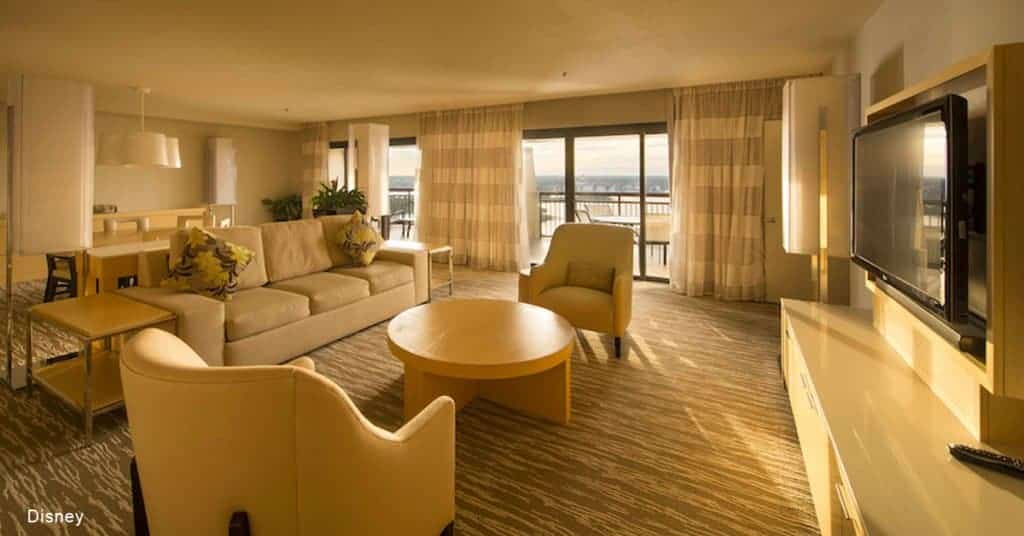 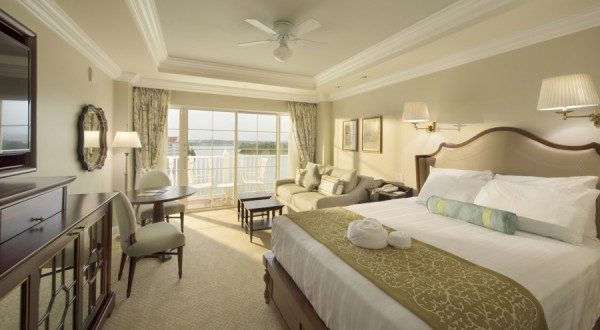 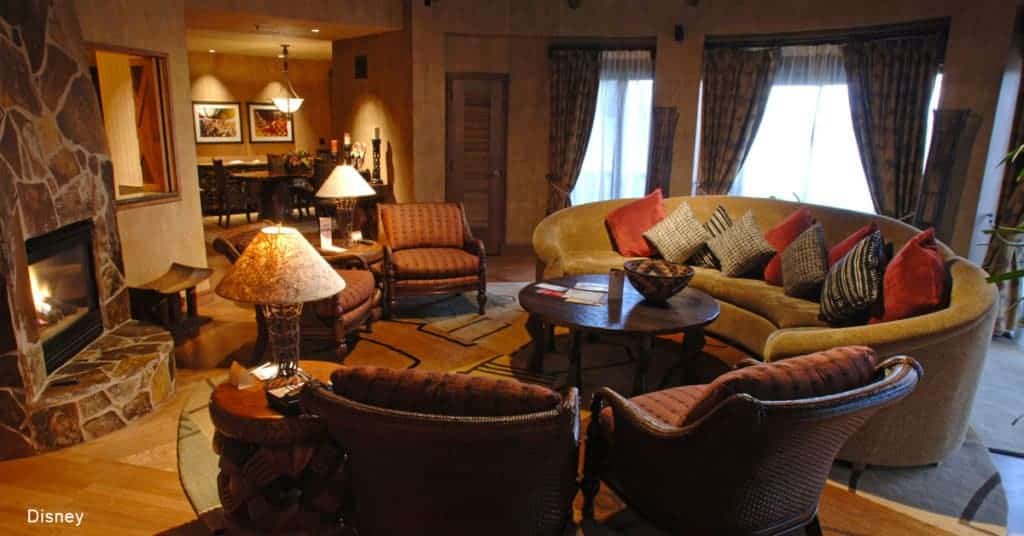 Related: Video: This Disney Resort Boasts ‘The Wildest Suite in the Wilderness!’

Because of its most elevated, esoteric appeal out of all Disney suites (not to mention its high demand and the strong unlikelihood that you will ever get to stay here personally) we’re ranking one suite in particular with its very own standout category — and that suite is none other than the famed and fabled Cinderella Castle Suite.

That’s right; there’s actually a suite nestled discreetly right within the walls of the most iconic landmark of all Magic Kingdom Park landmarks! 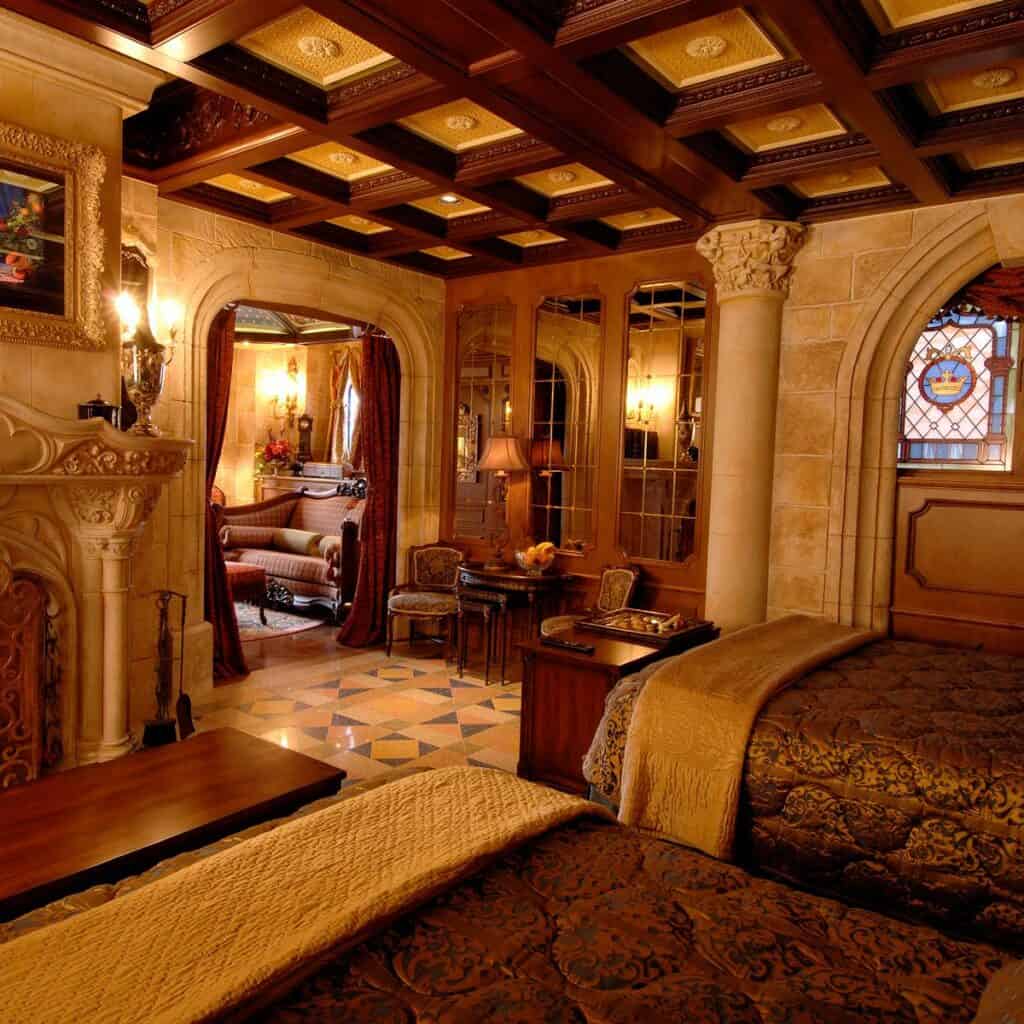 This suite was originally intended to serve as a private apartment space for Walt Disney and his family — but due to Walt’s untimely passing prior to Disney World’s opening, the space served many alternate purposes throughout the years, including storage, telephone operations, and other behind-the-scenes functions.

Later on, though, Imagineers redesigned it into a private, special promotional Cinderella-themed suite, to be used only for the most exclusively significant of purposes. 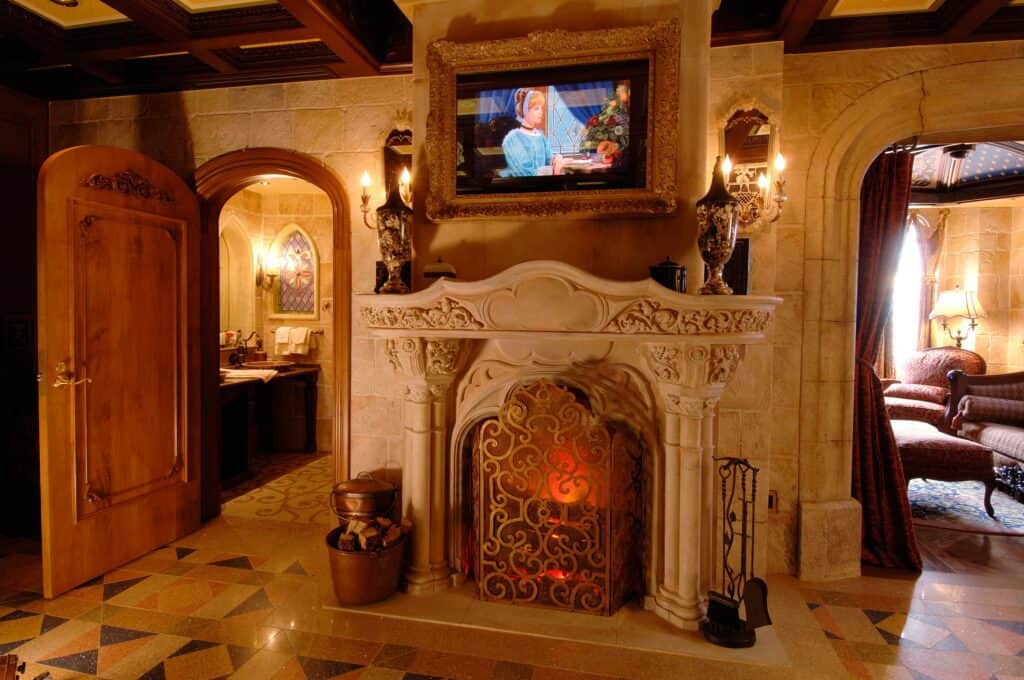 As previously mentioned, the suite follows the Cinderella motif and is fashioned so authentically that even the television serves a dual purpose as a magic mirror. Throughout the suite, you will find accented gold touches along with personal relics belonging to the namesake princess herself. Another dazzling feature is the perpetually starry night sky ceiling in the bathroom.

There’s just so much to cover in the way of awe-inspiring appeal that we can’t do it justice by words alone! 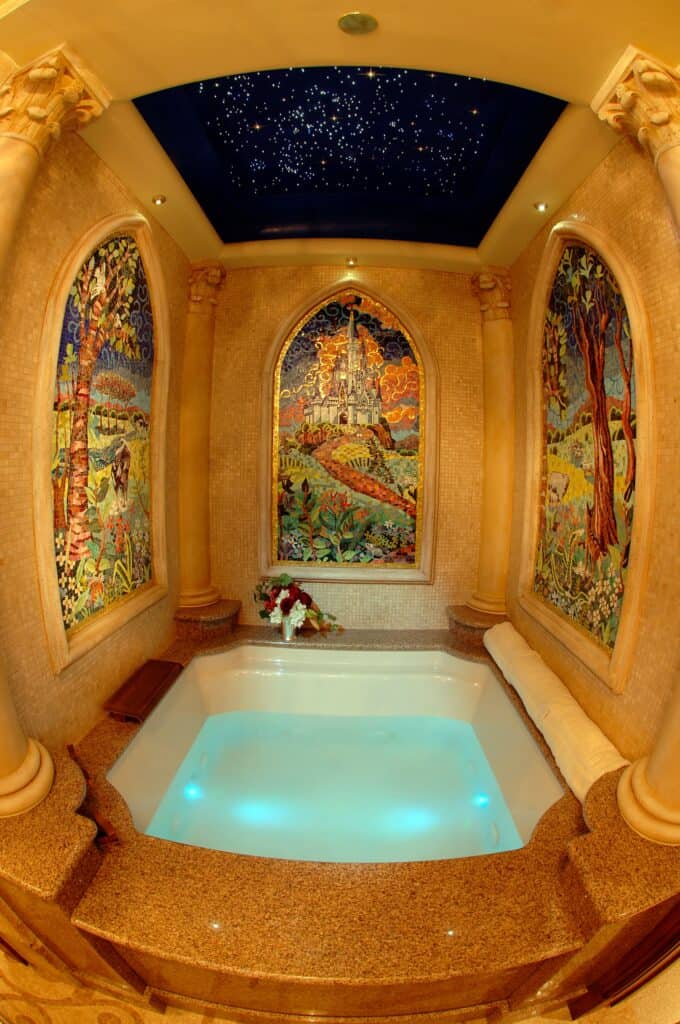 As we previously stated, with the exception of occasional contests and other unique instances, your chance of being an overnight Guest at the Cinderella Suite is pretty slim, even if money is no object. All the same, we feel it’s worth noting that up to six can comfortably be accommodated here, in the event that this “wish your heart is making” ever does somehow come to fruition. Never stop dreaming, even if it seems impossible!

We’ve covered many luxurious ways to stay at Walt Disney World. But remember that any accommodation can deliver just the right kind of magic for you and your party, whatever it is you are looking for. Whether or not you decide to optimize your stay by going all out or not is up to you, but any option on Disney property is sure to make you feel like royalty.