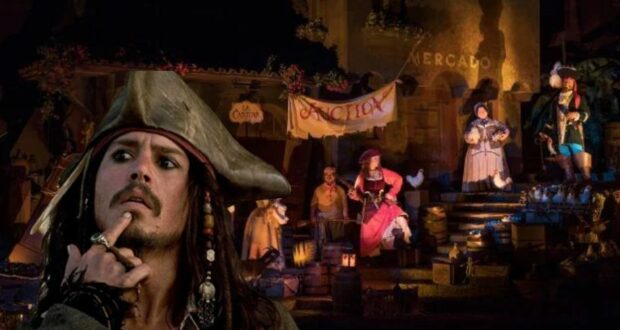 ‘We Wants the Redhead’? Johnny Depp Spotted With Red-Haired Woman

Disney’s Pirates of the Caribbean Captain Jack Sparrow star, Johnny Depp, has been at the center of media coverage as we all watched the Depp vs. Amber Heard trial unfold. Now, the star is spotted with a red-haired woman, sparking questions.

Remember the days of “we wants the redhead” being the iconic line spoken while riding along on Disney’s boat ride, Pirates of the Caribbean? Disney dropped the bride auction scene and debuted a new scene in 2018. Now, the animatronic redhead is still present but in a new role of “Redd,” as she leads the auction of household items.

We can’t help but let our Disney fandom sink in when we hear Johnny Depp is now regularly spotted with a red-haired mystery woman as he travels with performing musician Jeff Beck.

PEOPLE reported on July 18, 2022, “The 59-year-old actor was photographed Sunday in Italy getting out of a van with a woman as he continues touring overseas after releasing an album Friday. Depp was spotted helping the woman with her bag as they exited the vehicle and he headed to rehearsals.”

Not only has the Depp and red haired mystery woman sighting been captured this time, but the woman has been spotted with Depp many times in recent weeks. The appearance of Depp with this mystery lady comes as his ex-wife Amber Heard pushed for a mistrial which the judge ultimately denied.

What’s to come with Disney and Depp’s future developments?

Disney has reportedly asked Depp to return as Jack Sparrow, but Johnny Depp has declined the position. Disney has also recently come under fire as Disney fans are angry they jumped to conclusions and dropped Johnny Depp from previous engagements.

Meanwhile, Captain Jack Sparrow still greets Guests at Magic Kingdom Park in the Adventureland portion of the Park, near the beloved Pirates of the Caribbean attraction. And, yes, Pirate Redd and Captain Jack Sparrow are still the stars of the attraction… as similarly, this mysterious red haired woman and Johnny Depp are in the news.