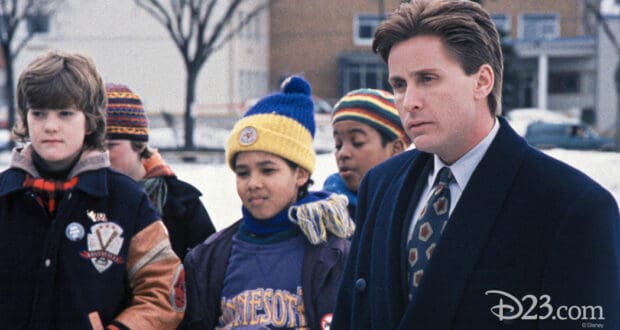 Whether you are more of an active cold-weather sports participant yourself or one who finds cozy comfort in watching such pursuits from the audience or on your television at home, everyone could do with a warming dose of Disney’s take on such endeavors.

In fact, Walt Disney Entertainment has produced several inspiring movies in the spirit of cold weather sportsmanship over the years, all of which are uplifting and heartwarming, despite their frosty countenance. Here are our top 10 team player picks for you to consider cozying up with this winter.

Our first recommendation is a throwback to classic live-action Walt Disney Productions. Released in 1972, this family-fun comedy starring Dean Jones and Nancy Olson tells the story of a strait-laced businessman who comes into inheritance of an old hotel. In recognizing the dilapidated property’s lucrative potential he sets to work in revamping it into a ski resort, with plenty of misadventures along the way.

If you like ice skating and teen drama doled out in a family-friendly Disney sort of way, then this live-action pick from 2005 is just what you need. The film centers around Harvard-bound high school student, Casey Carlyle, as she comes to question the life’s goal she’s set for herself and whether to pursue her planned pathway into academic endeavors or fuel an ignited passion to become a professional figure skater instead.

Here’s another ice skating hit from 2005, this one being a Disney Channel Original Movie focusing on the great lengths that one teenager would go to in order to fulfill her wildest dreams. When Katelin Kingsford, who has always dreamed of one day becoming a champion ice skater, discovers that a renowned Russian instructor is working at a nearby private school, nothing can stop her from seeking the opportunity to train under such guidance—even if it means accepting an ice hockey scholarship as her only means in.

Things really heat up and then get cooler in this throwback from 1993. Inspired somewhat by real-life events, this film tells the story of Jamaica’s first national bobsled team and their premier performance in the 1988 Winter Olympics. It’s a family-friendly, motivational feel-good kind of flick you just can’t pass up on a cold, cooped-up day.

This Disney Channel Original from 2014 focuses on two avid snowboarders—one a boy, the other girl, who both face very different yet similar challenges. After being cut from her snowboarding team, teen Kayla begins training with former snowboarding champion, Will, who has since fallen out of favor following what has come to be known as a career-ending epic fail. By working together to beat the odds that are against both of them, they succeed at helping out one another in ways neither could have predicted.

Related: Dove Cameron Reflects on Her Time as a Disney Channel Star

Disney’s direct-to-video Air Buddies franchise—a follow-up to the earlier theatrical Air Bud franchise—has produced several heartwarming films featuring our five favorite retriever pups, always involved in another actively, so it would seem. And the Snow Buddies movie is no exception, as it centers around the misadventures that befall the canine cuties after accidentally chasing an ice cream truck to a plane, which in turn, flies them to Alaska by mistake. Once there, they make friends with a fellow pup friend and a boy in need of recruiting five dogs for a sled race.

This live-action blockbuster from 2002 combines elements of Snowball Express and Snow Buddies into a fun watch with family and furry friends alike. The story follows a somewhat uptight dentist, Ted Brooks, who is living in Miami upon discovering that he has come into an “inheritance” from his birth mother, awaiting him in the faraway state of Alaska. But when he arrives on the scene, he is surprised to learn that the inheritance in question is that of a pack of rowdy sled dogs and some property. After coming to terms with the reality of the situation, Brooks decides to embrace his canine endowment and even race them in the local “Arctic Challenge.”

For this next live-action feature, released by Walt Disney Pictures in 2019, we keep with the sled dog racing theme while taking a detour from the sports-exclusive angle. The film follows true events that unfolded during the winter of 1925 in Nome, Alaska in which renowned champion dogsled trainer Leonhard Seppala and his team—led by his first-in-command sled dog, Togo, set out on a harrowing journey through treacherous conditions and terrain, on a noble quest to transport medicine to a desperate town in need.

For a motivating, feel-good movie about beating the odds in a way that can only be deemed miraculous, we recommend this blockbuster hit from 2004. Inspired by true, uplifting events, Miracle recounts the amazing story of how hockey player-turned coach, Herb Brooks, led an underdog squad to Olympic victory against the seemingly unbeatable Soviet Union team back in 1980.

This well-known film franchise, along with its spinoff Disney+ series Mighty Ducks: Game Changers, is among Disney’s most popular picks for feeding an ice hockey viewing frenzy. But even those who are not fans of ice hockey, per se, admit to being absolutely hooked. The whole Mighty Ducks story builds on the very first installment, which debuted back in 1992 and follows the story of a corrupt lawyer, Gordon Bombay, who finds himself leading a kids’ hockey team as a result of having to fulfill a community service commitment.

Through personal struggles relating back to his own troubling memories of hockey as a youth to the many other trials that emerge as the story arc progresses, all three Mighty Ducks films and the series work well in keeping a timeless charm and interest to span across generations of viewers.

There are many ways to stay warm while enjoying frozen follies as depicted through an excellent array of Disney films. And Disney sports movies in particular always succeed at getting your adrenaline going and your blood pumping in a motivating, feel-good sort of way. But that’s what the magic is all about—inspiring and uplifting fans in ways that keep on creating new dreams.