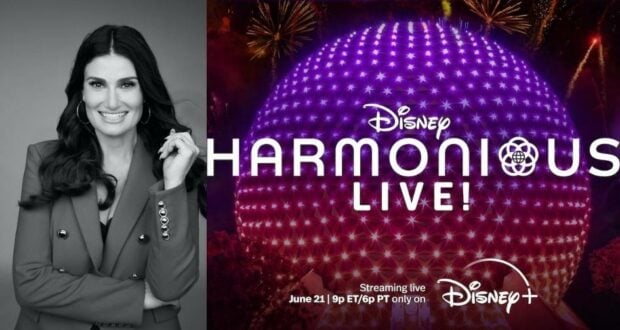 The announcement was shared this week by Disney Parks Blog which said,

On Tuesday, June 21, at 6 p.m. PT / 9 p.m. ET, Disney+ will stream “Harmonious Live!”, a special livestream performance of the EPCOT nighttime spectacular “Harmonious” from Walt Disney World on the Disney+ streaming platform in the U.S. and Canada to celebrate World Music Day.

The live event will be hosted by Tony Award-winning performer, actress, singer-songwriter, and philanthropist Idina Menzel (“Frozen,” “Frozen 2”) with special guest Auli’i Cravalho (“Moana”) and will celebrate the transcendent power of music with a medley of classic Disney music reinterpreted by a culturally diverse group of 240 artists from all around the world. Created especially for Walt Disney World’s 50th Anniversary Celebration, Harmonious succeeds the beloved EPCOT spectacle IllumiNations (after a short run by the filler show, EPCOT Forever), and uses new projections and waterworks to deliver a story that takes viewers around the world while incorporating Disney movies.

This special live stream will only be available to Disney+ subscribers in the United States and Canada, and a replay of the event will be left on the streaming service to watch anytime.

Here is a teaser trailer for what viewers can expect to see!

Disney describes HarmonioUS on its website as the following:

The heart of the Epcot transformation comes to life with Harmonious, one of the largest nighttime spectaculars ever created for Disney Parks. The show is a beautifully crafted medley of classic Disney music and visuals reinterpreted by a culturally diverse group of 240 artists from all around the world. Come and be dazzled by all of it as you discover how Disney music and stories have the power to inspire and unite us all, overcoming any language or border.

This magnificent new show brings to World Showcase Lagoon an innovative combination of floating giant screens, choreographed moving fountains, lights, pyrotechnics and lasers in a 360-degree view. Enter amazing worlds inspired by Moana, Aladdin, Coco, Brave, The Lion King, Mulan, The Princess and the Frog and other classic stories. Colorful images and effects dance and change as Harmonious weaves familiar Disney music and stories together in brand-new ways. Through unique perspectives as diverse as the world itself, Disney songs hop from language to language as the show brings people from different parts of the world together to unlock the magic of possibility.