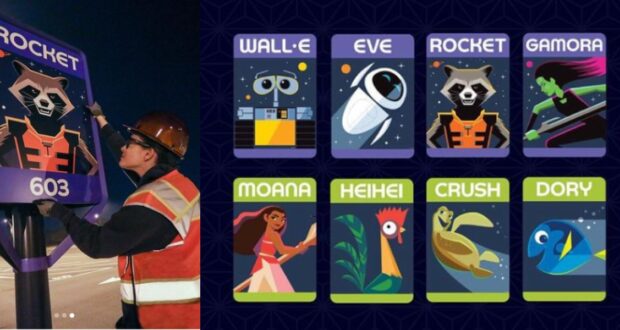 Progress continues at the Experimental Prototype Community Of Tomorrow, and while construction continues on Moana – Journey of Water and other projects in what was formerly known as “Future World,” changes are also happening outside of the Park gates, including the parking lot.

Disney Parks shared that Disney World’s largest parking lot will be rethemed, with each parking zone being given a Disney Animation, Pixar, or Marvel Character who is represented in the Park.

Beginning this week, guests will be welcomed to EPCOT in a brand new way. As part of the continued transformation of EPCOT, we have made updates to the guest parking lot to introduce new lot names with familiar faces and refreshed paint. In addition to the new “Space” and “Earth” sides of the lot, a redesigned auto plaza marquee will be installed in the coming weeks to welcome our guests to the park! Follow along as we continue to share more information about what is to come at EPCOT this year. The parking signs are already up and being seen by Disney Park Guests. Theme Park Insider shared a first look at the new signs on Twitter this morning.

New signs have debuted in the EPCOT parking lot. pic.twitter.com/Mah0CII2l8 This is not only the latest change to be completed in EPCOT’s massive revamp, but it is just the latest installment of Disney Characters into what was originally a character-less Theme Park. The Living Seas was transformed into The Seas with Nemo and Friends. Moana and her Pacific Island friends are getting their own section of the Park. Remy from Pixar’s Ratatouille and Disney’s Beauty and the Beast have taken over the France Pavilion, Princess Anna and Queen Elsa have rethemed the Norway Pavillion’s Malestrom attraction into Frozen Ever After, and Marvel’s Guardians of the Galaxy have replaced a Park-original attraction, Ellen’s Energy Adventure was.

The continued inclusion of Disney IP in EPCOT has continued to be a topic of debate among Disney fans, and only time will tell just how much Disney character influence EPCOT will be under once all of the construction walls come down. But is it really a bad thing?

EPCOT’s International Festival of the Arts is going on right now around World Showcase Lagoon.