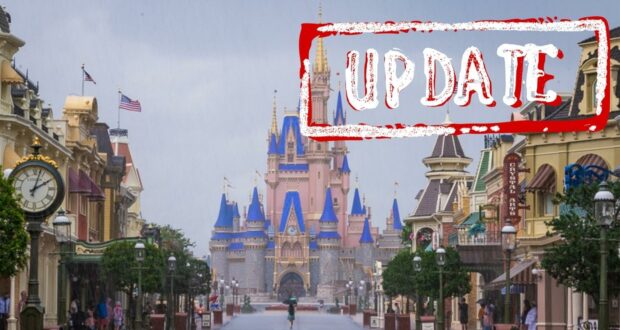 After Hurricane Ian came down on Florida yesterday, Disney Parks has taken to Twitter to provide fans and well-wishers with an update.

Earlier today, we reported that as Walt Disney World Resort and the rest of Central Florida assess the damage from Hurricane Ian’s evening pass, it appears that an extended Theme Park closure could happen. Now, the Disney Parks Twitter account has posted an official update from their end regarding the situation at the Disney Park.

On September 29, at 10:28 a.m. EST, the Disney Parks official Twitter account took to the platform to share their current views on how they are approaching the next few days.

As seen in the photo, the update from Disney’s end is timed at 10:15 a.m. EST. They confirmed that the Theme Parks “and other operating areas remain closed today while crews assess the impact of the storm and clear debris.”

The post also specifically highlighted the Cast Members of Disney World who have been hailed on multiple counts as the people who are keeping the Resort running and spirits high.

Read More: CMs are the MVPs during Hurricane Ian per Disney Guests

Important to note is that they did not provide any official word so far on Friday operations.

Meanwhile, fans were sharing their opinions on how Disney should handle the situation going forward. @SprszOrl shared:

They should stay closed until Monday

Meanwhile, other Guests who had planned Disney vacations starting this weekend were also using the thread to try and find more information about whether they would be able to make their trips.

Twitter user Nate Adams, @TheOnlyCritic, commented, “I’m currently slated to fly in Saturday evening (around 5pm) and staying at Disney through the week. If you had to guess, do you think park operations will resume by then? Just trying to gauge as I know they’re many underlying factors.”

At the time of reporting this story, Disney’s Wilderness Lodge, and Disney’s Fort Wilderness Resort & Campgrounds, among other Resort hotels have all been closed for booking for the period of the storm and are hunkering down while it rages on.

We are still monitoring this story and will continue to provide updates on this all Hurricane Ian and Walt Disney World news as it develops.