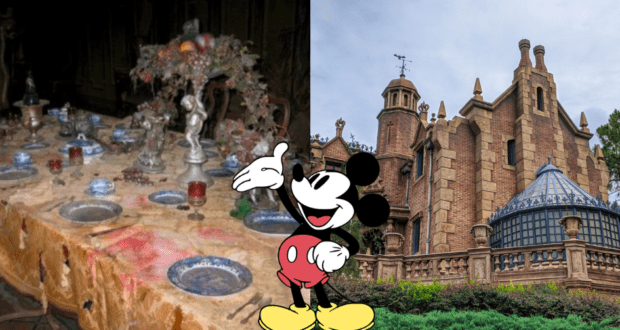 Disney excels in telling a great story. You’ve seen it time, and again through the many movies the Walt Disney Company has produced over the years, as well as within Disney Park locations the world over. And on that latter note, we’ve all been treated to our fair share of great stories via Park rides and other experiences. From novelty attractions with well-plotted backstories to intricately themed restaurants and other establishments that keep with a most creative motif, Disney certainly knows how to capture interests and captivate the attention of all folks at any age.

Many agree that Disney dining sits pretty high on the list of hallmark experiences to have while taking a Disney vacation. You have so many diverse options, including quick service as well as full table service establishments, that all offer unique features you can’t help smiling about. Some venues even boast character dining—the ultimate way to demonstrate a more overt theme. Then there are other locations that apply a more subtle, underlying plot etched into the details and décor. Sometimes there are even unique house specialties that keep with an eatery’s established theme. Other times they present creatively named menu items that may not necessarily be original but still inspire the story that’s being conveyed just the same.

As someone who is pretty well-versed in navigating the Walt Disney World food scene in particular, I’ve seen so many wonderful themed experiences come and go over the years. But I have to admit that there is one restaurant concept I’ve always been eagerly waiting on from Disney but have yet to see come to fruition. What I’m referring to is an idea to bring about a thrilling, full-service sit-down establishment themed after Disney’s own iconic Haunted Mansion attraction. From the frighteningly fun décor to the featured food presentations, there are just so many possibilities for carrying out such a feat, and I am absolutely in my element, just brimming with ideas on what could be. 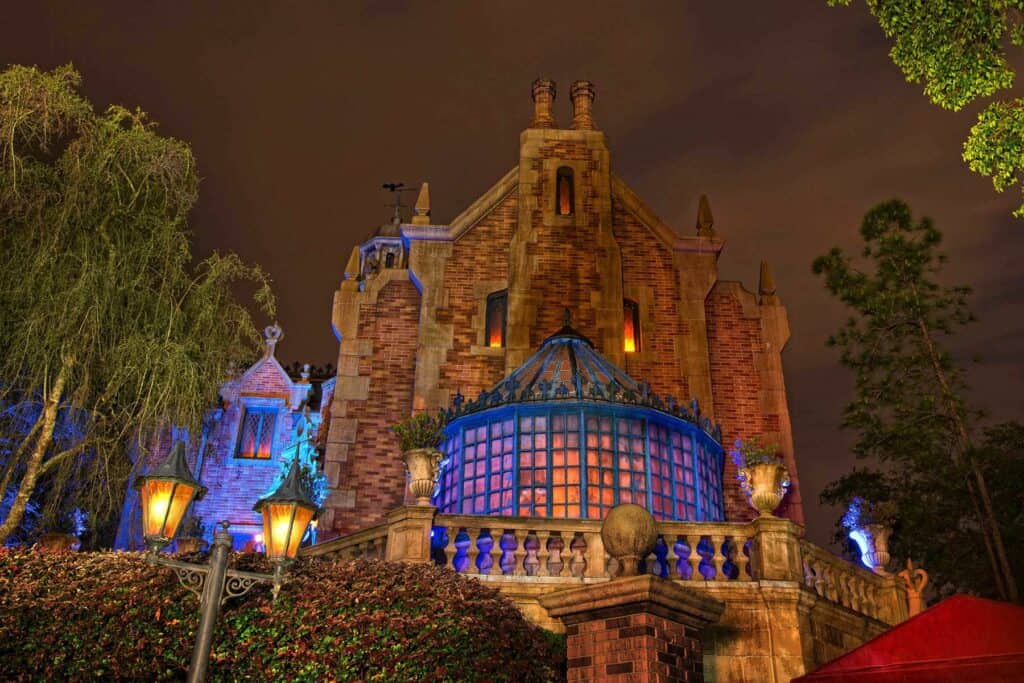 Some Food For Thought

As someone who loves planning themed meals and has a particular knack for coming up with original Halloween freight “feast” creations, I can see plenty of potential for some of the prospective eerie eats that could be featured at a Haunted Mansion-inspired establishment. I’m talking about full-fledged plated entrées rather than those occasions, temporary themed specialty cupcakes, and other goodies that Magic Kingdom Park has been known to release on a seasonal basis or as part of a celebration. But even those former goodies could all serve as precursors for full menu accompaniments. Dry ice elements can make spirited drinks even more spirited, with a chilling ectoplasmic effect. Even drinks that don’t contain alcohol can fit with the frightfully fun theming, like spider cider (apple cider with spun-sugar webbing), or some other creative collaboration that fans of all ages would enjoy. 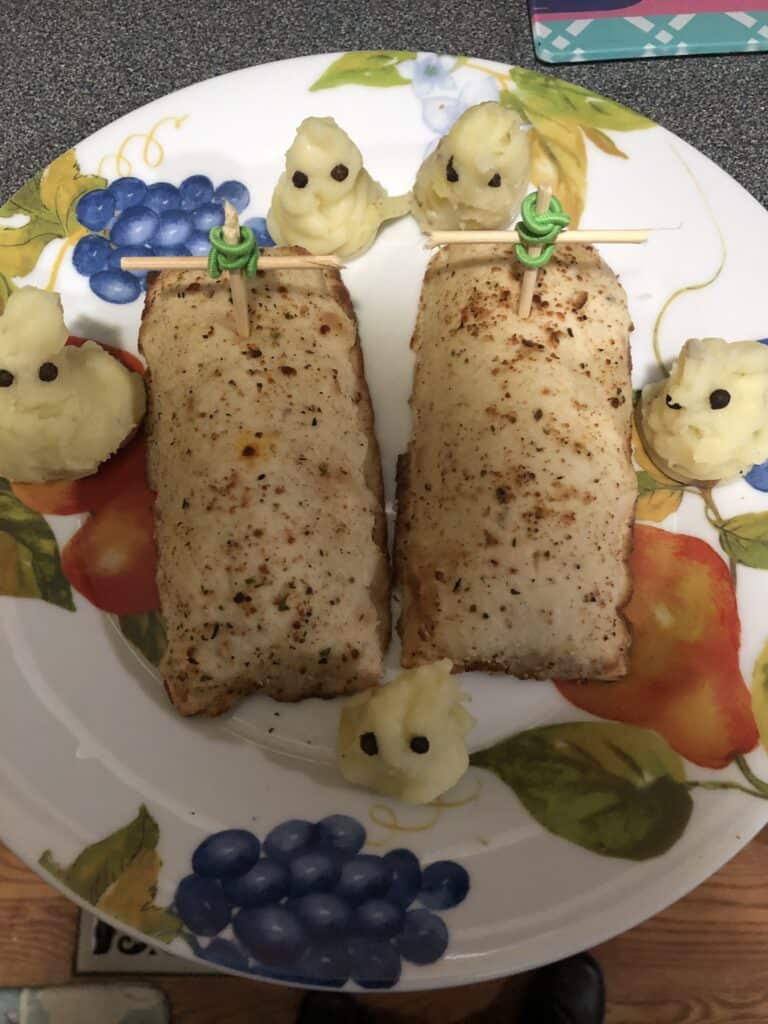 There are several generalized food creations to be considered, such as potatoes shaped like ghosts, spa”dead”y and meatballs, ghoulish goulash, and others. But knowing Disney, if they went the route of a Haunted Mansion-inspired eatery, the incorporation of menu offerings would probably be on a far more personalized level to directly reflect actual characters or references presented in the attraction. I could easily see Master Gracey’s Gravy being utilized in some fashion, a “Wedding Cake to Die For” as a popular dessert—similar to one previously featured at Disneyland’s French Market. And if they decided to include “bootastic” breakfast hours, why not include a nice “Ghost Host Toast” specialty? 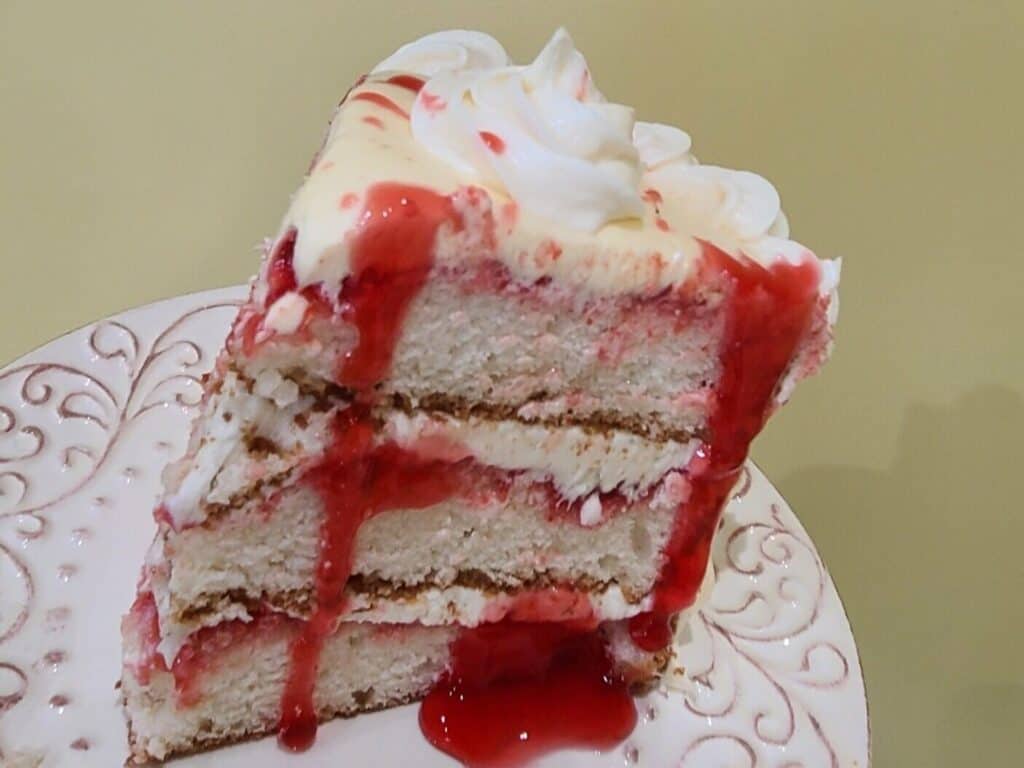 Related: Where to Snag the Best Brunches at Disney World

They could have a lot of fun with the waitstaff working at such an establishment. In following suit in the way that the Jungle Navigation Co. LTD Skipper over in Adventureland does, the prospective Haunted Mansion Restaurant staff could be off duty. In this case, they would be“former” tenants who have since “retired” from their duties but are back to serve the foolish mortals making their way in. It would be pretty amusing to see their ghoulishly creepy interactions with diners, especially if they play out their acting roles with the same character charisma as those at such establishments as 50’s Prime Time Café at Hollywood Studios or Whispering Canyon onsite at Disney’s Wilderness Lodge. Related: VIDEO: Guest Lies About Birthday So Cast Member Does the Unthinkable

Disney has proven time and again that they are capable of producing in-house special effects right before the eyes of Guests. This has been demonstrated throughout various theme park locations as well as those at Disney Resorts, like Trader Sam’s Grog Grotto over at Disney’s Polynesian Village Resort. But if you want an example that’s a little closer to home, right in the heart of macabre Haunted Mansion sentiments no less, just consider that sinister shop setup right in Liberty Square known as Memento Mori and all those extra eerie elements at play within.

Could you imagine haunted mirrors or maybe even a wall that reflects the Hitchhiking Ghosts dining at the table with you? How about a closed-off ballroom you can view from the dining room featuring dancing specters and dueling ghosts? 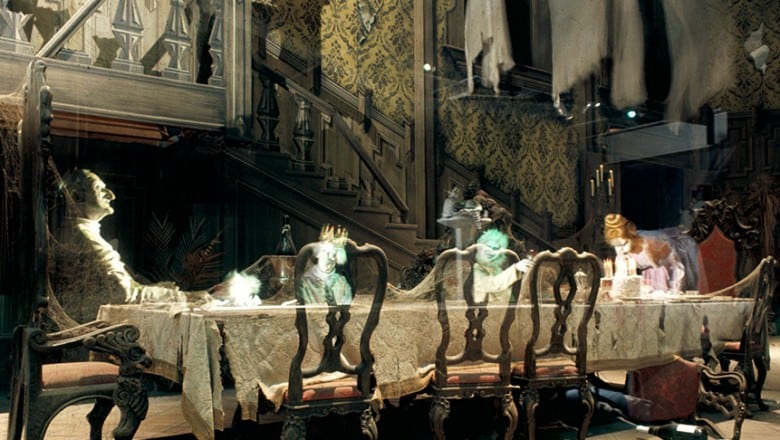 Related: How Disney Park Guests Can See a “Real” Ghost at the Haunted Mansion

As for the interior décor, there are just so many creatively chilling ideas to roll out. How about drawing inspiration from Sci-Fi Dine-In Theater Restaurant’s vehicle seating and incorporating something similar with Doom Buggies, for instance? That would be quite the creepy touch, indeed! 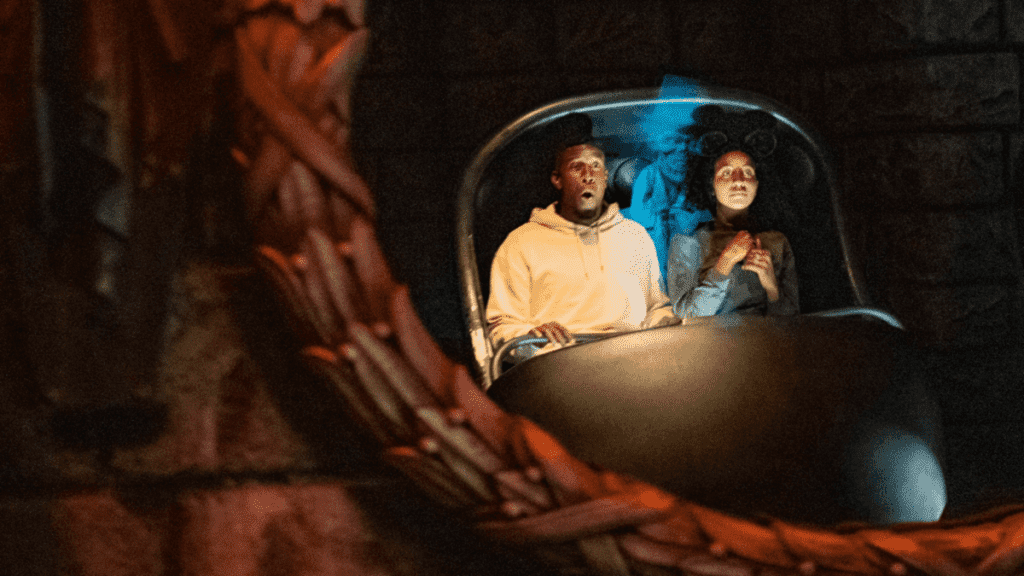 If adding a Haunted Mansion-inspired eatery did get added to the list of tentative future plans for Walt Disney World Resort, there’s just one other gleaming matter that cannot be overlooked. Where would it be located exactly? Presumably, it would have to be in close proximity to the actual attraction over at Liberty Square. But where? Liberty Square isn’t exactly one of the Magic Kingdom’s most spacious areas, after all. One option would be to repurpose an existing venue, but again there are limited options to work with. To even consider re-theming Columbia Harbour House or Liberty Tree Tavern, for instance, would be unthinkable on every level!

Sleepy Hollow Refreshments currently serves as the closest thing we have to a Haunted Mansion-like food option. But even so, none of the regular menu fixtures really embrace the whole Haunted Mansion attraction motif per se. Besides, it’s a rather small, quick-service setup at that. But could Disney find a way to give this snack spot a thorough transformation, remodeling it into a whole new establishment? While spacing considerations for doing so may be questionable, perhaps some construction can be done to utilize currently inaccessible areas into new walkways as a viable workaround. Still, it may end up proving to be more trouble than it’s worth. There’s also an option to remove the current Liberty Square Market and construct an eatery at this spot. Again, this calls into question how much space would be needed to carry out an effective rebuilding from the ground up.

Lastly, what may seem to be a bit of a stretch and can also be a hotly debated topic is the consideration of transforming the existing Memento Mori shop into a Haunted Mansion-themed restaurant. But again, there are just too many diehard fans of this specialty store. But is there a way to expand the edifice to include both operations in one? Perhaps it could work, especially if this remodel brought about an upstairs component. 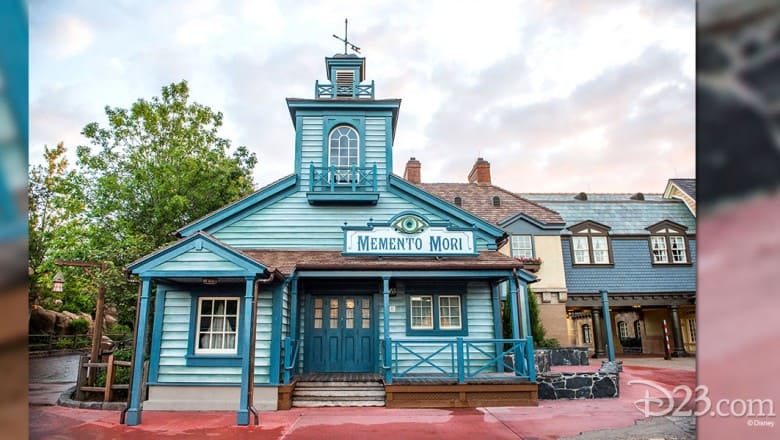 Building Off the Beaten Path

Perhaps the best consideration for establishing a brand-new Haunted Mansion-themed restaurant would be building from scratch in a location that’s not currently being utilized. And there actually is such an area right behind the attraction itself, no less. While this calls into question whether or not it would be too out-of-the-way for some folks to make the trek, it would make perfect sense to have the restaurant somewhere around this point. And the seclusion would work well with a motif for it being a sort of rundown, abandoned, off-the-beaten-path venue. 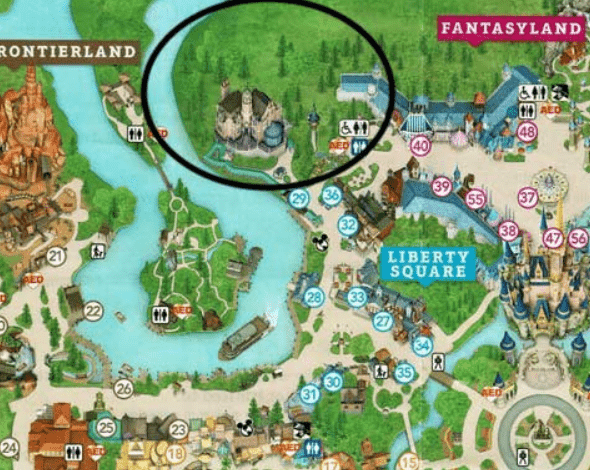 At the most recent D23 EXPO, the idea for expanding the bounds of Disney’s Magic Kingdom Park beyond Frontierland was teased but never confirmed as a set-in-stone game plan. If they do decide to break ground with such expansions, it’s been announced that one of the intended new sections would be a Disney Villains-themed land. While the current concept maps show this expansion gearing in the opposite direction from Liberty Square, I would personally love to see a way to somehow only construct the proposed Coco and Encanto lands in this area and perhaps move plans for the Villains Land behind the Haunted Mansion attraction. It would be a fitting transition, walking from this attraction into a land of even more menacing infamy. And in having this expansion right at this spot, a restaurant located right here would be perfect! I personally feel it’s only a matter of time before we get to enjoy a Haunted Mansion-inspired eatery at Magic Kingdom Park. While it did take a while before a restaurant themed after the classic Jungle Cruise attraction came about, it did eventually happen. And that can be seen as an encouraging sign, along with the fact that the new Haunted Mansion movie will be coming out in 2023. I have no doubt that Disney will eventually see the need to treat the hunger haunting its Guests by bringing forth a new establishment that’s sure to have even the grimmest ghosts grinning. 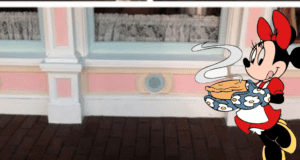 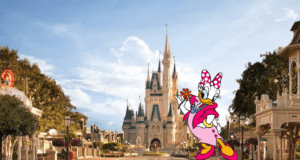