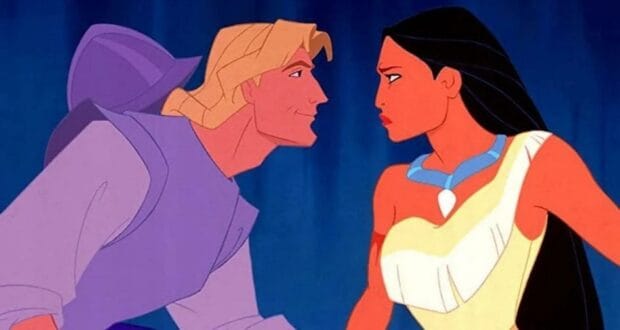 Inspired by the historical events of John Smith’s work in establishing England’s Jamestown Colony in what would become known as Virginia, Disney’s Pocahontas was Disney Animation’s first musical take on American history. But it was also one of the most controversial films of the time. 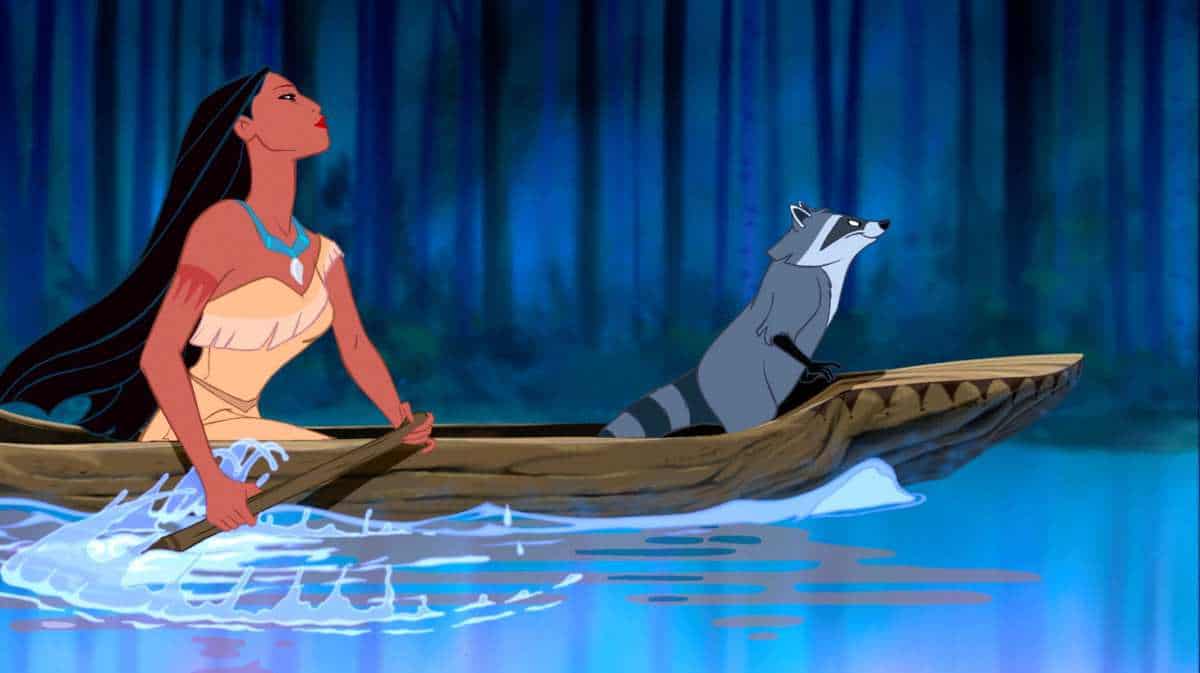 On the one hand, Disney delivered progressive changes after its 1992 film Aladdin reportedly enraged the Arab-American community. Pocahontas gave Disney fans the first Native American princess, the first interracial Disney couple, and the first of only two “Disney Princess” movies where the prince is the one that needs saving (the other being Tangled). It also delivered the first real attempt at representation-conscious casting, which brought in Native American actors like Russell Means (Chief Powhatan) and Irene Bedard (Pocahontas), one of the first attempts at utilizing cultural advisors, and a story that touched on the importance of the environment and the universal racism and misunderstanding that can be found in anyone.

Means, himself, saw the movie as a “vast improvement” over the long-established “savage” cliche trope.

Choreography consultant Hanay Geiogamah, artistic director of the American Indian Dance Theater, said, “Though Disney rearranged history, the thrust is authentic,” he says. “And since Russell Means is a tough cookie, they ain’t going to be profaning or defaming too much.” 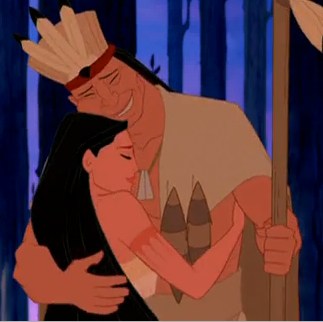 On the other, they delivered one of the few socio-political fumbles of the Disney Renaissance Era, which generated enough outrage from fans to not only essentially necessitate the delivery of a more historically-accurate sequel but also finally challenge Disney to hold themselves to a higher standard of authentic storytelling, especially regarding where to draw the line when crafting a fantasy from very real–and often tragic–stories and culture.

I admit it was difficult to dig past the critiques of a soon-to-be 30-year-old movie from Cancel Culture keyboard warriors who refuse to view moments of history from any other mindset than the unsympathetic, “enlightened” 2010s-2020s self-righteousness. But in finding the original reviews and statements from Native Americans at the time of the movie’s release, one general consensus remained clear: watering down and making light of super-dark fairytales was one thing, doing the same of a super-dark real story was another.

The real Pocahontas, daughter of the Powhatan Chief, was only 11 or 12 when John Smith arrived in the New World, and it was his erroneous diary–which reportedly fantasized about his relationship with her–was Disney’s source material. She never had anything close to the romantic relationship she had with John Smith. 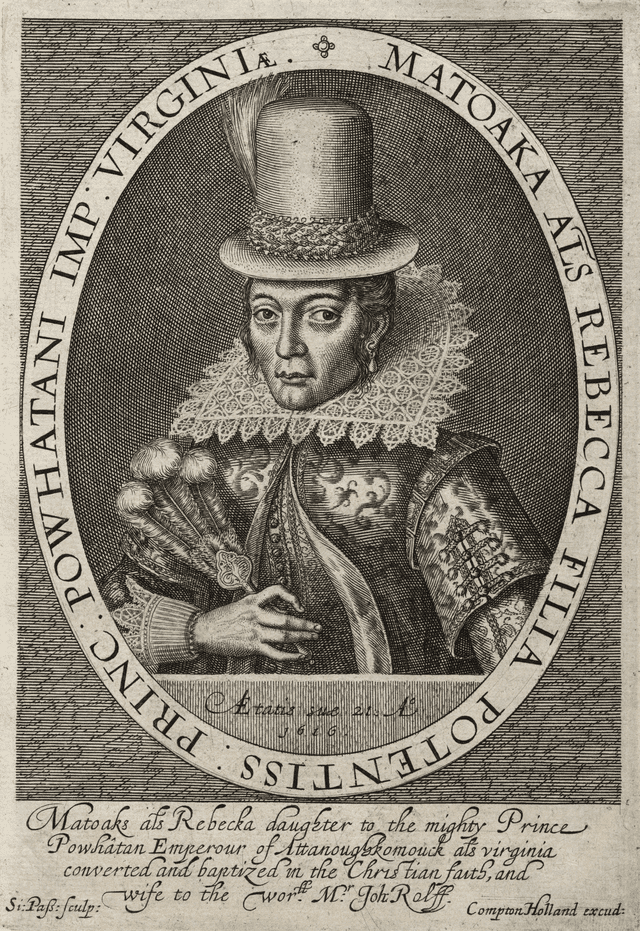 “Disney originally told the story of Pocahontas as we know her–a child between the age of 10 and 12 who showed reverence, but certainly no love, for John Smith,” Shirley Little Dove Custalow McGowan, a key consultant on the movie who teaches Native American education at schools, including the University of Virginia, told the Los Angeles Times in the wake of the film’s release. “By making her older and creating a romance you lose the notion of children as our future–a way of bridging the gap between cultures.” “Disney left out the most interesting part,” she continued. “Before dying in England at the age of 21, Pocahontas was kidnaped, baptized into Christianity and married John Rolfe–a man far more appropriate than John Smith, who was a barbarian and a troublemaker. My people are concerned because our story has already been changed so much.”

But through all of the debate, the folks at Disney clearly heard something: Hunger for a more historically accurate story. So, they decided to try again and turn Pocahontas’ real relationship into a sequel! 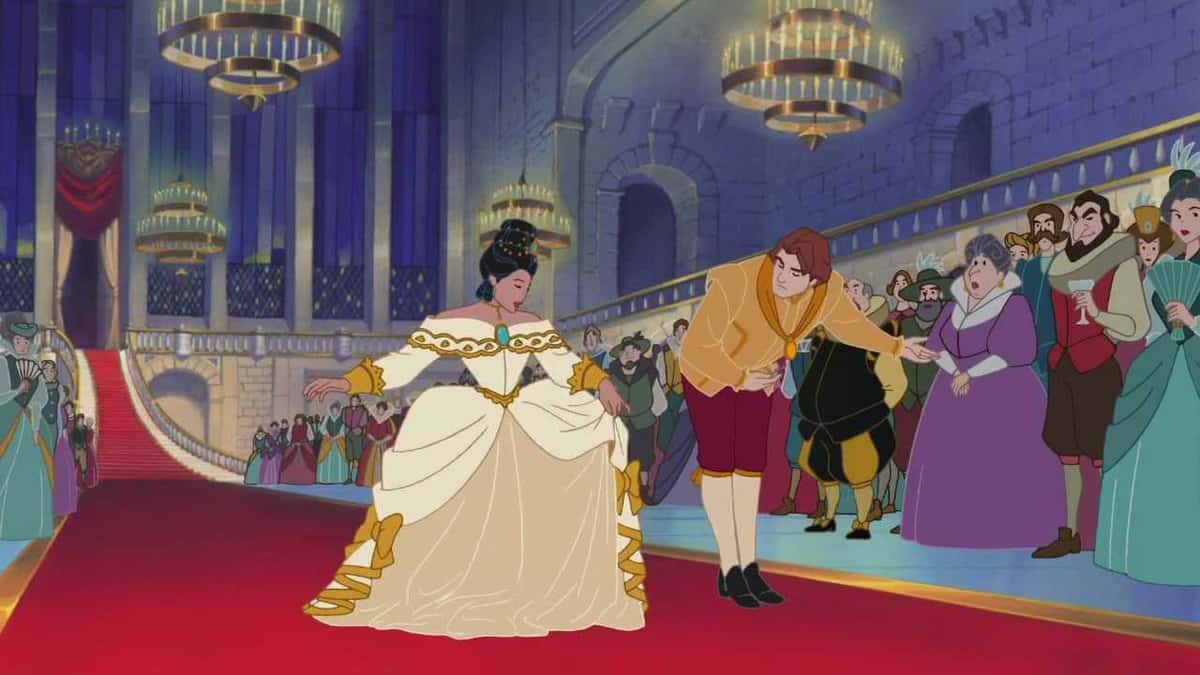 While most of its “cinematic criticism” appears to be directed at the blatant drop in animation and story quality–the key trait of all Disney’s straight-to-video projects–, the film still left a lot to be desired by some in its arguably more blatant romanticizing of history. Because the Walt Disney Animation Studios in the ’90s would never even consider creating a tragic story, they changed just enough history and stopped the movie just far enough along to probe a new apex of fact and fiction.

Instead of being kidnapped, she travels to England with her future husband as a pseudo-emissary. Disney still finds a way to paint a pretty rotten picture of how they attempt to “Westernize” her appearance–lightening her skin and everything (albeit essentially creating a knock-off of “Bring Honor to Us All” from Mulan).

The story is also, ironically, based on the idea that the New World Princess needs to set the record straight to King James I regarding what happened in Jamestown, but it does end with Pocahontas falling in love with the man who would be her husband in real life. We do not see her baptized into the Church of England, at which time she replaced her Powhatan name with the name Rebecca, nor did we see her son. And we are not exposed to her fate of succumbing to illness at the age animators arguably make her.

Was it a complete course correction? Absolutely not. But it was still a movie-sized edit to a Disney story that charted its new course toward a search for a higher level of truly authentic storytelling.

Now the year is 2022, and as I look back, it is clear to me that Disney’s decision to share the story of Pocahontas and how they did it was necessary and an inherent good for the entire movie-making industry because of the controversy it created.

The topic of authentic storytelling is now an outspoken pillar of The Walt Disney Company. Today, studios like Disney and Pixar would not even consider making a culturally authentic movie without first creating a consulting team, as well as animators and actors who live the subject culture. Now, look at Moana, Coco, Encanto, Luca, and Brave.

But the debate over Pocahontas still leaves us with a question: where do we draw the line in the sand? What is the limit to where we can take a subject and romanticize or fantasize in order to fulfill the story Disney has continued the exploration of that limit over the past near-30 years–especially with its remakes.

The consensus so far is that there is basically no clear consensus. 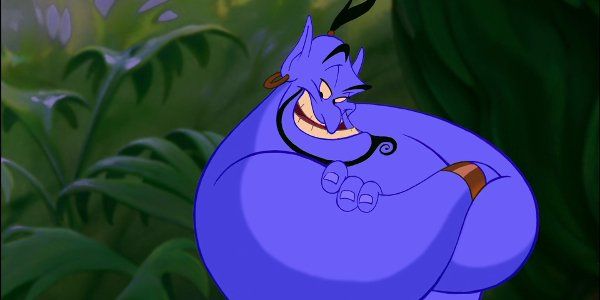 Robin Williams arguably had no business being in a movie based on an Arabian classic (let alone rattling off Jewish idioms the entire time), and Eddie Murphy arguably had no business being in a retelling of a Chinese epic poem. Yet, Williams’ Genie and Murphy’s Mushu remain two of the most beloved Disney characters of all time, and the songs from both of those movies are beloved worldwide to this day. Meanwhile, in the search for “authenticity,” Disney created a live-action remake of Aladdin, which featured eye-rolling politically correct lyric rewrites and cast a lead actor who may have been worthy of the lamp but no other acting jobs for a significant amount of time. Disney also made a remake of Mulan, which–putting aside everything else that was wrong with it–was labeled as being too American for Chinese viewers and too Chinese for American viewers.

On the flip side, Dwayne Johnson’s portrayal of Maui and Awkwafina’s Sisu add that layer of “cultural representation” to those zany, comical tropes in the same vein as Willaims and Murphy. 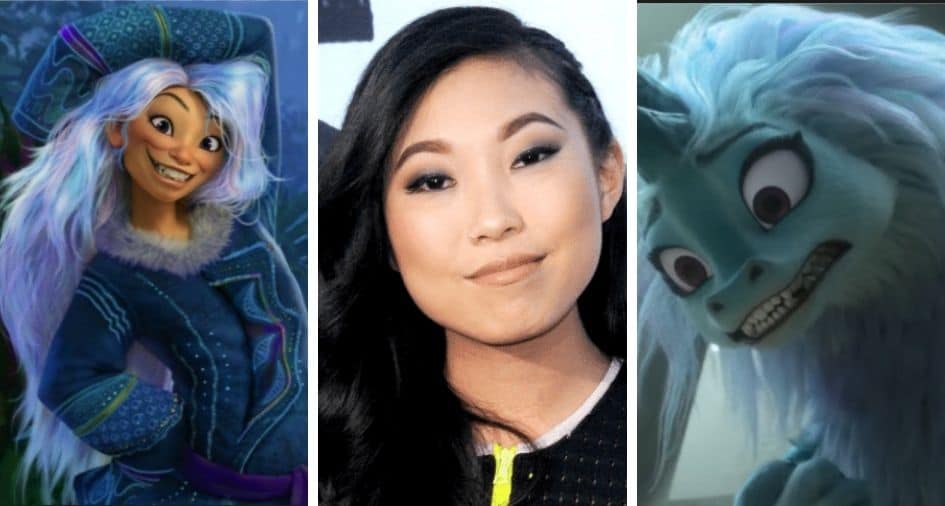 John Goodman is from New Orleans. Yet he was an integral Cast Member of both Emperor’s New Groove (set in the Peruvian Andes) and Princess and the Frog (set in New Orleans).

Disney animators clearly took some creative liberties with the fish in The Little Mermaid (1989), while the CGI team was criticized for going far too “authentic” in the remake of The Lion King.

Now, fans debate about the appropriate levels of superficial “representation” in the fictional world of remakes like Pinocchio, Beauty and the Beast, Snow White and the Seven Dwarfs, and now The Little Mermaid. Related: OpEd: ‘Little Mermaid’ will be Amazing, But ‘Diversity’ Talk is Ruining It!

Don’t get me wrong, I know that Pocahontas’ story was a real-life tragedy that spotlights a tumultuous chapter of American history, and it’s probably a good idea to avoid trying to romanticize a period of history that is currently viewed by the Twitter mobs as unredeemable for the time being (as proposing that any positive story–real or fake–occurred in an actively antagonized time period is impermissible and seditious to the advancing Narrative, right?). I also don’t mean to say that all the movies that came before it with now politically unacceptable casts, scripts, and other standards are not authentic–because they still are.

But I believe that it was during Pocahontas’ production and release that Disney really started to beg a still-unanswered question:

What is Disney obligated, if at all, to get factually right in its fictional movies? 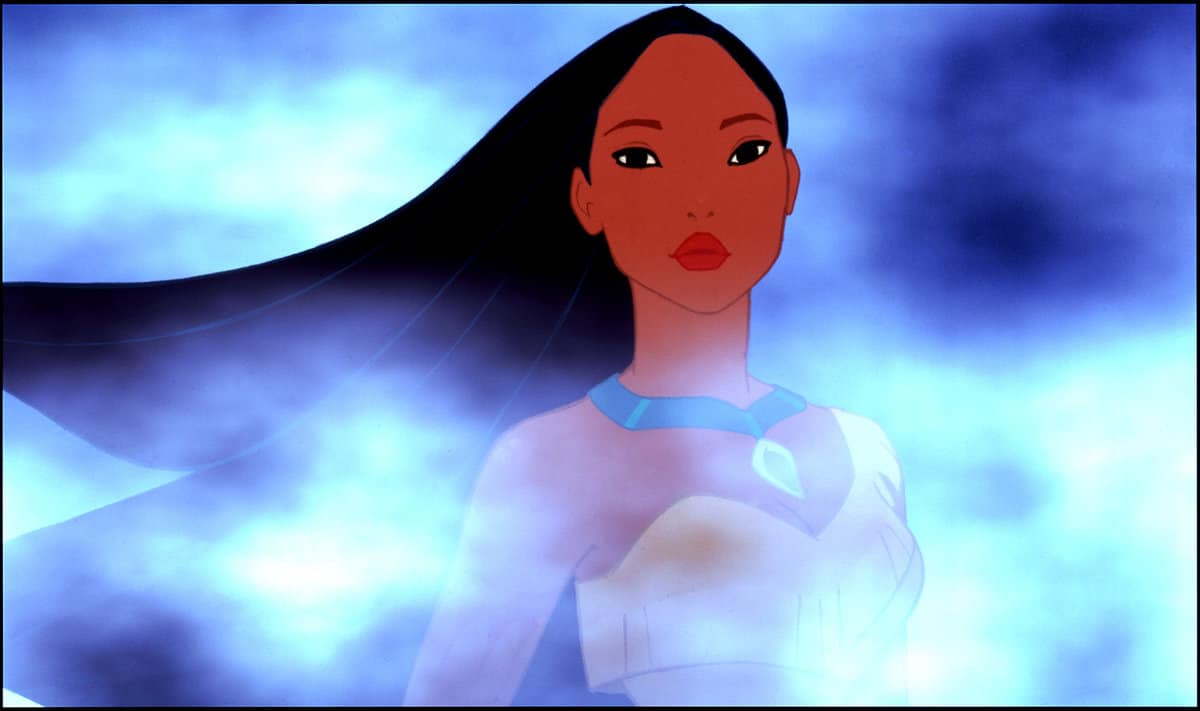