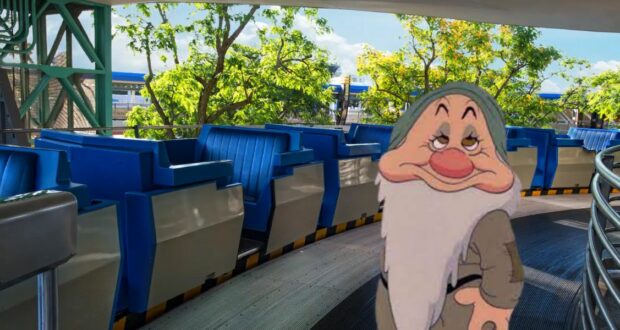 Let’s be honest: Disney Park days are magical but also exhausting. After a long morning under the Florida sun, a quick power nap is often warranted. But who wants to go back to their car or Resort Hotel in the middle of the day?

So, for those who still want to make the most of their day, here are three rides that are the perfect power nap spots to help give you recharge the batteries to make it through the afternoon to the Fireworks.

Hop aboard the Tomorrowland Transit Authority PeopleMover for a grand-circle naptime. The PeopleMover is one of the longest and most private attractions in all four Disney World Theme Parks.

Just put your feet up on the row opposite of you, lean back, and shut those eyes for a few minutes. The sudden changes in light and dark will help keep you from diving into REM sleep, and worst case scenario, you get woken up by a Cast Member in front of everyone.

This one, I can speak from personal experience. EPCOT requires a lot of walking. And after a few laps of eating and drinking around the world, one will feel a special kind of “accomplished” exhaustion. But then 2:00 pm rolls around, and it is time to Park Hop.

The only way to do it is to grab a window seat on the Highway in the Sky and rest those eyes for the 15-minute journey back to the Transportation and Ticket Center.

The only downside to this option is that the chances of you getting an entire cabin to yourself are rare. So, be sure to be okay with falling asleep discretely in front of other people.

Out of all the possible nap spots around the property, this is my favorite. Sit back in a secluding chair with a proper headrest and be whisked away to dreamland as the story of Spaceship Earth becomes a bedtime story.

Spaceship Earth is a slow spin around the inside of the geosphere in nice cool A/C that offers a pleasant snooze without anybody else realizing it. That is one of the subtly magical aspects of the Walt Disney World Resort.

There are times when it is all about “go go go,” but the Imagineers knew how to craft moments into each person’s story to help them wind down and take a load off for a bit. And unlike other areas like Mickey’s Philharmagic and other shows, there areas remain relatively quiet and allow you an extra level of relaxation.

We at Disney Fanatic should clarify that we do not condone sleeping on any Disney World attractions. But, we recognize that there are better areas to “rest one’s eyes” and recharge than others. We will continue to update our readers on Disney Parks news and stories as more developments come to light.