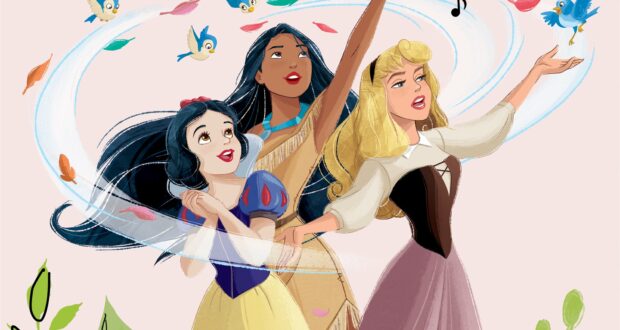 The 1991 movie Beauty and the Beast has been getting a lot of love recently for its 30th anniversary (ranging from new bags and new backpacks to new pins and new Belle wedding dresses from Allure Bridals), and RockLove Jewelry is keeping the love going with a brand new Disney Princess Storybook Locket collection that includes a Beauty and the Beast Storybook pendant necklace alongside four other Disney Princess movie lockets! 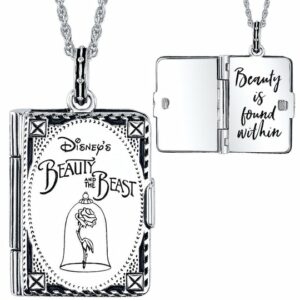 The other lockets and newest products in this Disney princess collection designed by Allison Cimino are representations of the Disney princess movies Sleeping Beauty (1959), Snow White and the Seven Dwarfs (1937), Cinderella (1950), and The Little Mermaid (1989). More lockets are expected to come later in 2022. Each pendant necklace is intricately detailed in its design and serves as a reflection of the detailed storytelling that goes into Disney films. 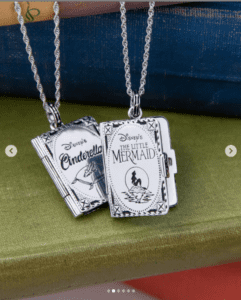 The Cinderella locket shows off the famous glass slipper that Cinderella wears to the ball until midnight, while the Little Mermaid locket and the Sleeping Beauty locket both show Ariel and Aurora in some iconic silhouettes from their Disney movies. The Snow White and the Seven Dwarfs locket, naturally, is sporting a red apple from the fairy tale. There are also Disney princess sayings inside each locket, such as “Dream the impossible”, making these pendants perfect gifts for a true Disney collector! 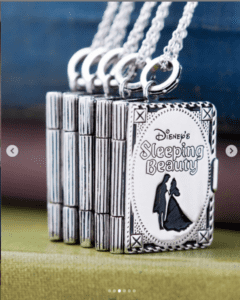 RockLove Jewelry shared glimpses of the new collection on Instagram with the following caption: “Compassion, learning, to follow your dreams? What will be your story this new year? 📚📖 Our first five @Disney X RockLove Storybook Lockets, following chronological order, with more on the way in 2022″! 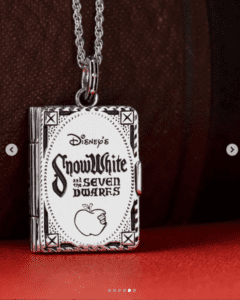 Unfortunately, these lockets are not particularly cheap; each one costs $175. RockLove Jewelry is designed by Allison Cimino in her New York studio, and the brand is known for using the highest quality precious metals; each pendant is solid sterling silver and features “an adjustable sterling silver rope chain with [a] graceful extender weight”. If you want to splurge, however, this jewelry is definitely an elegant accessory.

Each piece of jewelry also comes in a Disney X RockLove Boutique Box that is “full of detailed storytelling inside and out, including an embossed exterior and metallic silkscreened character art inside”. There’s even “vibrant colorful flocking [that] protects your RockLove jewelry and includes a Disney X RockLove branded luxury travel pouch”!

RockLove Jewelry also has Rocklove jewelry products in Star Wars, Hocus Pocus, DC, and Marvel Studios collections (including one for Scarlett Johansson’s character Black Widow) as well as Star Trek collections like the Klingon collection and many other Disney pendants within its Disney collections. There was also a new Pandora jewelry collection honoring the Beauty and the Beast, so don’t forget to check out that one too!