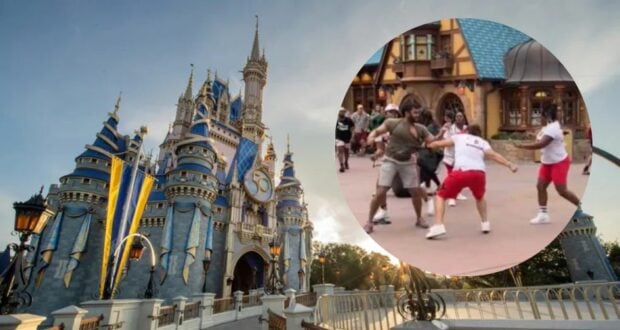 “The Most Magical Place on Earth” is making national news… but not for the pixie dust reasons we prefer to hear about. Instead, a massive Magic Kingdom fight is taking the spotlight as the local sheriffs provide an arrest update.

We previously reported on Wednesday, July 20, 2022, a large brawl broke out at Magic Kingdom Park in Walt Disney World Resort. The incident took place in the Fantasyland portion of the Park between the back of Cinderella Castle and Peter Pan’s Flight.

Further eyewitness details were shared surrounding the reasoning as to why the fight started. When one person got out of Mickey’s PhilharMagic attraction standby line to retrieve her phone from her ECV, she went to get back in line to catch up with her family waiting.

Another family did not want to let her go by and pushed her. When the families exited the attraction, they began brawling outside of the exit with Park Guests screaming in the background.

Not only has the fight now made national news, but the Fox News report has an update shared by the Orange County Sherriff’s Office.

According to the report, one of the men in the fight was hospitalized with a facial laceration. Other Guests involved in the fight suffered bruising.

The Orange County Sheriff’s Office confirmed the hospitalization and told Fox News that they arrested three people for misdemeanor battery.

Sadly, this isn’t the first time we’ve seen fights at a Disney Park, as both Walt Disney World Resort and Disneyland Resort have had recent incidents.

Knott’s Berry Farm has implemented a new chaperone policy in an attempt to cut down on the number of fights unfolding within its theme park.

We still feel like Disney is one of the safest Parks to visit in the nation, but it is hard to see it make national news for such a negative thing.