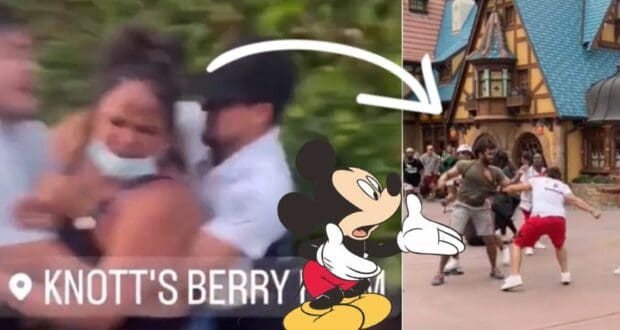 Should Disney Crack Down on Fights Like Knott’s Berry Farm?

Sadly, the popular Knott’s Berry Farm amusement park in Buena Park, California, has recently seen an influx in a handful of fights among its Guests. So, Knott’s Berry Farm is working to handle unruly crowds with a new policy… leaving us to wonder… should Disney do the same?

One fight was videoed by @AlexaValadez15, as posted below:

The fights are horrible to watch as Knotts Berry Farm security seems to be harmed in the fights, as shown in the video below posted by @times_red:

The safety of Knott’s Berry Farm’s Guests and associates was such a concern, that Knott’s Berry made the decision to close the Park three hours early “due to unruly behaviors and altercations involving a number of teenagers,” as posted in the statement below:

The most recent update from Knott’s Berry Farm announces a new Park Policy is now in place, noting:

“For decades, Knott’s Berry Farm has been a place where families and friends come together to enjoy a one-of-a-kind Park full of homegrown experiences and immersive entertainment. Millions of Guests have counted on us for wholesome family fun, and we’re committed to keeping that promise going forward. As part of that commitment, the Park will implement a chaperone policy beginning Friday, July 22, 2022, remaining in effect on Fridays and Saturdays until further notice.”

This new chaperone policy at Knott’s Berry Farm comes during the news of a massive fight at Magic Kingdom Park on July 20, 2022, in Walt Disney World Resort. While details from an eyewitness don’t mention teenagers involved in the fight, confrontations seem to be an ever-growing issue at the Disney Parks.

We’ve seen fights unfold in Toy Story Land, outside of nighttime spectaculars, with not even the most “magical” of Disney Parks free from Guests making poor decisions.

While we believe many of the fights at Walt Disney World and Disneyland Resort have involved adults, there have been children caught in the altercations, not to mention the numerous children that see the awful incidents unfold in a Disney Park.

Disney has yet to comment on the fights or any policy changes it may implement, such as Knott’s Berry Farm’s new theme park policy. We do, however, feel there is a strong Disney security presence while in the Parks that ensures the safety of its Guests.