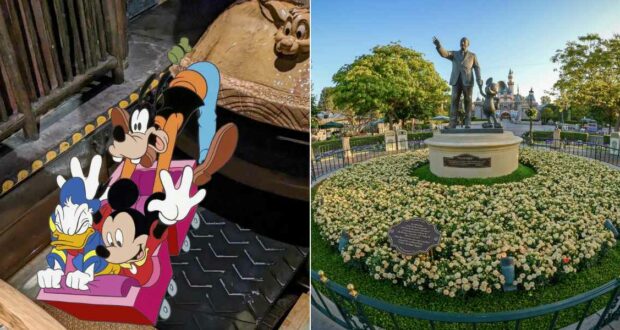 A surprising cause was revealed for the 5 p.m. shutdown of Splash Mountain at a Disney Park yesterday, leaving some fans in tears.

The Disneyland Resort is home to two incredible Parks—Disneyland Park and Disney California Adventure Park—which have myriad rides, attractions, and shows that allow Guests to take in the Disney experience to their heart’s content. Think like Haunted Mansion, Jungle Cruise, Pirates of the Caribbean, Indiana Jones Adventure, and more.

All Guests who are visiting a Disney Resort and Disney Theme Park know to expect ride shutdowns during their Walt Disney World vacation or Disneyland vacation. And that’s just what happened recently at Disneyland Resort, but for a surprising and unexpected reason.

It turns out a little marsupial caused a 5 p.m. shutdown of the soon-to-be rethemed Splash Mountain, as a Guest, u/itsamekt, discovered and shared to the social media platform Reddit.

Guests and fans in the comments were very taken with the little critter.

u/Sunny_Fields agreed, “not angry at all for this shut down. please tend to its injuries if there are any and give it some love. chances are its mom is dead or missing and this baby got disoriented/lost. ?”

Most users were very moved by seeing the scared possum in the ride:

A few Guests even brought the beloved mouse into the picture. From u/Jordaneer,

Man, you think they could feed Mickey more considering his face is on the entrance of the park.

While there has been no official word on it, this sort of situation happens enough at the Parks that Disney is equipped to deal with it, and as many fans pointed out, and as many fans pointed out, the Walt Disney Company and its resorts—Walt Disney World Resort and Disneyland Resort—has a reputation for taking care of their animals. Here’s hoping the possum was saved and returned to safety.

Disney ride shut down Disneyland Resort Splash Mountain 2022-12-28
Priyanka
Previous: Genie + Sells Out In Disney Park For the First Time
Next: Southwest CEO Issues Statement as Over 2/3 of Flights Canceled