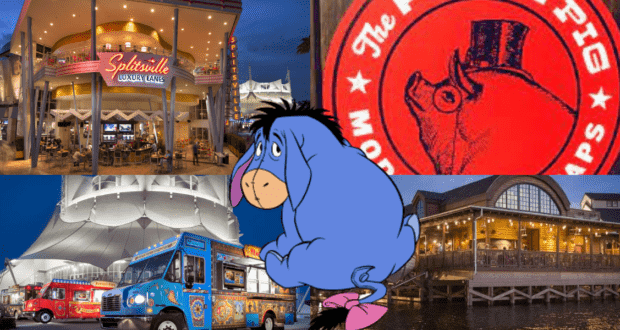 The Most Underrated Places to Eat at Disney Springs

When most people hear the term “Disney Springs” two concepts often come to mind—shopping and dining. In considering the latter, you’re likely to arrive at the conclusion that there are just so many excellent options to pick and choose from! And you would be right on that account. But even the less-seasoned visitors to Disney Springs can easily spout off some of the more popular restaurant venues that get mentioned time and again and are always bustling with crowds. But are you aware of all those other lesser-known options that often get overshadowed by the “popular crowd”? Even those you may have heard about often feature hidden gem menu fixings you never before realized. Here is a look at eight great but unfairly underrated places to eat at Disney Springs.

8. The Basket at Wine Bar George

Wine Bar George isn’t exactly underrated in the traditional sense. It is, after all, a pretty well-known bar with a claim to fame for being the only one in Florida led by a Master Sommelier—George Miliotes. Its underrated status lies in the fact that when most folks ponder potential places to eat in Disney Springs, this one doesn’t come readily to mind. The all-too-common assumption is that this is a place to enjoy stellar drinks but not, particularly, one to consider as a viable mealtime option. But that’s what “The Basket” at Wine Bar George is slowly working to correct with picnic-like offerings and plenty of filling fare.

It’s a lesser-known fact that George Miliotes was part of the opening team for California Grill, on location at Disney’s Contemporary Resort back in the day. And he certainly knows a thing or two about food and beverage pairings. As it goes, he presents quite an impressive spread in the way of entrée selections, offered for dinner, lunchtime, and even for weekend brunch. 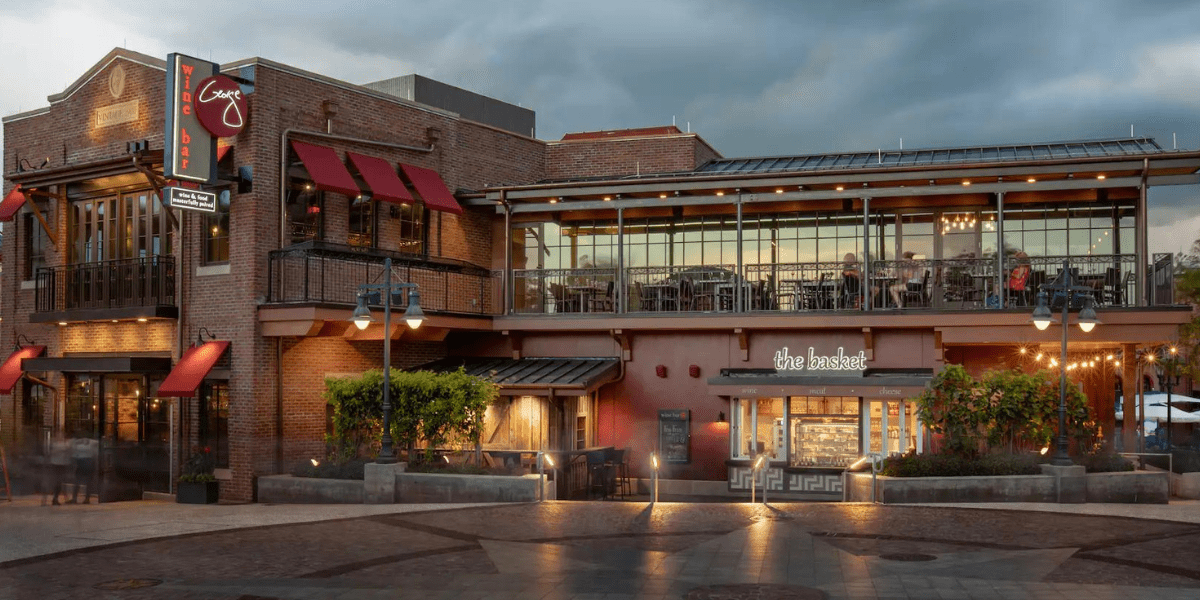 Related: This Is the Most Underrated Restaurant at Disney Resorts

Here’s another example of an establishment that’s more commonly regarded as a place to sit awhile and enjoy a lavish libation but less regarded as an option to grab a bite to eat at. Fans of Indiana Jones: Raiders of the Lost Ark will immediately recognize certain callouts surrounding the lounge, from its vintage aviation décor to references of the film’s character Jock Lindsey. And there are in fact many uniquely named items featured on both the food and drink menu.

What many do not immediately realize, however, is that the food you can order here goes above and beyond the usual light bites and snack fare that other watering holes are commonly known for. Instead, you have quite an array of filling vittles, some of which include Snakebite Sliders, Dr. Forrestal’s Churrasco, Club Obi Wan Chicken Wings, Fraulein’s Flatbreads (Berbere Flank Steak and Margherita varieties), and Tanis Tacos. Other options are also offered as well, including limited-time seasonal specials. 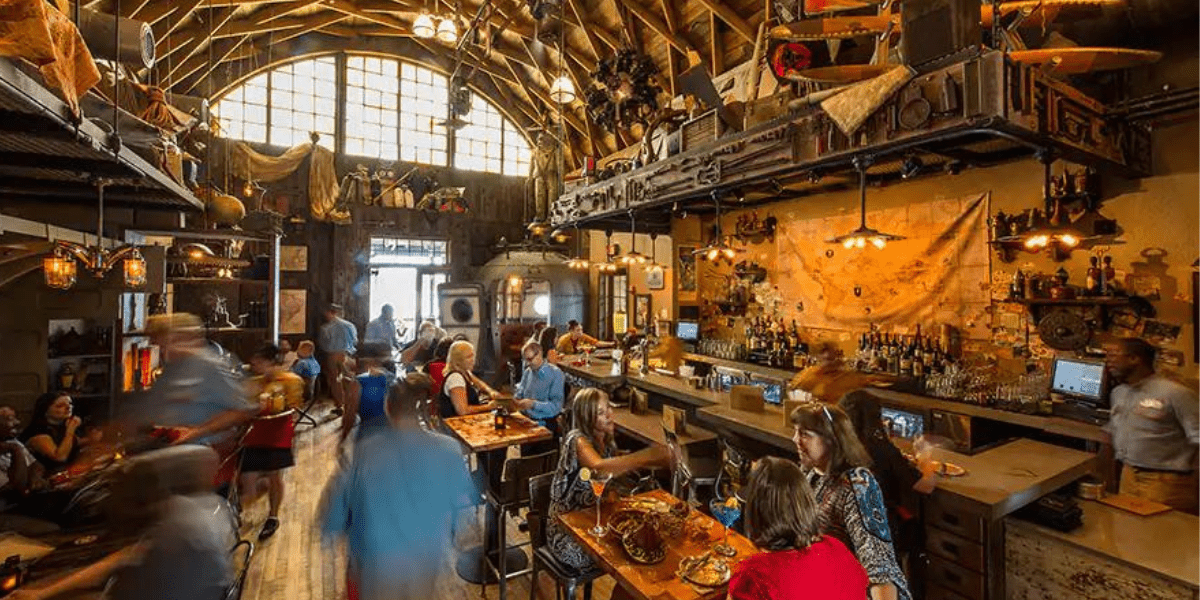 Related: Our 6 Most Underrated Dining Experiences at Walt Disney World

Casey’s Corner over at Disney’s Magic Kingdom Park is often regarded as the best Disney restaurant for hot dogs. But this little quick-service establishment making up the scene at Disney Springs doesn’t get nearly the same level of acclaim, which is surprising given the fact that the menu is pretty extensive and varied as far as wiener offerings are concerned. Traditional hot dogs, foot-longs, and chili-cheese dogs are of course on the menu, but more unique features include their Hawaiian Island Dog, New York Pastrami, Mardi Gras Smoked Crawdog, and even a Plant-Based Bratwurst Sausage. 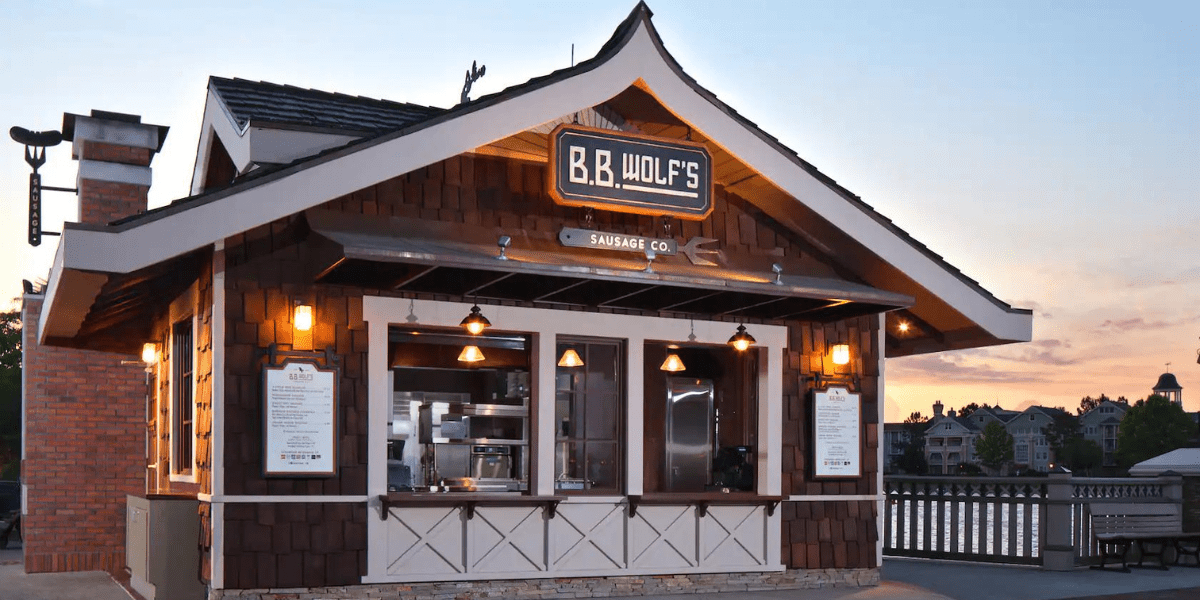 It’s surprising when you consider the many Disney Springs visitors who don’t even know about the various food truck setups. And those who may have seen them from afar sometimes brush off the idea that they serve anything other than glorified snacks at best. But this couldn’t be further from the truth, as each varying truck offers up its own unique niche. The 4 Rivers Cantina Barbacoa Food Truck, for instance, is widely known for Mexican-inspired street food fare. The Mac & Cheese truck presents creative spins to its namesake offering. Local Green Orlando accentuates healthy eating with fresh vegetarian and pescatarian specialties. Then there’s the Hot Diggity Dog truck—another doggone good option that gets overshadowed by the more popular Casey’s Corner.

Do take note that the food truck scene is subject to changes from time to time. But loyal eaters know that opting for a meal on the scene here truly pays off via versatility as well as that creative tactic of mixing and matching. 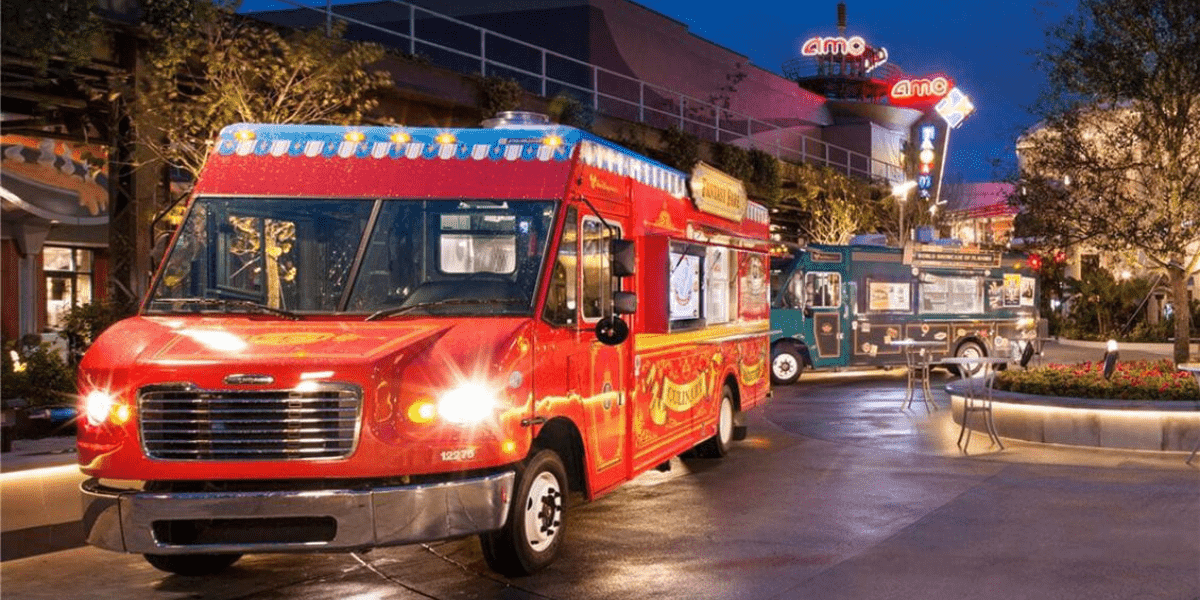 Related: These Are the Quick Service Restaurants You Need to Try at Disney Springs

Bowling alley food isn’t usually credited with being on par with restaurant fare, but Splitsville isn’t your usual bowling alley. Optimal on every level, it’s a place where families can easily spend a large portion of their day and do far more in the way of recreational diversions than just bowling alone. So, is it any wonder that they would sport an onsite restaurant that goes above and beyond in what it offers?

Pizzas don’t make up the entire menu, though. A broad range of other entrée selections, stand-out appetizers, and even impressive sushi selections can be rightfully enjoyed here as well. 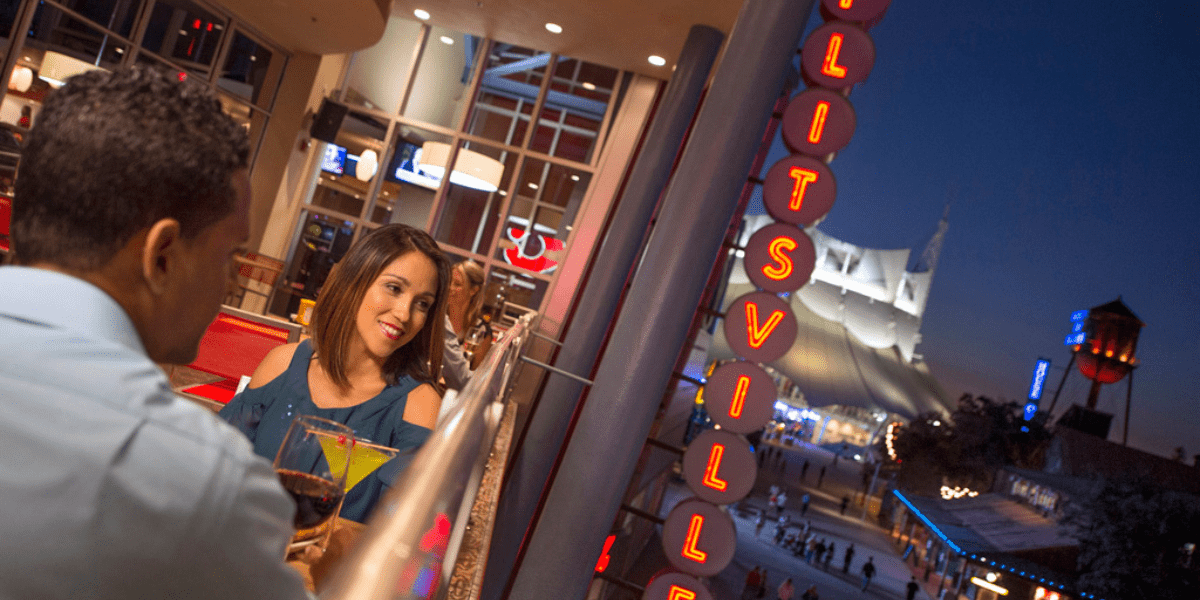 Sadly, this quick-service establishment is sometimes dismissed for being just another lackluster barbecue joint. But the reality is that it is run by an award-winning family team of chefs in the Greater Orlando Area with numerous other well-known restaurants to their credit in addition. The team includes James Petrakis, his wife Julie Petrakis, and his brother Brian Petrakis.

As far as their “modern barbecue” fixings go, this term is a vast understatement and doesn’t do them nearly enough justice. The innovative menu is more a compilation of enhanced fusion fixings that transform casual comfort foods into flavorful novel renditions with a twist. Nothing is done on an average level here. Even their Mac and Cheese gets a classy embellishment with aged cheddar and breadcrumbs. And then there are those decadent desserts to sweeten the deal, presented with the same quality you’d expect to find from an upscale restaurant. Such favored features include their Bourbon Chocolate Chip Cookie, Red Velvet Cake, and their ever-popular Key Lime Pie. 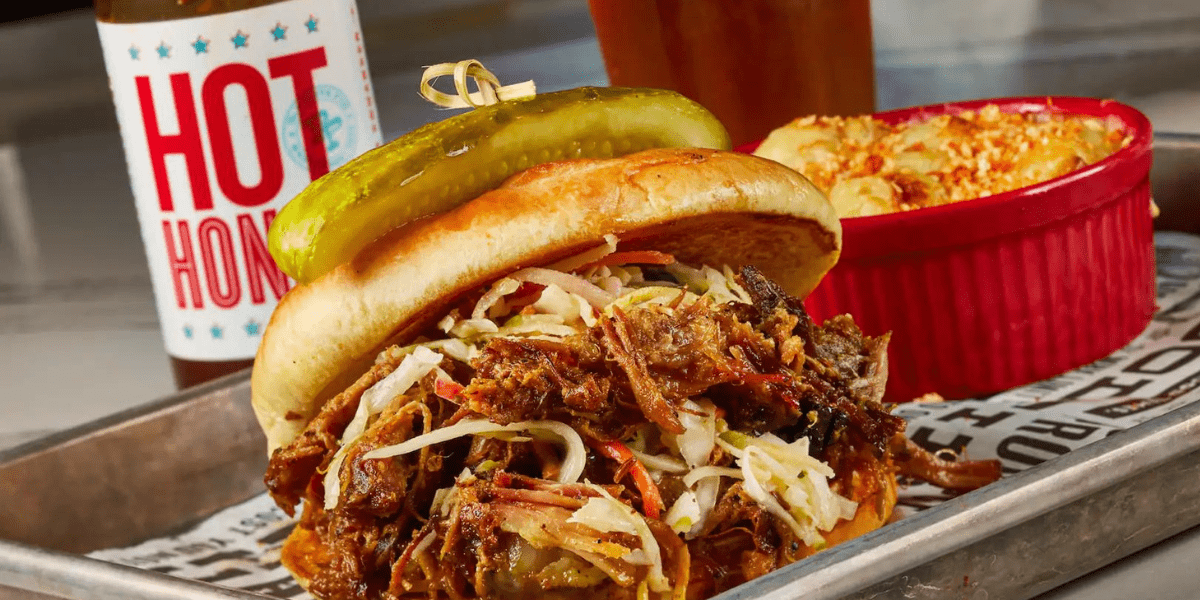 Maria & Enzo’s Ristorante is one of the well-known popular picks at Disney Springs. Serving as a revamped former air terminal-turned-Italian restaurant, the building also contains the quick-service Pizza Ponte operation as well as that secretive speakeasy-themed lounge known as Enzo’s Hideaway. And while it can be argued that enough people now know about Enzo’s Hideaway (at least by name) it’s still an underrated experience for two very good reasons. First, there’s the whole bit about it having a hidden entrance. This is sometimes a deterrence to passersby who aren’t up to the challenge of trying to locate its source and instead end up opting for more obvious venues that don’t require guesswork in finding them. But there’s another, perhaps even bigger, story that gets overlooked, and that is the fact that Enzo’s Hideaway is more than just a speakeasy; it is a full-service Italian restaurant also. Sure, you wouldn’t expect to find an Italian restaurant hiding within an Italian restaurant of greater acclaim, but it cannot be denied that they feature a most impressive Sicilian-style menu with plenty of phenomenal fixings. But given its reputation and placement, Maria & Enzo’s remains the more popular go-to. 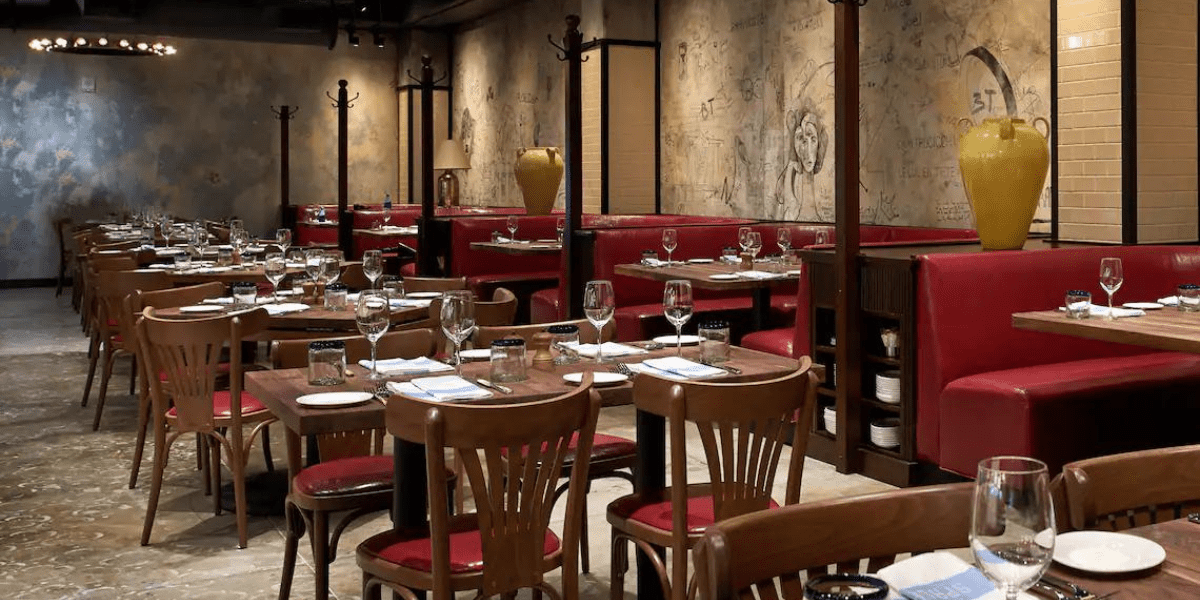 Related: Have You Ever Visited Disney World’s Almost Secret Lounge?

Here is another underrated place where you can find great Italian right at Disney Springs. Like Enzo’s Hideaway, Terralina Crafted Italian all too often gets overshadowed by the more prominent Maria & Enzo’s Ristorante. Not only that, but when most folks taking a vacation to Walt Disney World Resort think of fine Italian establishments, their thoughts tend to gravitate to those popular options within the Italy Pavilion of the World Showcase in EPCOT. Even Tutto Italia Ristorante over at Disney’s BoardWalk and Mama Melrose’s Ristorante Italiano onsite at Disney’s Hollywood Studios tend to garner more popularity. But Terralina Crafted Italian is indeed an exceptional Italian establishment that doesn’t get nearly the credit that it deserves when ranked among Disney World restaurants.

Led by Executive Chef Justin Plank, they feature some of the freshest, most flavorful presentations of well-loved traditional Italian classics. From hand-tossed pizzas to signature pasta specialties, pair that with delicious wine and an intimate, inviting atmosphere and it remains a mystery why this place doesn’t get more prominent recognition. 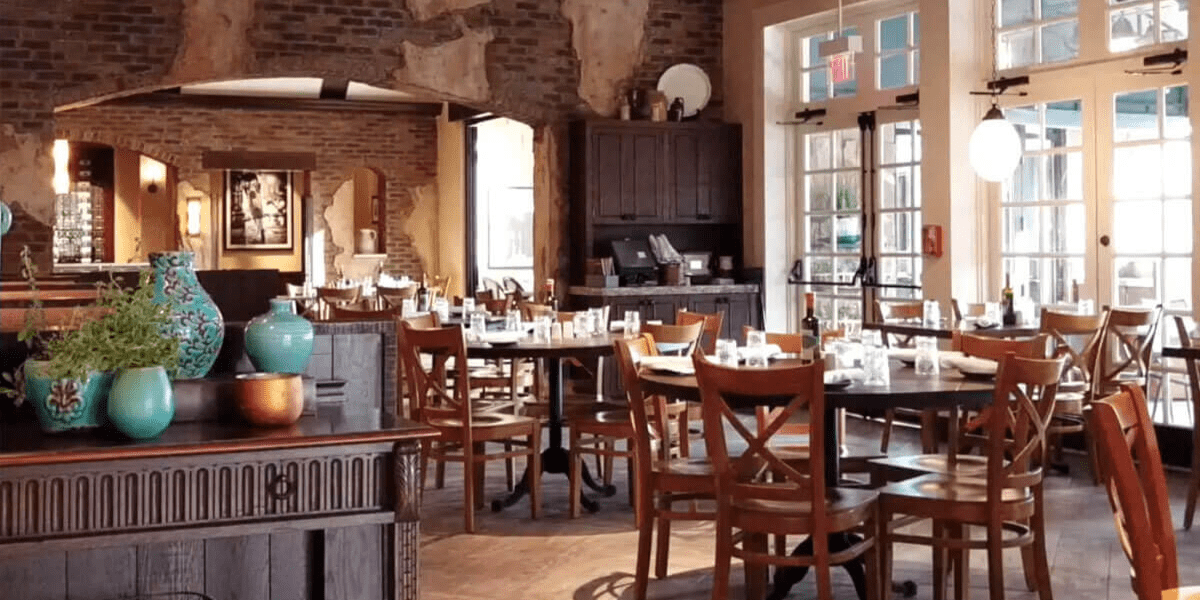 The dining scene at Disney Springs is very profuse and provides plentiful options that can entice even the pickiest palates. But it is perhaps the vast versatility of having so many establishments all in one place that tends to highlight certain dominating dining venues while unjustly pushing others into the background. All the same, each and every eatery has something special to offer and rightfully deserves praise for what they present.