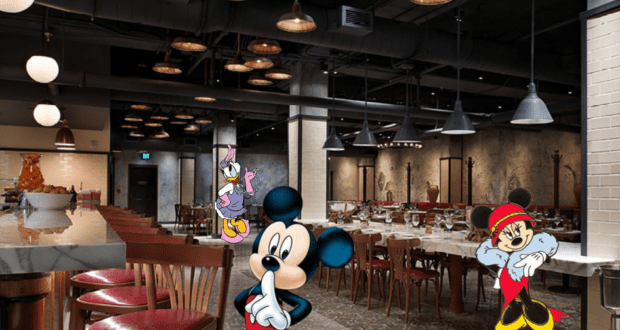 Have You Ever Visited Disney World’s Almost Secret Lounge?

By now, most folks who frequent Walt Disney World Resort and its affiliated venues know that the bar and lounge scene here is pretty impressive, to say the least. In keeping with their need to implement such elaborate theming at just about every single one of their onsite establishments, Disney lounges are no exception with their ability to excel in providing impressive presentations.

You’ve undoubtedly heard great things about Trader Sam’s Grog Grotto over at Disney’s Polynesian Village Resort and its acclaim for featuring in-house special effects in tandem with specific drink orders. Then there are those esoteric Club 33 locations hidden throughout the four theme parks—a privilege reserved only for exclusive members of an elite class.

But have you ever heard about that other almost secret lounge—that unassuming spot over in Disney Springs known as Enzo’s Hideaway? Well, we’re shedding a little light on the mystery of this uniquely hindered haunt in full detail.

Enzo’s Hideaway may be a secret underground establishment, but it’s quite literally hidden in plain sight. You’ll find it nestled within The Landing location at Disney Springs, under an unassuming rotund pillar-like archway. It’s marked on the top by a modest red sign, but the callout is done so in a very discrete fashion, making it fairly easy to miss if you’re too busy taking in the sights of the other more overt standout options, like STK Orlando, the BOATHOUSE, The Edison, etc.

How Do You Enter?

The first thing you need to know about getting into Enzo’s Hideaway is that despite all the secrecy surrounding it, all are welcome. So, no, this isn’t on the same level of exclusiveness as Club 33, nor do you need to present any form of the membership card or perform some secret handshake.

Don’t be shy about entering by way of the aforementioned archway. Yes, it is open; no, it isn’t some employees-only doorway, and yes, it’s there for your personal use. 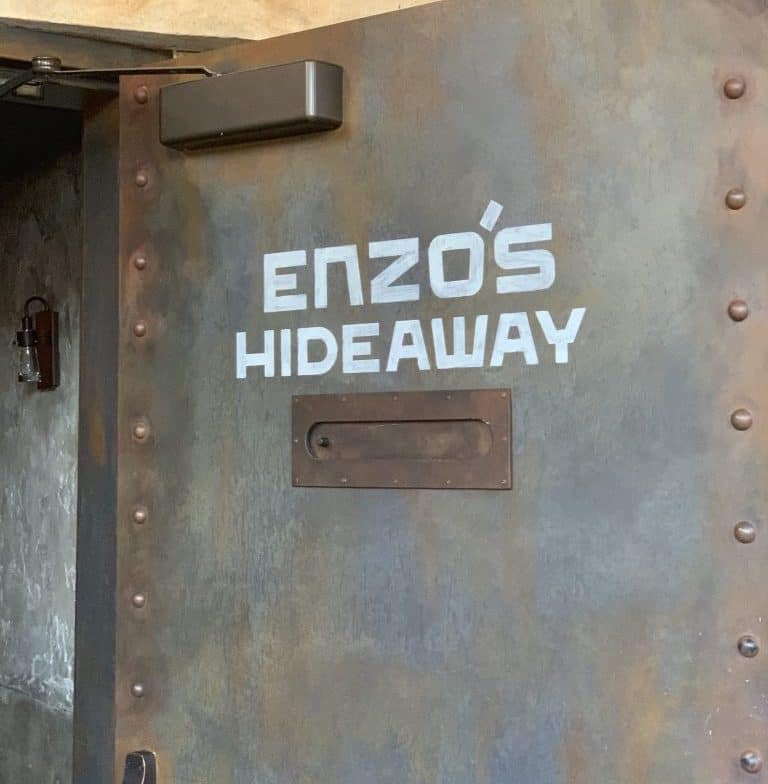 Credit: Love of the Magic

An alternate entranceway that will initially take you into Enzo’s Hideaway is through the larger encompassing Italian restaurant—Maria & Enzo’s. If entering this way, you will just need to follow along a secret hallway tunnel to take you on your way. 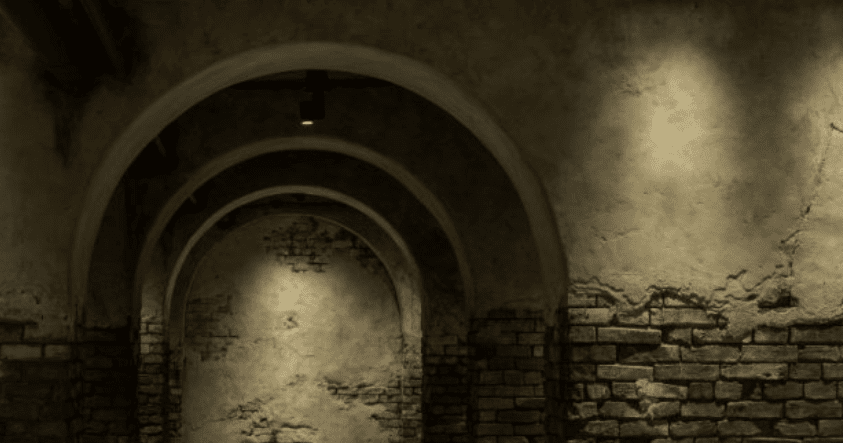 Perhaps you’re wondering why Enzo’s Hideaway is so hidden. Well, it all plays into the elaborate theme Disney has designated for this establishment—that of a 1920s speakeasy, hearkening back to the days of Prohibition. To better elaborate on the backstory for Enzo’s Hideaway, we must first explain how it all ties in with the theme that Maria & Enzo’s Ristorante follows.

Ever since Downtown Disney was transformed into Disney Springs, the surrounding social district has undergone a major retheming, resulting in an impressive, intricately connected faux history for all the businesses here. As the legend goes, Disney Springs was once a thriving town founded around one of Florida’s famed springs. Each building and structure representing a business today has its own established historical foundations for how it once operated in the town long ago.

Related: 15 Reasons Why Disney Springs Is Now One Of Our Favorite Places To Visit!

Maria & Enzo’s Ristorante encompasses a grand edifice that once served as the town’s airport terminal. Maria and Enzo were Italian immigrants who once operated a much smaller, quick-service operation (which is where Pizza Ponte comes in) located within the terminal.

But when the opportunity came about for them to purchase the entire closed terminal, they jumped on it and got to work on revamping it as a full-service, authentic Italian restaurant. They also decided to keep operations going for Pizza Ponte as well.

During the building’s prepping process, Enzo made the discovery of a series of interconnected tunnels underneath the building. These tunnels were once used for rum-running by bootleggers at the height of the dry years of Prohibition. The path ended up leading to a fully intact speakeasy lounge, which Enzo saw great potential in reviving.

And so, he decided to breathe new life into the since-shuttered underground establishment, creating the buzzing lounge we all know today as Enzo’s Hideaway. 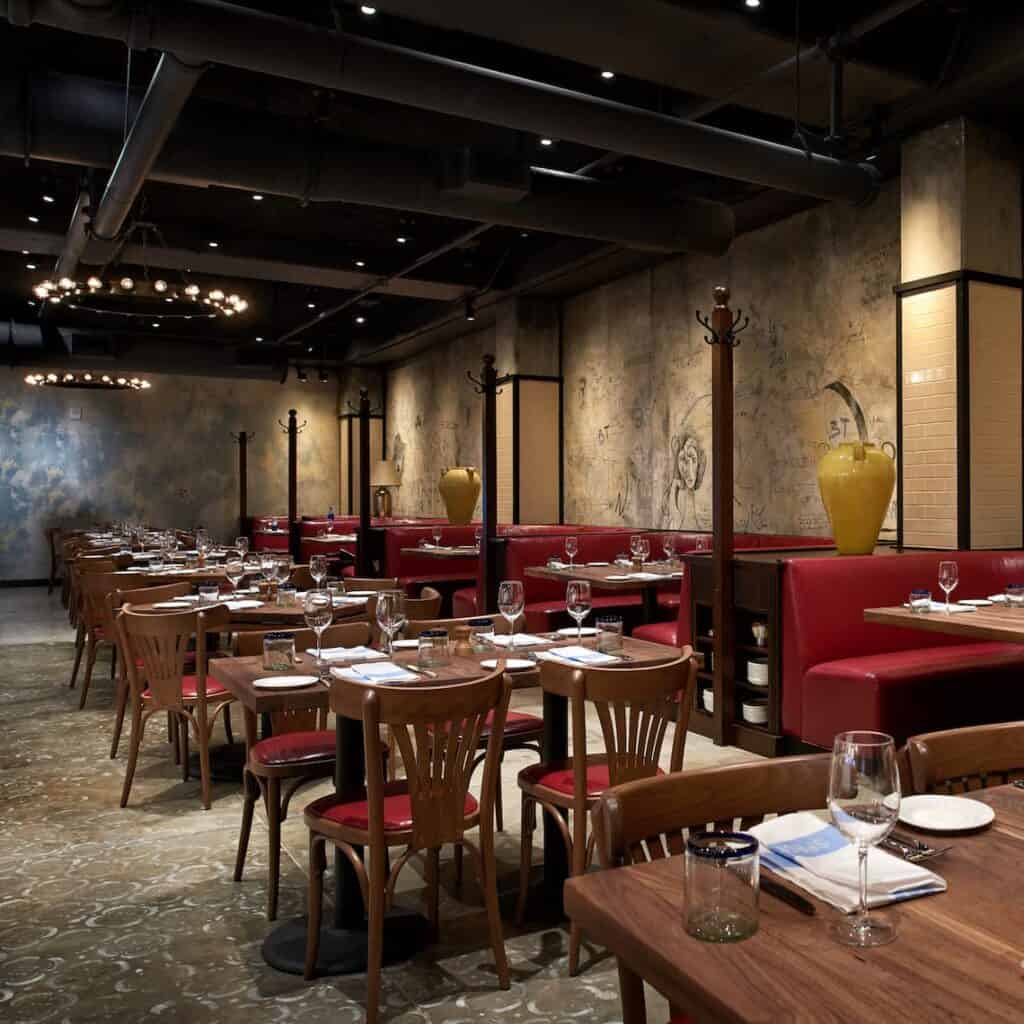 Because Enzo decided to preserve much of the preexisting speakeasy scene and only revamp it as a way to restore the operation, he made the decision to keep the original décor and callouts intact. So now, folks venturing down the dark corridors to the scene of Enzo’s Hideaway today will be treated to a blast to the past, so to speak.

Many of the same nods from back in the day keep alive that feeling of being in the 1920s. This includes all the old signage, remnants of detailed graffiti covering the walls, historical news clippings centering around Prohibition, aged flooring, and much more. 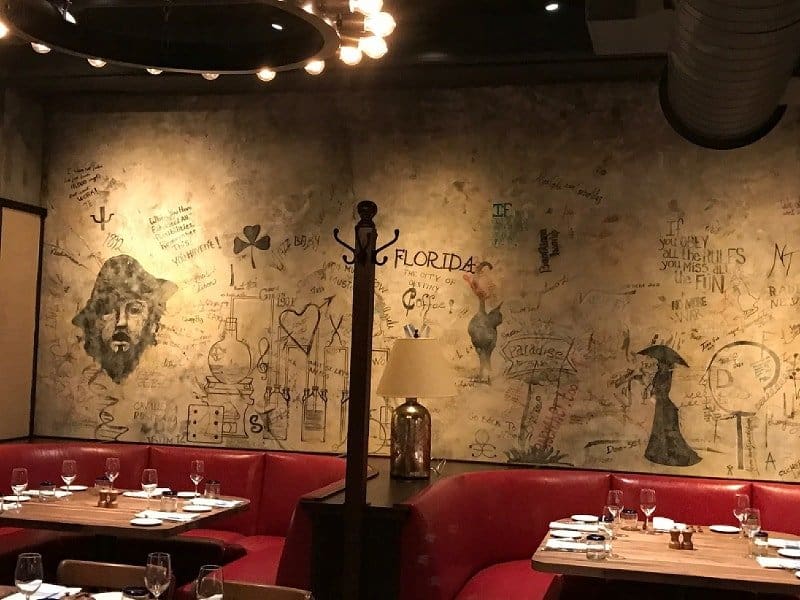 While the site served solely as a speakeasy back in the day, Enzo’s rebooting of the establishment into a lounge has made it so that Guests can come here to enjoy full table-service dining in addition to lavish libations. And the seating is varied with many different unique setups that include booths, free-standing tables, and chairs, and bar seating in addition.

Despite the gangster-like vibe you get here, it’s a pretty cozy spot that makes you feel like you’re embarking on something rather secretive and special. 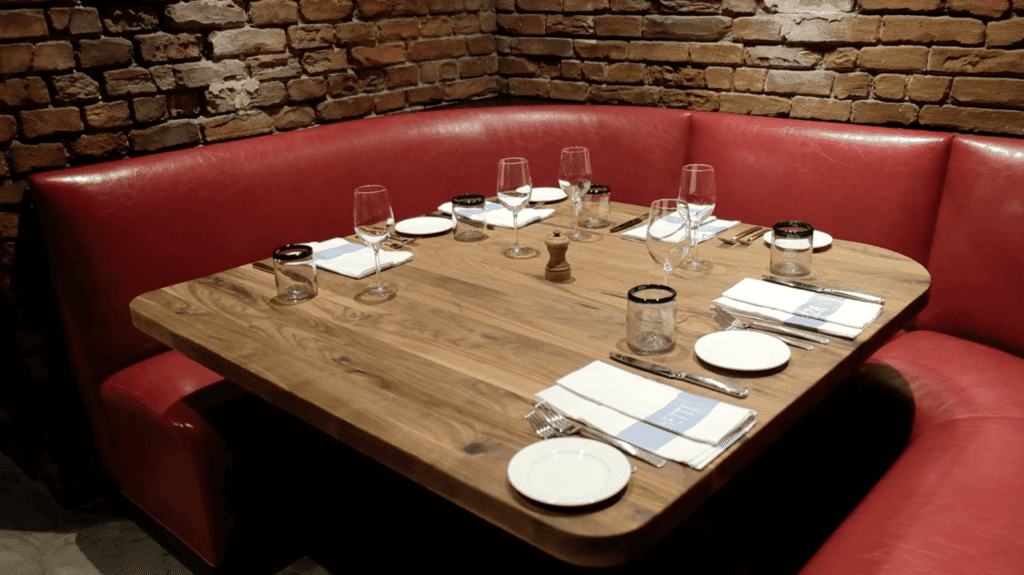 In utilizing the antiquated stash of specialty rums Enzo uncovered within the establishment during the revamping, Guests who come here today are treated to a host of barrel-aged cocktail specialties worth bragging about. In fact, Enzo’s Hideaway actually claims to offer the largest selection of scotches and rums out of any other restaurant on Disney Springs property. 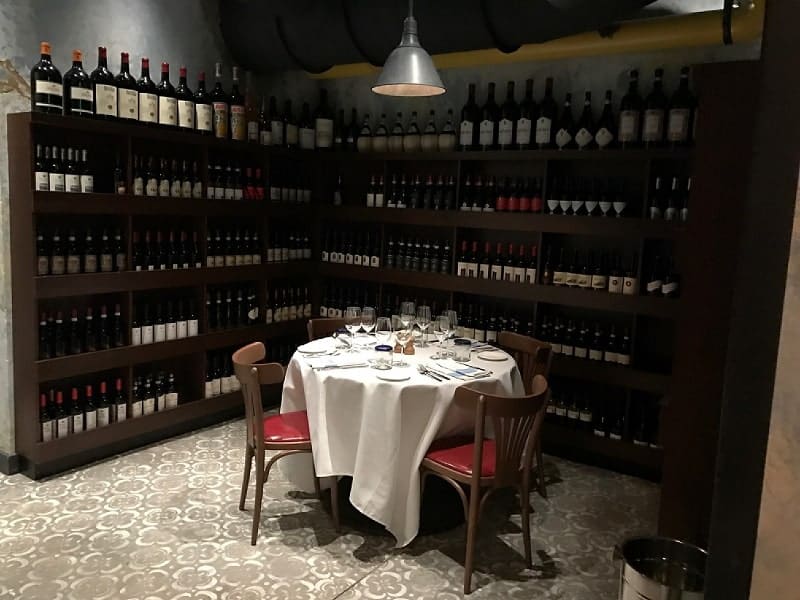 Not a big drinker? Not a problem. Enzo’s Hideaway is also known for scrounging up some enticing mocktails as well. They also offer all the usual beverages, like lemonade, soft drinks, teas, and coffees. 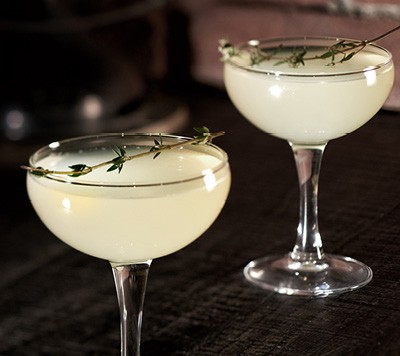 Related: The Best of the Best! Top Five Beverages at Disney Springs

More on the Menu

As we alluded to previously, Enzo’s Hideaway is more than just a glorified bar; it also happens to be a full-service restaurant. And unlike other lounges that offer limited small plate fixings and lighter bites that sometimes keep to the shadow of a larger accompanying restaurant, Enzo’s does pretty well for itself with an identity independent of that of Maria & Enzo’s.

The menu at Enzo’s offers up a robust selection of Roman-inspired rustic Italian cuisine classics that pack both flavor and variety. From traditional pasta selections to robust salads that can stand on their own (including the highly hailed Caesar Salad), salmon and steak specialties, authentic meatballs, paninis, and even a children’s menu, the enticing entrées presented here are all worthy of ovations. 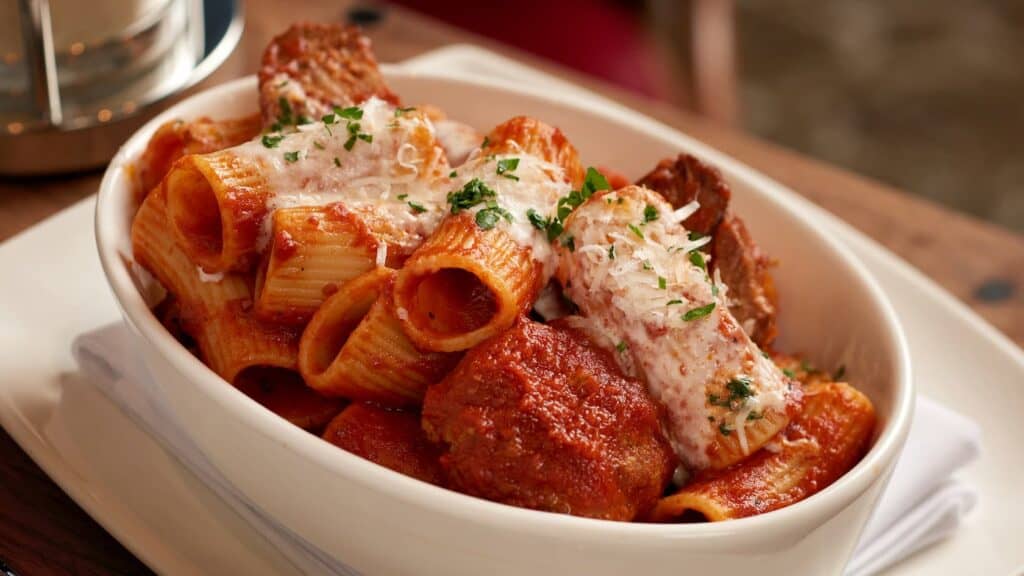 And let’s not even forget about the delectable deliverance of dessert. Enzo’s unique offerings include exquisite sendoffs like Cannoli Siciliano, Gelato, Tiramisu, Chocolate Ganache, and Torta Della Nonna. Enjoy independently or paired with a drink accompaniment, either way, it makes for the perfect opportunity to end the day on a sweet note. 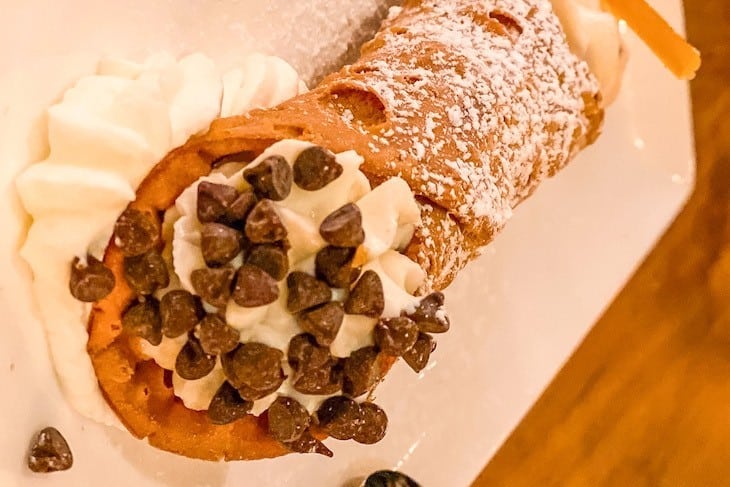 Related: A Review of Maria and Enzo’s Restaurant at Disney Springs

Enzo’s Hideaway is by no means a new establishment, yet it still remains one of Disney’s best-kept secret lounge spots. There’s just something thrilling about being a part of all the underground action and that feeling that you’re experiencing something exclusive and special meant just for you. And that’s the glowing ideal that Enzo’s Hideaway makes no attempt at hiding away from its most loyal fans.