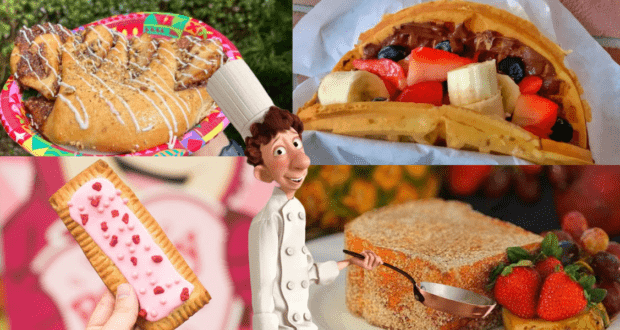 Unique Breakfast Novelties You Need to Try at Disney World

When you hear the word “breakfast” what comes to mind? If you’re like most, you probably have a list of familiar, conventional classics stacked higher than the highest stack of fluffy buttermilk pancakes. Perhaps you envision eggs, omelets, and even Eggs Benedict. Next to pancakes, there are waffles, of course. And if you happen to be visiting a Disney destination, it’s normal to see them take on a Mickey Mouse shape.

By now, it should be pretty well established that the food scene at Walt Disney World Resort goes above and beyond in every single way. From fun theming to tantalizing tastes, Disney dining is part of the overall Disney experience. And while they do of course deliver heartily on all your favorite traditions, they also boast a bountiful collaborative of novelty delights you weren’t expecting but feel the need to try. Here are 14 such examples of the most unique breakfast items to delight in while at Disney World.

Related: Where to Snag the Best Brunches at Disney World

Woody’s Lunch Box, over at Disney’s Hollywood Studios, has taken the otherwise insignificant breakfast pastry tart and created a whole new batch of novelty renditions. While some special flavor offerings change seasonally, featured favorites that are always on the menu here include their Chocolate-Hazelnut with maple fondant and candied bacon, Raspberry Tart with raspberry marmalade, strawberry fondant, and crispy pearls, and their Lemon-Blueberry with blueberry filling, frosting, and a taste of lemon. 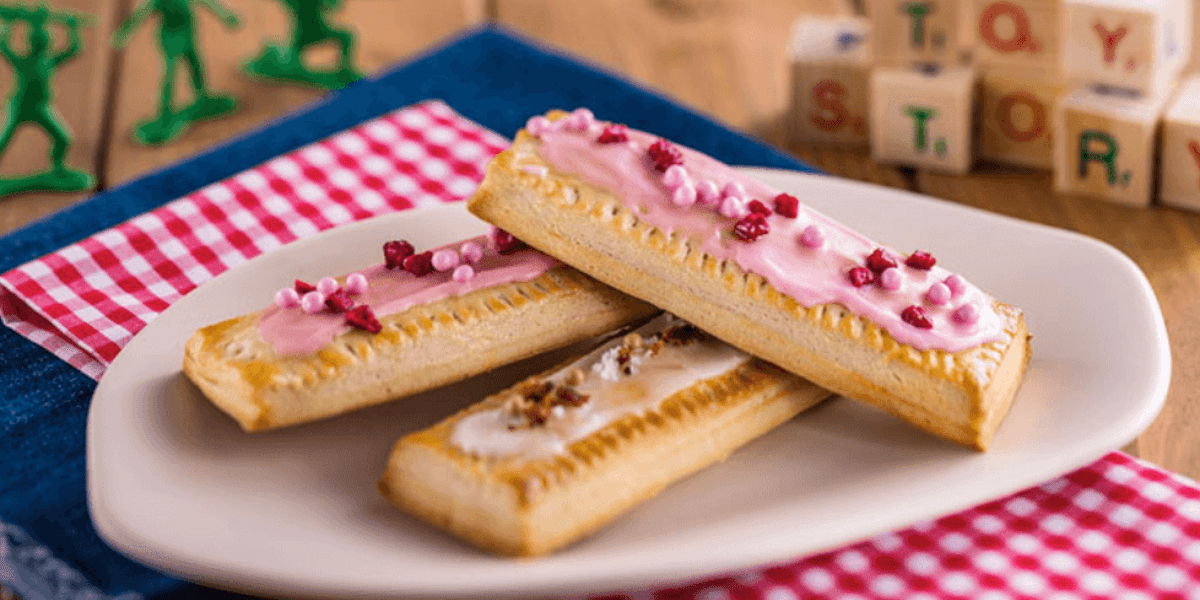 Sleepy Hollow Refreshments, at Disney’s Magic Kingdom Park, has featured their unique hit Fruit Waffle Sandwich as a long-time novelty. What it entails is a folded waffle filled with the fruity contents of berries, banana, and a chocolate-hazelnut spread.

At Disney’s Riviera Resort, there’s a stellar standout rooftop restaurant you may have heard about called Topolino’s Terrace. Every morning, as part of their Breakfast à la Art with Mickey & Friends Character meal experience, they present a host of delectable entrée features. But one of their most unique and delicious offerings is their Sour Cream Waffle, which comes as a compilation of roasted apple, Chantilly, and orange-maple syrup. You may have it served alongside the choice of smoked bacon, ham, sausage, or a special plant-based sausage. 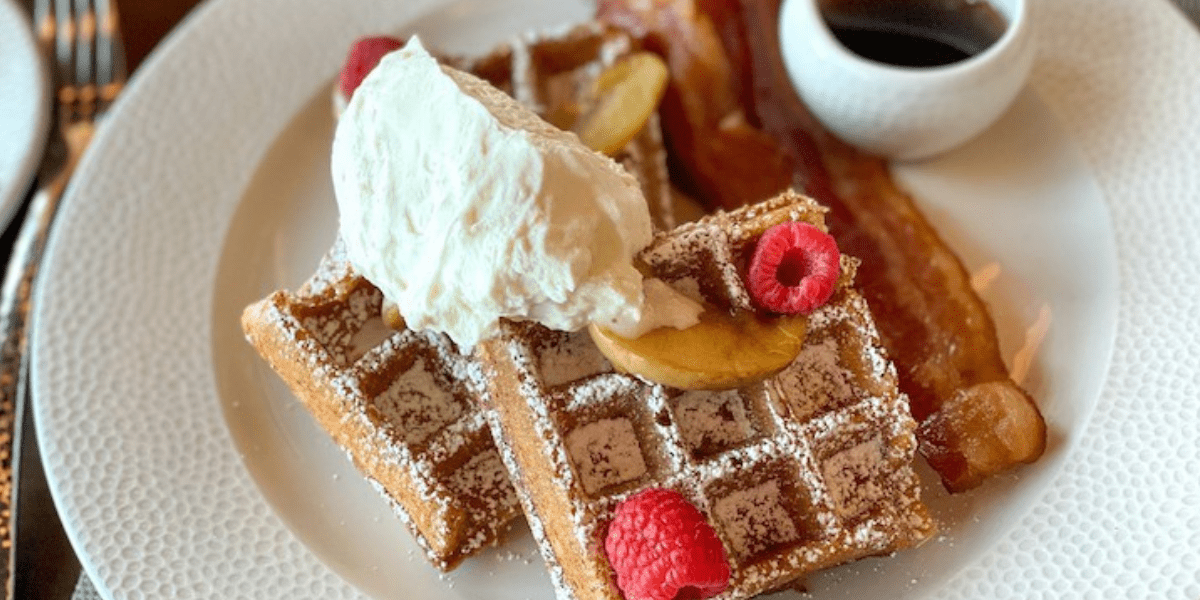 Over at Disney’s Yacht Club Resort, you’ll find that Ale & Compass Restaurant has a pretty impressive spread offered up during breakfast hours. And while there are many delectable novelties on the menu here, one of their most unique features is a chocolate-lover’s dream—the Dark Chocolate Waffle. More dessert than breakfast, the deliverance of this decadent delight comes as a chocolate waffle, of course, but also includes dried cherry compote, espresso-mascarpone cream, and chocolate shavings. You get to choose accompanying sides of either sausage or bacon.

Chef Art Smith’s Homecomin’ over in Disney Springs certainly has a reputation as a standout restaurant known for phenomenal food and house specialties. So, it should come as no surprise that celebrity chef Art Smith has scrounged up some unique spins on classic comforts, providing something original altogether. While there are many examples to choose from, it’s his Hush Puppy Benedict that garners such praise from many folks. For this feature, you get house-made hush puppy cakes, piled up with fried chicken tenders, poached eggs, griddled country ham, and pimento hollandaise.

Another hit with diners at Chef Art Smith’s is the Hallelujah Biscuit, which comes as an open-faced biscuit, loaded up with fried chicken, two over-easy eggs, pimento cheese, pecan-smoked bacon, and sawmill gravy.

Roaring Fork, over at Disney’s Wilderness Lodge, is another venue known for featuring some pretty unique breakfast items that branch away from the usual and mundane. And one of their more recent yet already hailed hits is their massive Grizzly Bear Claw. It’s not a cinnamon bun exactly, nor can it be truly defined as being anything other than a huge novelty pastry like no other. Loaded up with mixed nuts, a raisin filling, and garnished with cinnamon and sugar, this gargantuan roll is of course shaped like a bear claw and takes up an entire plate!

Cape May Café, on location at Disney’s Beach Club Resort, is known for featuring one of the best-loved all-you-can-eat Character Dining breakfasts at any Disney World Resort. You can certainly get your fill of many unique and traditional breakfast basics at the buffet station. But it’s really those Salted Caramel “Beach Buns” that come delivered to tables as a bread service of sorts that have many Guests salivating. Accompanied by delicious vanilla cream, these pull-apart bread buns come decked out with cinnamon sugary sweetness and are impossible to resist. 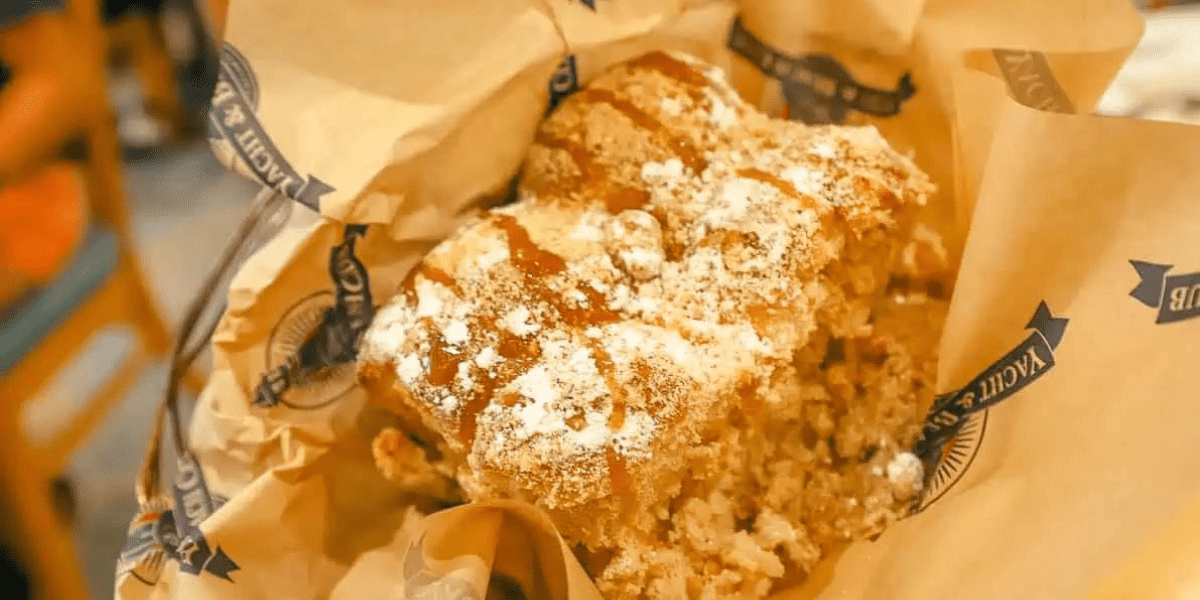 Disney’s Magic Kingdom Park is of home base to the one and only Cinderella Castle. And within the walls of this most iconic Disney Park symbol is where you will find Cinderella’s Royal Table. A must-do restaurant for many folks to stop in at, for those who come seeking out bountiful breakfast specialties, you will not be disappointed. While many of the features here deserve spotlight recognition, one of the most raved-out fan favorites is undoubtedly the Caramel Apple Stuffed French Toast. Moving beyond traditional French toast, this novelty comes packed with sweet cream cheese, spiced apple, and a drizzling of caramel sauce.

Maria & Enzo’s Ristorante is best known as an Italian restaurant making up the scene of bustling Disney Springs, and an excellent one at that. With a reputation for unique twists and novelty inclusions, they also do the seemingly unexpected of an Italian establishment in offering weekend brunch. And while they feature both breakfast-based and lunch-like specials during brunch hours, one of their fan-favored concoctions is another detour away from traditional French Toast. It is none other than their Crunch Toast, which comes as cornflake-crusted brioche bread, loaded up with chocolate-hazelnut spread, mascarpone, and strawberry compote. 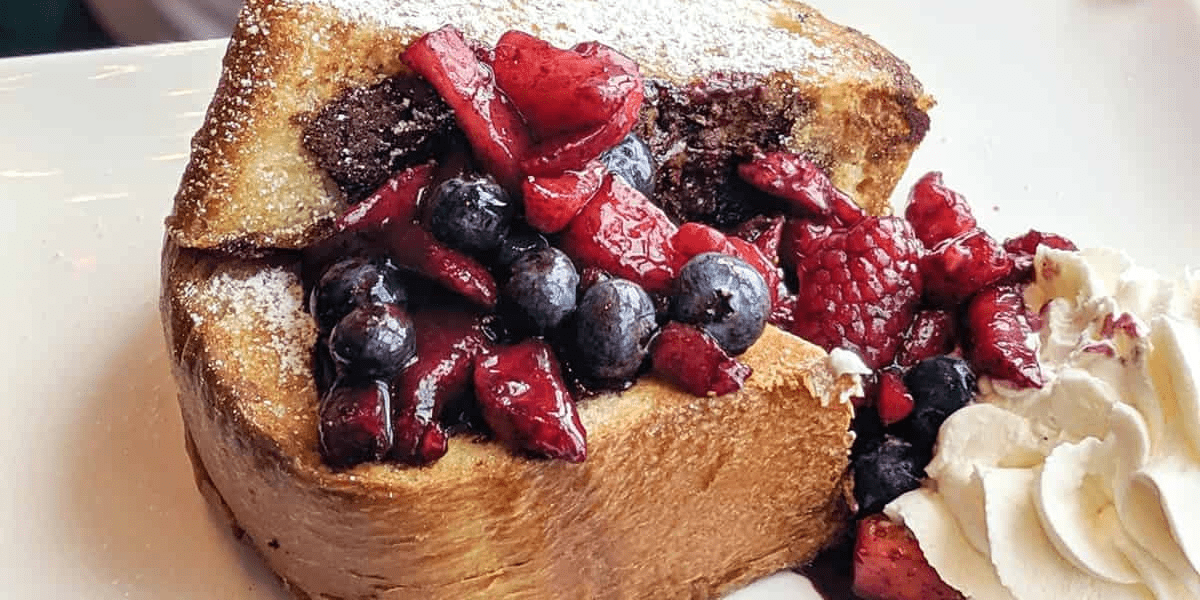 With its unique perspective of offering unrivaled views of animals roaming about just outside the window while you dine to their standout African-inspired menu specialties, Sanaa is unarguably a one-of-a-kind restaurant, on location at Disney’s Animal Kingdom Lodge. So, it should come as no surprise to find a host of novelty features on the menu offered up at breakfast time. And one such option that’s pretty popular with folks straddling the line of what is considered exotic, albeit familiar is their Shahi Tukra French Toast. The combination of saffron-scented raisins and that garnishment of whipped chai cream and almonds will assuredly send your taste buds on a most joyful flavor flight.

Chef Mickey’s at Disney’s Contemporary Resort is another well-known Character Dining spot featuring all-you-can-eat buffet hits. While there are many delights dished up during the breakfast hours, one novelty, in particular, is again a spin on French toast. It’s none other than the rightfully named Goofy’s Banana Bread French Toast. Piled up with espresso-mascarpone cream, chocolate crumbles, and toasted bananas, you will certainly go bananas (in a good way) with this pleasing presentation before you. 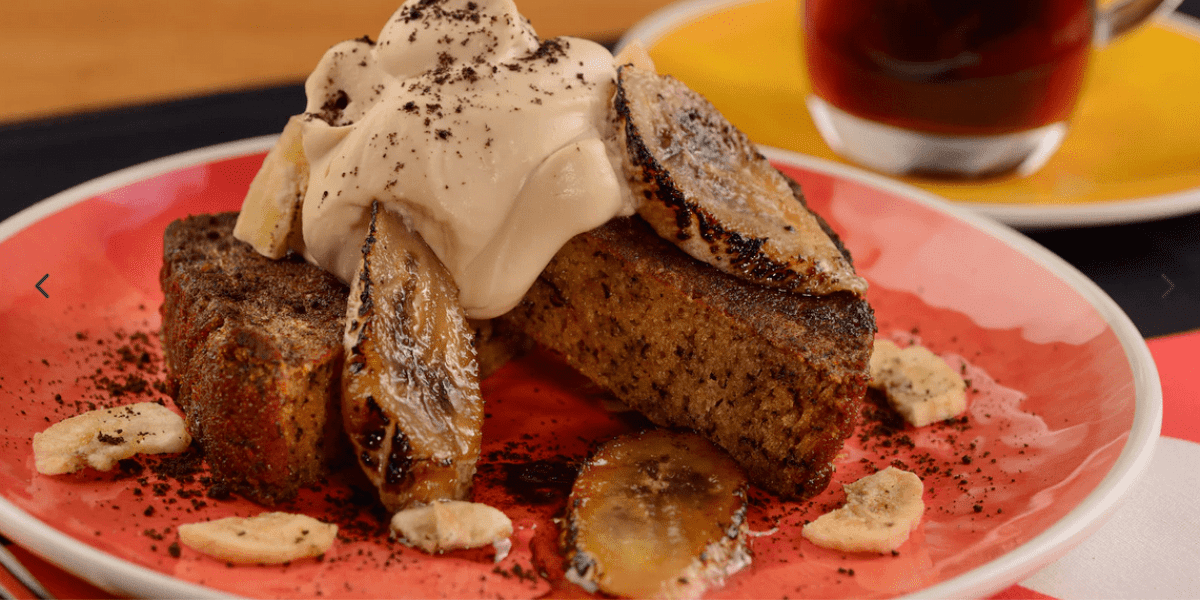 Twists of traditional French toast tend to be big on the Disney scene, and the novelty concoction of such at Trattoria al Forno at Disney’s BoardWalk is no exception. Inspired by the Italian dessert favorite of tiramisu, this rendition of French Toast does wonders by transforming cinnamon brioche as such with a crowning of mascarpone cream, cocoa powder, and an accompanying side of your choice. 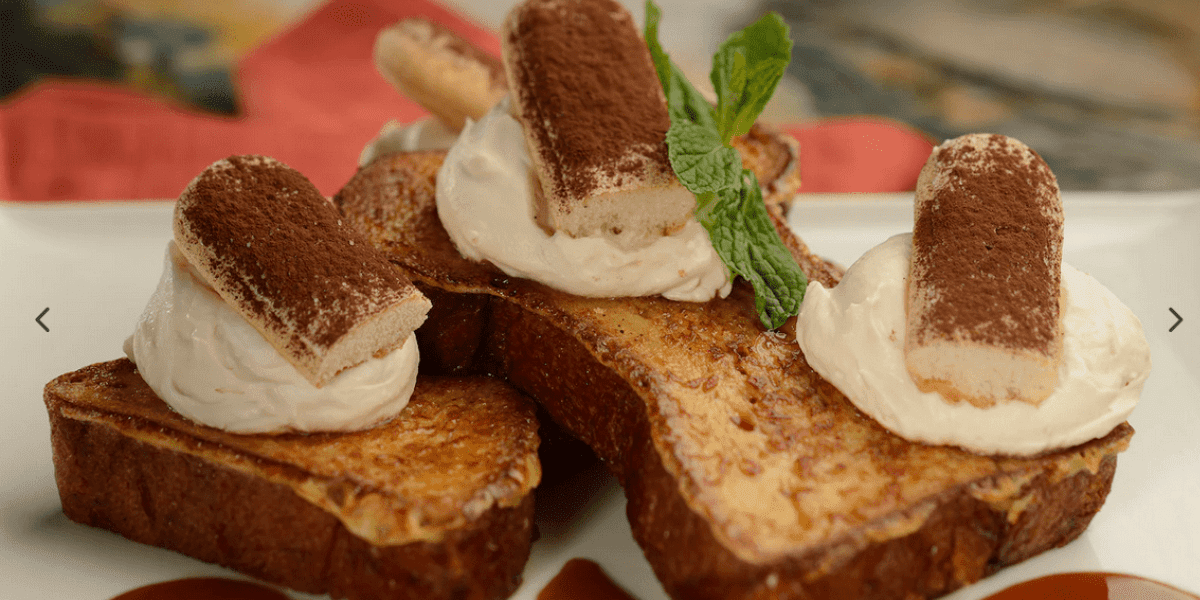 One of the most highly demanded breakfast specialties you hear mentioned time and again in all of Walt Disney World Resort is Tonga Toast. And the best place to find this uniquely coveted concoction is onsite at Disney’s Polynesian Village Resort. In fact, it’s actually served up at two onsite locations. First, there is the main quick-service favorite known as Capt. Cooks, which offers a pleasing presentation of banana-stuffed sourdough bread, battered, deep-fried, and dusted in cinnamon and sugar. Then there’s Kona Café, a sit-down table-service restaurant, which will bring you the same but also with an accompaniment of strawberry compote.

On another side note, both these locations are known for featuring other novelty island-fusion features worth trying out in addition. Their less-pubic but still stellar standout Macadamia Nut Pancakes is one such excellent example, served up with macadamia nut butter, pineapple sauce, and your choice of either ham, spiced ham, bacon, or sausage 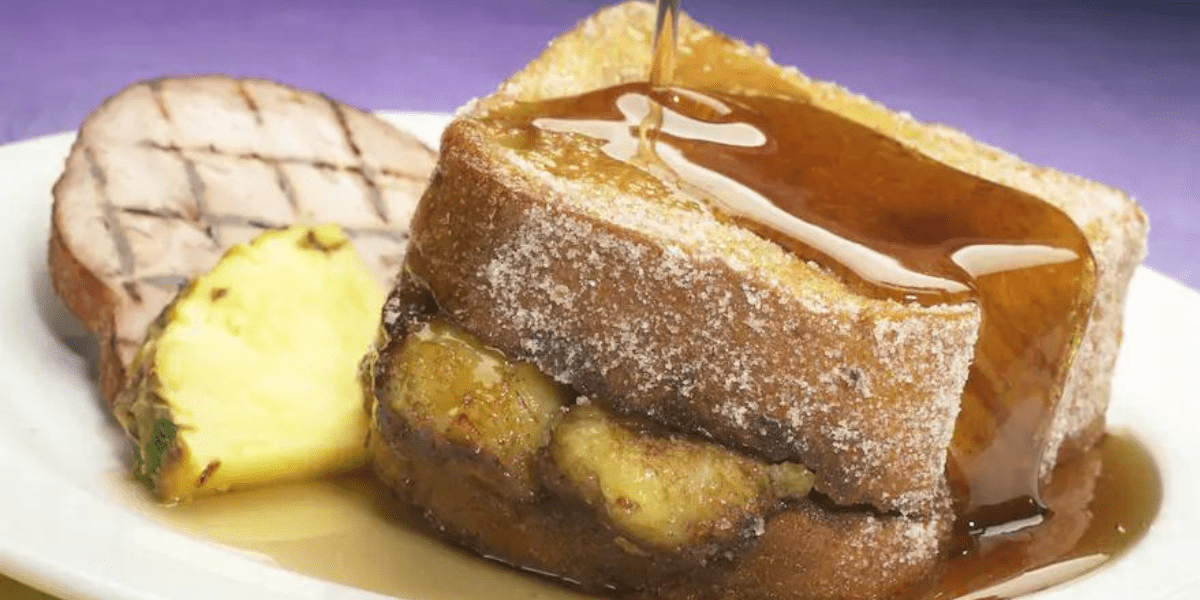 When you think about spring rolls, you don’t typically associate them with being a breakfast item (despite the word “egg” thrown in there). But there’s nothing typical about Pandora—The World of Avatar over at Disney’s Animal Kingdom Park. And with two quick-service establishments on location here, themed after a different planet no less, the Disney Culinary Team was tasked with the trying endeavor of creating a regional alien menu. But lo and behold, they’ve done remarkably well, and in doing so they even managed to come up with a unique breakfast spring roll known as Pongu Lumpia. Found on the menu at Pongu Pongu, this is essentially a spring roll filled with cream cheese and diced pineapple. It may seem small and simple, but it succeeds in being what is perhaps the most unexpected breakfast novelty feature you never imagined. 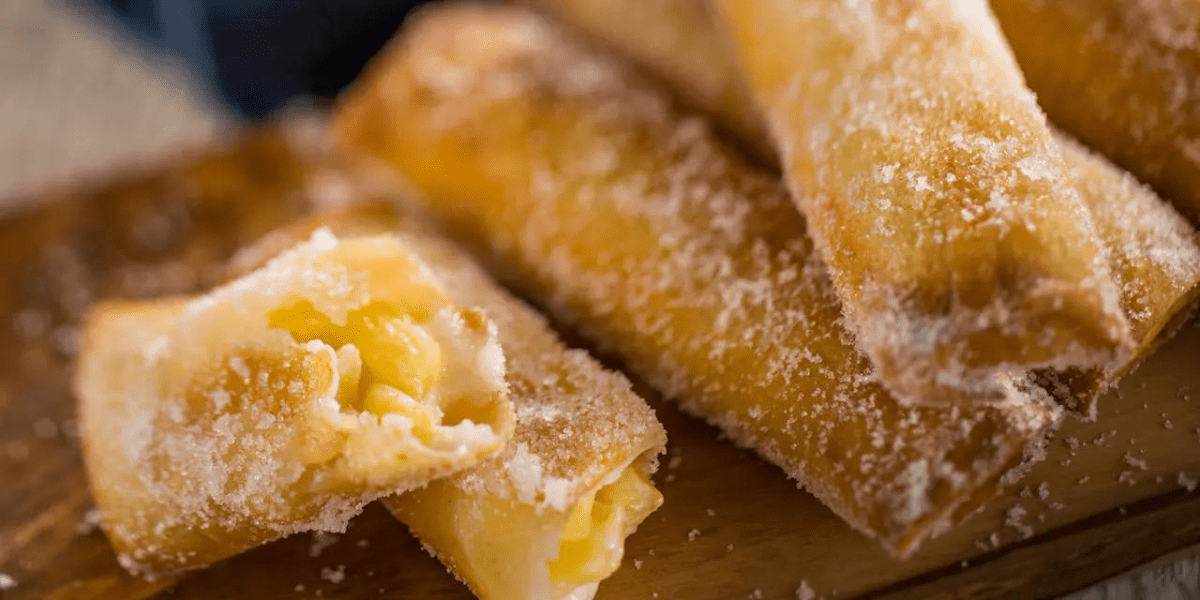 By now, you’re probably already contemplating all those never-before-tried breakfast novelties you hope to indulge in on your next trip to Disney World. And this is just a sampling of the endless delights that are really out there. And the best news of all is that Disney is forever reinventing signature selections as well as creating elaborate new concoctions to try out, meaning you’re bound to run into even more mealtime magic by the time you arrive.