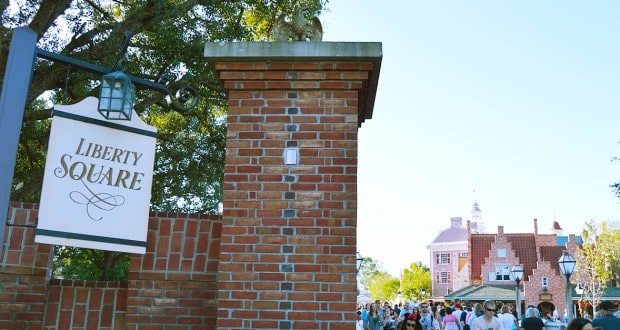 For those of you who have ever had the opportunity to visit both Disneyland Park in Anaheim, California and Walt Disney World’s Magic Kingdom Park in Orlando, Florida, you already know that the two destinations share a number of commonalities. From showcasing many of the same classic attractions to following a comparable themed layout of land designations, these two parks are undeniably the most similar to one another when compared to all other Disney Parks the world over.

Yet, despite sharing some familiar “lands” that include Adventureland, Frontierland, Fantasyland, Tomorrowland, and Main Street, U.S.A., there is one very distinct deviation, which is exclusive to each location. We are referring to Disneyland’s New Orleans Square and Disney World’s Liberty Square. Each of these squares presents a range of unique one-of-a-kind exclusives, which we are taking a closer look at in this examination of Disney’s two America-themed squares.

For the sake of seniority, we will first turn our attention to Disneyland’s New Orleans Square. Having opened to the public back in 1966, as the first land addition to Disneyland since its grand opening in 1955, the inspiration behind New Orleans Square was taken in large part from the intricate streets and architectural styles reflective of 19th century New Orleans, Louisiana. And those who have experienced the Big Easy for themselves can attest to the liveliness and authenticity instilled here, including the perpetual Mardi Gras scene and other featured reflections of the sizzling day-to-day of New Orleans in general.

Those looking to do a little shopping while out and about here have several options to check out. If you’re in search of jewelry and other unique finds then La Mascarade D’Orleans is a wonder to behold. Port Royal offers a whole range of curiosities and gifts, including fun “darker side” delights that keep with the Haunted Mansion theme. Mlle. Antoinette’s Parfumerie is an elegant place vending in specialty perfumes and glass/crystal novelties and collectibles. Another transparently delightful stop of a similar nature is Cristal d’Orleans. Then there’s the Pirates of the Caribbean-themed souvenir stop Pieces of Eight.

It goes without saying Blue Bayou Restaurant is among the most popular dining spots within New Orleans Square and by extension all of Disneyland Park. Here guests get to enjoy a fully immersive table-service meal, highlighting the very best of Creole and Cajun cuisine classics within a forever nighttime setting that adjoins the grounds of the popular Pirates of the Caribbean attraction. This isn’t the only place to grab a bite in the Square, though. Café Orleans is another known table-service favorite. Other casual, quick spot considerations on the list include Mint Julep Bar Snacks, Royal Street Veranda, and Harbour Gallery. There are also elite eats here as well, like fine dining at 21 Royal and exclusive picks within the esoteric Club 33 of legendary fame.

Related: 5 Dining Experiences You Must Have at Disneyland Resort

Disney’s iconic Pirates of the Caribbean attraction makes its home onsite within New Orleans Square. But this isn’t the only cult classic to be featured here. The infamous address to Disney’s equally popular Haunted Mansion can also be found en route. And then, there is the famed Disneyland Railroad with its New Orleans Square station.

Related: Apples and Oranges:  An Equivalence Comparison Between Disneyland and Disney World Attractions

What’s interesting about the establishment of Liberty Square at Magic Kingdom Park is that it was actually a reworking of an earlier concept intended for Disneyland Park. That’s right, Liberty Square was originally envisioned to be added as an annex to Disney’s original Main Street, U.S.A.

By the time plans for Walt Disney World Resort were being rolled out, a reimagining of the former plan saw Liberty Square as a viable alternative to recreating New Orleans Square all over again. It would also go towards helping to establish an authentic, original offering for Disney World guests. Coincidentally enough, the Bicentennial was coming up, which only renewed the sense for creating a designation truly representative of American history. So, Walt Disney Imagineering got to work, bringing to life a theme founded primarily in early colonial America, with some styles and designs in architecture portraying a minimal shifting progression through time.

Those looking to get in a little shopping at Liberty Square have two awesome options to consider. Ye Olde Christmas Shoppe is a park classic—a novelty stop where you can find a wide range of specialty holiday ornaments and décor, as well as options for personalization. Then there’s the marvelously macabre Memento Mori gift shop. Not only is this the place to get all your Haunted Mansion-themed souvenirs and gifts, but it also makes for a pleasingly peculiar place to stop and experience a couple of in-store special effects and take some chilling photographs that never lie.

Among the favored places to dine at Liberty Square is the famed family-style classic restaurant Liberty Tree Tavern. Offering up a bounty of hearty eats paired with a traditional colonial feel in the atmosphere, it’s no wonder that this restaurant comes so highly recommended. Another renowned classic table-service operation can be found at Diamond Horseshoe, which is also known to dish up the same works offered at Liberty Tree and makes for an excellent alternative. For those looking for more on-the-go conveniences, there’s the New England-style quick-service favorite Columbia Harbour House to consider. You can also seek out plenty of delicious snacks and light bites at such delightful locations as Sleepy Hallow and Liberty Square Market.

While Disney World does have its own version of the notable Pirates of the Caribbean attraction, it is not located within Liberty Square, as would be expected given the competitive commonalities both Squares adhere to. It does, however, follow suit in serving as the inhabitance for Disney World’s version of The Haunted Mansion. Another well-known attraction docked here is the one and only Liberty Square Riverboat, also known as Liberty Belle. Again, we see a deviation in the fact that Disneyland’s featured riverboat—the Mark Twain Riverboat, to be exact, is actually a Frontierland staple. But perhaps the most exclusive offering Liberty Square boasts in the way of attractions is its famed Hall of Presidents—a historical showcase of all of the nation’s presidents.

Just like snowflakes, no two Disney Parks are entirely the same. Neither are the similar offerings within each park ever identical carbon copies of one another. Perhaps that is reason enough to visit both New Orleans Square and Liberty Square for yourself. That would be the ultimate way to go if you want to experience the maximum Disney magic and originality “squared.”