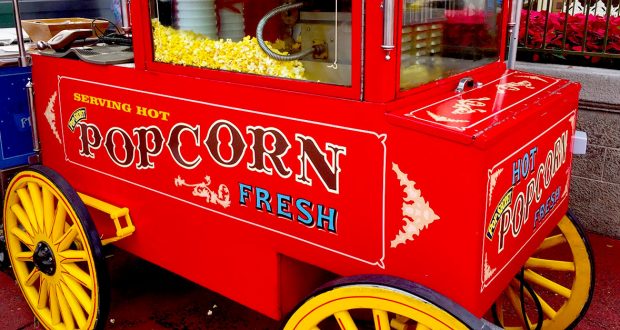 Uniquely Corny Popcorn Compilations You Can Find in Disney World

Are you one of the many inhabitants on this planet who just loves that crave-worthy creature comfort we like to call popcorn? A cult-classic snack and a true “pop” icon in the literal sense, you never need an excuse to enjoy those soft, popped-up kernels of corn, flavored to perfection via a unique topping of sorts.

Not only is popcorn among the most popular snack items to be had at Disney Park locations, but many venues present their own original flavor concoctions and exclusive specialties, as such. So get ready to take stock as we present you with some of the most versatile popcorn varieties being popped up throughout Walt Disney World.

8. Goods of the Gourmet Popcorn Cart in EPCOT

This popping favorite gourmet go-to spot, which can be found on location within EPCOT’s World Nature, has been a hit with fans for some time now, who are looking for something a little more flavorful than just the usual salt and butter rendition. The featured folly of flavors here span three charming favorites in particular, from traditional Cheddar to more esoteric hits like Buffalo Blue Cheese and Sour Cream and Chive offerings.

7. A Sweet and Savory Indulgence at Hollywood Studios

For anyone who has ever found delight in gorging on cheesy flavored popcorn in tandem with traditional caramel in those holiday tins, this prepackaged combo is just for you. Served up on location at Pixar Place’s Market in Hollywood Studios, this blend, rightfully named “Sweet and Savory,” hits all the right notes in flavorfully balancing the sweet with the savory.

Also onsite at Hollywood Studios, within Star Wars: Galaxy’s Edge specifically, you will find this popular popcorn designation. On the menu here you will see two original corny concoctions—their featured Buttered Blue Grains and their exclusive Outpost Popcorn Mix. The first one is admittedly more of a conventional take on traditional buttered popcorn. The uniqueness rests solely on its colorful appearance.

As the name suggests, it’s blue, although many will agree it looks more green than blue. The Outpost Popcorn Mix, however, is far more novel, as far as flavor and physical presentation are concerned. And it has an awesome backstory to go along with it. As it goes, Kat Saka created the unusual mix by blending together heirloom seeds from her family farm, heated in an antique popping kettle, and then blended together with imported spices collected from various other planets. The resulting, hard-to-pinpoint taste compilation is best described as salty, sweet, and spicy—somewhere along the lines of chili meets fruity.

Related: A Rainbow of Disney Snacks: 7 Colorful Treats That are Sure to Brighten Your Day

There are a number of kiosks doling out popcorn throughout Disney’s Animal Kingdom Park, but this prepackaged mix that was introduced some years back offers up a most interesting, impressive combination. For purchase at Windtraders within Pandora—The World of Avatar, it’s appropriately enough blue to symbolize the Na’vi Blue theme and delivers on a flavorful burst of blueberry mixed with almonds.

Do take note that this is neither the first nor is it the last of Disney’s unique pop-ups that are known to establish themselves throughout various locations within the parks. Some highlighted features focus specifically on certain characters or plots from Disney entertainment, while others are exclusive to a particular land or themed area, with novelty flavor offerings in par with such.

Over at the Germany Pavilion in EPCOT you will find the one and only Karamell-Küche, specializing primarily in sweet treat concoctions done up with Werther’s Original Caramel. So you can imagine that their caramel popcorn variations go above and beyond the usual, creating something exclusively scrumptious beyond compare.

Germany isn’t the only pavilion within EPCOT’s World Showcase to offer popped-up perfection with a unique flavor twist. By heading on over to Canada you will find a Mountie of a bounty awaiting you at the official Canada Popcorn Cart. It comes in the form of maple-flavored goodness saturating every kernel of their exclusive Maple Popcorn variation. You just have to try it to believe it!

In heading over to Magic Kingdom Park, you will find a vast array of sweet treat stops, including that famed Main Street Confectionary of legend. And while there are myriad prepackaged popcorn enticements for purchase here, take note of their in-house Kernel Kitchen counter. Here you have the option to customize your very own candy-popcorn mix, from a wide range of available flavors and accompaniments.

To start, you already have a profuse amount of different popcorn flavors as is, which you get to choose as your main base. Then, you select a flavored syrup or topping of your choosing. Next, add in your very own combination candies or snack bits, including M&M’s, Skittles, pretzel bits, marshmallows, nuts, cookie pieces, and so much more.

Related: The Best Snacks in the Magic Kingdom

While some may feel that prepackaged popcorn varieties aren’t as fun as kiosk concoctions, nothing can be further from the truth. Just take Disney’s Main Street Popcorn Company brand, which is served up at numerous locations throughout the parks and other Disney venues. What’s more, they have an almost boundless array of unique flavors to pick and choose from, including seasonal selections and limited-time offerings. From Sriracha Kettle Corn to “Churro” flavored, some of their top-rated examples to emerge as ongoing fan favorites include Parmesan Garlic, Maple Bacon, Confetti, Butter Toffee Almond, Birthday Cake, Caramel with Cashews and Almonds, Caramel Apple, and many, many others.

You can find popcorn being served up at a number of other venues all throughout Walt Disney World Resort in addition to what we’ve highlighted, with new locations and flavor varieties forever “popping” up. And while we’ve been primarily focused on the most intricate of corny collaborations, keep in mind that traditional butter flavor from Pop Secret is still an iconic, classic hit favored by many.

It’s also worth noting that the “butter” flavoring, which is so standard, is completely vegan, as well as free of most major allergens. So whether you want something savory served up via kiosk-style with a themed refillable Disney popcorn bucket or container, or a novel prepackaged delight, popcorn, like all things, is just better when done the Disney way.