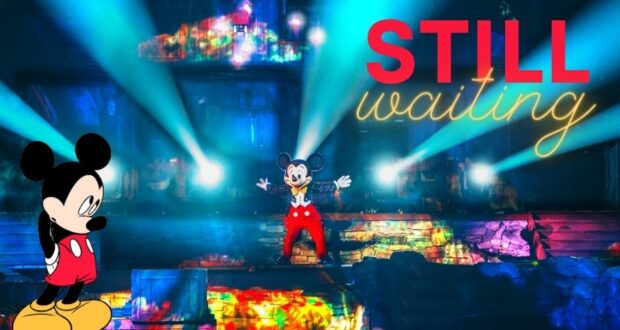 Why Is ‘Fantasmic!’ Taking SO Long to Return? Disney Provides Insight

It’s an epic battle between Disney heroes and Disney villains. Who will win? We’re ready to see the battle on a grand scale again as we eagerly await the return of the beloved nighttime spectacular, Fantasmic!. But why has the reopening of this fan-favorite entertainment taken so long? Disney provides a little insight.

As Disney Parks reopened from the COVID-19 pandemic closures, the entertainment was one piece of the magic that seemed to be hit the hardest. It took a long time before we could once again see some of the beloved entertainment which is still slowly making its return at both Walt Disney World Resort and Disneyland Resort.

While Walt Disney World announced Fantasmic! at Disney’s Hollywood Studios will be making a return in 2022, Disney World has yet to release WHEN that grand re-opening may be in 2022. On the other hand, Disneyland has announced a May 28, 2022, Fantasmic! return date.

A plethora of Disneyland nighttime experiences have recently been announced including the return of “World of Color”, Main Street Electrical Parade, and “Disneyland Forever” fireworks show – all with the return date of April 22, 2022. But, why is Fantasmic reopening so much later than the others?

Disneyland President, Ken Potrock, recently sat down for an interview with OC Register where he was asked the question, “Why is “Fantasmic” coming back later than the other nighttime spectaculars?”

Potrock provides insight for the delayed opening of Fantasmic at Disneyland saying, “It just took longer to do. We were literally installing towers as of earlier this week. It’s just a much more intricate, complex mechanical endeavor. The teams have been working extraordinarily hard. Part of it was the fact that parts and workmanship at a lot of places that were happening off property were slowed by COVID. That all fit into the production.”

As Fantasmic! prepares to return to Disneyland’s Rivers of America starting on May 28, 2022, we are seeing some progress on the Walt Disney World side of things including the amphitheater show’s lagoon recently being refilled.

Could we expect Disney World’s Fantasmic! reopening to beat out Disneyland’s? We’re keeping our fingers crossed! In the meantime, we’ll do our best to hang in there as Potrock notes, it is a very “intricate” and “complex” show that is well worth the wait.

Want to know more about Fantasmic? Disney describes the entertainment as:

“A Legendary Tale: Featuring more than 50 live performers, massive sets, stunning effects, dazzling pyrotechnics and rousing music, this larger-than-life show is painted on a grand canvas of dancing water and light like nothing you’ve ever seen. Overflowing with silly and suspenseful surprises, it will leave your entire family smiling from ear-to-ear!”

A Night When Dreams Come True: Fast asleep, Mickey Mouse dreams that he is a mighty sorcerer’s apprentice with the power to control water, color and magic. The Disney Villains—including Maleficent in the form of a towering, 40-foot-tall dragon—turn Mickey’s dream into a nightmare, but don’t underestimate the power of Mickey’s imagination!

The fantastic fantasy includes Disney Characters from some of your favorite animated classics: