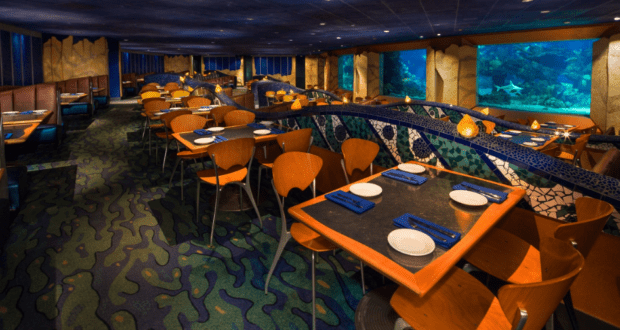 What We Love Best About Disney’s Coral Reef Restaurant

Anyone who has ever experienced the sit-down dining scene within Walt Disney World’s EPCOT knows firsthand that the Park offers what may very well be one of the most versatile collectives of uniquely themed table service restaurants all in one spot. But that isn’t too surprising considering the fact that EPCOT plays host to many different worlds in one, all of which add to the diverse patchwork and resulting medleys of different menus to browse.

From international cuisine to more familiar favorites, it’s no secret that EPCOT is a foodie’s dream come true. So, if you’re looking to reel in some sensational seafood paired with an ocean of other opportunities, look no further than EPCOT’s iconic Coral Reef Restaurant.

In hearkening back to any well-loved sea legend, EPCOT’s Coral Reef Restaurant truly has all the makings of an iconic Disney World classic. In addition to the myriad of maritime menu hits to enjoy, dining here is a deep dive into delightful other extras.

From the tantalizing tastes in cuisine classics to all of the surrounding sights to “sea,” Coral Reef Restaurant remains a fathomless favorite for a host of different reasons. Here are seven such examples of what we love best of all.

Despite being an EPCOT mainstay since 1986, EPCOT’s Coral Reef Restaurant to this day has been hailed as a “hidden gem” within the Park. That’s because it often gets overshadowed by the international food scene just across the World Showcase Lagoon. In fact, with the exception of the Garden Grill Restaurant located within The Land Pavilion, EPCOT’s dining services outside of the World Showcase tend to be thought of as primarily quick service designations in the eyes of most Guests.

As a result, the Coral Reef Restaurant is often easily overlooked, which is sad when you consider its charming presentation, unfathomable uniqueness, and convenient location directly onsite of the Seas with Nemo & Friends Pavilion. But perhaps this works well with its esoteric appeal, making it akin to an elusive sunken treasure at the bottom of the ocean.

Related: 20 Of Our Favorite Hidden Gems At Walt Disney World

6. Home to Its Namesake Coral Reef

Disney’s decision to name the restaurant “Coral Reef” didn’t come about by fishing for some creative marketing ploy to reflect a riparian theme. It was so named because it actually plays host to an actual living Caribbean coral reef.

As a fitting attribute to Disney’s massive manmade aquarium setup (which currently ranks the second largest in all of North America), the coral reef does much more than merely stand out as an oceanic ornament for diners to gaze at in awe; it also functions as the housing to a diverse array of underwater sea creatures. In total, more than 4,000 inhabitants call this place home, including close to 100 different tropical fish varieties.

Coral reefs out in the wild make up less than one percent of the ocean floor but play host to roughly 25 percent of all species of marine life. Disney is actively committed to saving natural coral reefs through both maintaining and actively improving the ecosystem as a whole via the Disney Conservation Fund.

As we alluded to previously, diners at the Coral Reef Restaurant get to experience far more than just a feast for the palate; an all-inclusive feast for the eyes also comes as part of each and every meal. Compliments of the expansive eight-foot windows looking straight into Disney’s massive aquarium, Guests get to see firsthand that vast, legendary coral reef along with its abundant aquatic inhabitants. And sometimes you even get to see alternative aquatic endeavors as they unfold.

When such services are available at Disney World, diners can even watch scuba diving in action. Another exciting experience that’s been known to occur is witnessing a scuba-diving Mickey Mouse snorkeling by the window as you dine!

While the sight of a swimming Mickey used to be far more common, now Mickey usually only dives in in honor of a special event, like a marriage proposal or other occasion. But there’s always that hoped-for prospect of lucking out by being here when such an event is playing out for fellow diners.

Related: 8 Sensational Disney Experiences You Probably Haven’t Had Yet

In addition to those massive windows peering directly into the aquarium, the restaurant exhibits an overall display of aquatic ambiance internally that’s not to be missed.

The smooth mood lighting makes the experience a tranquil one, paired with the soothing blue and green hues throughout. And then there are all those delightful decorative accents, like light fixtures shaped like marine life and so on.

The spaciousness of the Coral Reef Restaurant is done in such a way that there is multilayered seating throughout, offering up an excellent vantage point for any diners at any given time. Although, it goes without saying that direct window seating by the tank remains the number one choice with diners.

3. An Ocean of Palatable Picks to Plunge Into

The obvious choice for cuisine here is seafood, of course. From traditional well-loved classics and house novelties alike, there are plenty of picks to plunge into. Start your meal with their classic Shrimp Cocktail appetizer—a flavorful concoction comprised of traditional cocktail sauce and charred lemon.

Their Lobster Bisque, made from cream, brandy, and chervil, makes for another excellent starter. And their Seared Mahi Mahi is always a popular entrée, served up with jasmine rice, coconut and cilantro-lime sauce, and Caribbean-caught shrimp.

A novel take on classic shrimp and grits gets decked out with sautéed shrimp, cheddar, cheese grits, corn, succotash, andouille sausage, and creole spice emulsion. Then there is their ever-changing Seared Sustainable Catch of the Day, which gets served up with the chef’s seasonal risotto.

Those looking for alternate options to the seafood pickings here, take note; you can find delight in varying menu selections of a more land-based nature in addition. In fact, Coral Reef Restaurant is renowned for its 10-oz Slow-Roasted Prime Rib entrée.

The Oven-Roasted Citrus-Marinated Half Chicken is another hit. And for vegetarians and vegans, the restaurant’s own Grilled Vegetable Skewer with Impossible Kefta makes for a welcome, entirely plant-based addition.

Because many Guests like to pair a delicious dining experience with a delightfully concocted beverage, it’s also worth mentioning their extensive offerings in the way of libations. Included in the lineup are a wide range of specialty restaurant exclusives, with two of their more famous selections being the Abyss and the Coral ‘Rita. The first is a compilation of Swedka Vodka, Bardai Superior Rum, Blue Curacao, and pineapple juice. The Coral ‘Rita is a maritime margarita with Patron Tequila and Cointreau.

Be sure to save room for dessert with their many sweet sendoffs. Favorites in this category include their Key Lime Tart, Baileys Almande and Jack Daniel’s Mousse, Mixed Berry Mousse, and that unique flourless warm chocolate cake and raspberry gelato concoction better known as the Chocolate Wave.

2. Has Made Waves into Pop Culture

Despite its status in remaining a hidden gem even to this day, the Coral Reef Restaurant does have a rather unique claim to fame. It has been spotlighted as the restaurant of choice featured in many popular family sitcoms of the day. Faithful fans of ABC’s former TGIF lineup back in the 1990s may have at least vague recollections of when the Coral Reef was featured in Full House and Boy Meets World.

Back in 1993, during the Full House episode “The House Meets the Mouse Part 1” you might remember this as being the place where Danny and Vicki were dining. Three years later the restaurant resurfaced as the dining choice in the Boy Meet’s World episode “The Happiest Show on Earth.” Topanga goes to the Coral Reef to have a meal as Cory—scuba diving in the tank—floats by the window, trying to get her attention with a sign.

The Coral Reef Restaurant’s adjoining location to the Seas with Nemo & Friends Pavilion makes dining here the perfect opening to explore the many other attractions and attributes to be found onsite. In addition to seeing the aquarium from the restaurant, you can get more extensive views throughout the Pavilion via numerous alternate vantage points.

Furthermore, the Pavilion also happens to play host to its dark ride attraction namesake — The Seas with Nemo & Friends. Then there’s also Turtle Talk with Crush: a wonderful interactive theater opportunity that lets Guests carry on conversations in real-time with the famously cool sea turtle from the films Finding Nemo and Finding Dory. There’s just so much you can do here well beyond the dining scene. Perhaps that is another of the many reasons why being here is a one-of-a-kind endeavor.

Related: Fin-tastic Facts About The Seas with Nemo & Friends Pavilion

The ocean of opportunities awaiting you at both the Coral Reef Restaurant and the Seas with Nemo & Friends Pavilion is vast and versatile. The two unquestionably pair perfectly as companion experiences within an overarching experience all in one. Whether you begin your nautical niceties first with a meal at the Coral Reef, opt for it towards the end, or take a break in the middle of the action, you can’t beat dining at Disney’s Coral Reef Restaurant.