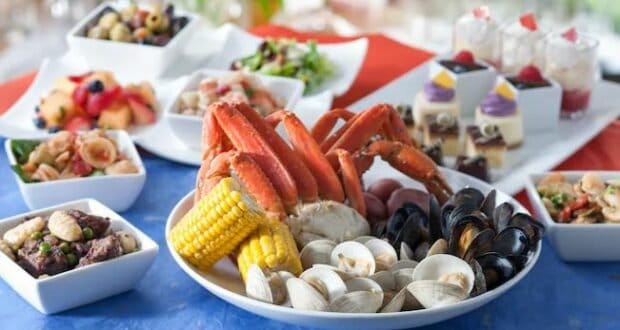 Where to Find the Most Exceptional Seafood Selections at Disney World

In observation of the season of Lent, a significantly large number of people from all around the world actively abstain from the consumption of meat products every consecutive Friday during the 40 days leading up to Easter. And with so many adherents to Lenten practices visiting Walt Disney World Resort this time of year, an upsurge in more seafood-based eating is imminent. The good news is that Disney World is renowned for its phenomenal food scene all across the board, and this of course includes an abundance of nautical niceties as well. So where can you go to find Disney’s most exceptional seafood selections? Here are 10 terrific suggestions.

Related: These Are the Best Restaurants for Seafood Lovers at Walt Disney World Right Now

The coastal New England theme of this famed quick-service eatery at Magic Kingdom Park pairs perfectly with the savory seafood selections on the menu. There are, of course, the more traditional staples, such as New England Clam Chowder, Grilled Salmon, and Grilled Shrimp Skewers along with their own version of the Lobster Roll. Another house hit is their Sea Captain Catch, which comes as fish garnished with cabbage slaw and tartar sauce, served up alongside fries.

It goes without saying that this signature dining venue over at Disney’s BoardWalk sends seafood specialties soaring to new heights. How could it not with a name like “Flying Fish”? Open nightly for dinner, you can enjoy a vast array of maritime menu medleys, beginning with satisfying starters like their house Lobster Bisque or Prince Edward Island Mussels in Chardonnay broth with fresh herbs. There’s also their Shrimp Cocktail feature, which comes as compilation of blood orange, horseradish, and sea salt. Entrée enticements vary from their versatile Verlasso Salmon to Planch-seared Scallops, and other novelties, including their savory Seafood Pearl Pasta and praise-worthy Potato-wrapped Red Snapper. Enhancements are also available to top off any dish, including grilled octopus, seared scallops, sautéed shrimp, and even cold-water lobster tail.

This next recommendation gets back to the basics of a good old fish fry. It’s also a knockout any time of year for those looking to experience the classic Brit rendition of iconic fish and chips. You’ll find this quick and convenient counter-service stop rightfully located within EPCOT’s United Kingdom Pavilion.

If you are the ultimate seafood lover then this seafood-laden buffet setup at Disney’s Beach Club Resort is your ultimate dream come true. Inspired by coastal New England, the restaurant offers up two enticing all-you-can-eat options; one is presented as a bountiful breakfast featuring all the classics, with nighttime operations providing a delectable deep dive into surf (and turf) specialties galore. They even boast a Classic Seafood Boil of steamed clams, mussels, shrimp, corn, and potatoes. A freshly offered Sustainable Catch of the Day feature is also a part of every dinnertime occasion.

Related: The Breakfast Buffet is Returning to Disney’s Cape May Cafe, But Where Are the Characters?

Not far off from the aforementioned suggestion is this casual table-service pick, which also follows suit with the New England coastal theming and maritime menu presentation. Open around the clock, this is an excellent establishment offering a broad range of succulent seafood enticements. Start off with their house-made Jumbo Lump Crab Cake or specialty Lobster and Corn Chowder. Dinner also presents Roasted Garlic Shrimp that comes with focaccia. Favored lunch hits include a classic offering of Fish & Chips with house-made vinegar chips and lemon caper tartar sauce, Blackened Sustainable Fish Tacos, and a Smoked Salmon and Toasted Bagel Sandwich. Dinnertime delights include Pappardelle Pasta with Shrimp, their Sustainable Catch of the Day, and novelty New England Seafood Pot Pie.

While technically not a Disney Restaurant in the most literal sense, this signature sushi establishment makes its home at the Walt Disney World Dolphin Resort, which is an unofficial honorary Disney Resort in the eyes of many. And if you are an avid fan of sushi, this is the place to come. They have a profoundly profuse array of everything, from raw sushi to cooked sushi and sushi rolls both raw and cooked. And we can’t forget to mention the many other seafood alternatives to be found here that aren’t sushi selections at all. Some of the most contested options in this latter category include Cucumber Squid Salad, Tempura Udon Soup, Panko Softshell Crab, Seared Tuna, Cod Katsu, Hamachi Kama, and many others.

Experience the ultimate upscale seafood dining experience onsite within Disney Springs at this establishment that lives up to its name and reputation in more ways than one. While serving as a classy coastal-themed vintage venue, it caters to entire families and even offers onsite shopping and one-of-a-kind Amphicar boat tours out on the water. But in getting back to the mouthwatering maritime medleys to delve into, The Boathouse has plenty of palatable presentations worth noting. At their raw bar you can delight in such selections as Oysters on the Half Shell, Yellowfin Tuna Poke, and even Wild Caught Sea of Cortez Shrimp. Fresh market fish options include Coriander-seared Ahi Tuna, Cedar Planked Gulf of Maine Salmon, and Gulf of Mexico Red Grouper. And that’s only the beginning of a seemingly fathomless featuring of other nautical eats in addition.

What can be more regally riparian than elegant dining aboard a permanently-docked luxury paddleboat? With a longtime presence predating its current fame as a signature dining venue, the history of Paddlefish Restaurant has always been linked with serving up seafood even during former operations. And the tradition continues with a wide range of tantalizing menu features. Starting off with their Crab Cake, Crab-Topped Fries, or Calamari makes the perfect prelude to any scrumptious meal. Other notable beginnings include their New England Clam Chowder or one of any available salads that are all customizable by adding shrimp and/or salmon. Other ovation-worthy options in regards to their featured entrées include Stuffed Cod, Catfish, Salmon, Shrimp Pasta, Ahi Poke, Crab Ceviche, Whole Maine Lobster, Crab, and countless others.

This unique full-service dining venue, housed within EPCOT’s The Seas with Nemo & Friends Pavilion, is the absolute epitome of all spectacular seafood dining at Walt Disney World. And it is very likely the first one to come to the minds of many when people generally consider Disney’s great seafood scene. Intimately themed as an underwater setting, the spacious windows all throughout the dining room allow for diners to be surrounded by Disney’s large, resident coral reef, teaming with life from the more than 2,000 sea creatures who inhabit it. And what better way to enjoy an all-immersive deep-sea dining dive than to plunge your palate into equally evolved depths of flavor and theme? Some of their most contested menu favorites include their house Lobster Bisque, Shrimp Cocktail, Seared Mahi Mahi, and Seared Sustainable Salmon.

There are many other venues around Walt Disney World Resort known for delivering on exceptional seafood selections. There are also various seafood specials, in light of Lent, currently being offered at venues that are not necessarily known as seafood-specific. Whether you are observing Lenten practices yourself or just happen to be a fan of seafood in particular, there’s no better time than now to explore the ocean of options awaiting you.