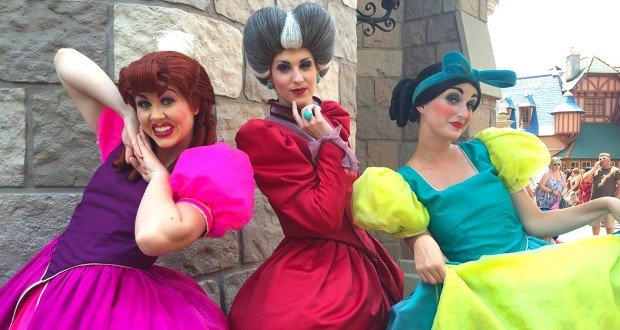 10 Inscrutable Requirements Of Being A Disney ‘Face’ Character

It probably comes as no surprise to any true Disney fanatic that among companies that present live entertainment, Disney is one of the largest in the world. The numerous live shows in the parks and resorts, on the cruise ships, and at special events around the globe entertain millions of guests each year. Naturally, with that many shows comes the need for thousands of talented Cast Members. Some of the most important live entertainment roles in the Disney parks are the characters that delight children at meet and greets or at character meals, in addition to performing in parades and shows. Disney characters can be broken down into two primary areas – costume characters and face characters. Face characters are those cast members who dress up in costumes that allow you to see their faces. These include such characters as Ariel, Belle, Cinderella, Tinker Bell, the Mad Hatter, Gaston, Prince Charming, Peter Pan, Mary Poppins, and Jack Sparrow. Here are some of the demanding requirements of being a face character at the Disney parks.

Every live performer goes through an audition process, which can be very intimidating. Auditions can be held in cities around the country or around the world depending on which park is doing the hiring. This often requires Disney hopefuls to travel for many hours to get to the audition city, and for some the audition is over in a matter of minutes. You have very little time to make the right impression, and you won’t know exactly what it is that the Disney Casting Director is looking for.

One characteristic that seems to be in great demand at Disney auditions is strong movement ability. The reason for this is fairly straightforward – you must have the ability to carry yourself and take on the mannerisms of the character that you are portraying. Many hopefuls who have gone to auditions have noted online that the candidates who have some dance experience or can move gracefully tend to make it past the first round more often than those without those abilities.

Naturally, if you’re going to be a character you need to go where they’re needed. In the U.S. that means moving to Anaheim or Orlando. And unless you are part of the Disney College Program, you’re going to have to find your own accommodations. Since many of the characters are portrayed by young adults in their late teens or early twenties who don’t have a lot of experience living on their own, this can be a daunting task. You’re away from the support of your family and friends, and while it only takes a matter of days to start making friends among your many fellow Cast Members, it can be a little overwhelming.

Despite the fact that characters are an integral part of the Disney experience and good talent is always needed, the compensation that Cast Members receive for filling these roles is not the highest. However, the Disney benefits package tends to be pretty good, with insurance and stock options available. And no one can deny that the Disney perks are probably better than you’ll find at any other company in the world, since they include free park admission and discounts on Disney resort stays and merchandise. But the wages continue to be one of the negatives of working at Disney.

6. The Right Height and Size

If you are a female Cast Member standing 5’ 8” tall, you will never be asked to play Tinker Bell. Part of having consistency of appearance in face characters from one Cast Member to another is making sure that fairies and princesses are more petite, while villains and princes are taller. And since the princesses dress sizes don’t come any larger than a small size 10 (or size 12 depending on the park), curvier Cast Members aren’t the right fit, so to speak. And as anyone who’s seen videos of Gaston in the parks can attest, if you’re chosen to portray this role it’s best if you’re in good physical shape!

While no one can expect a Cast Member to look exactly like a cartoon, Disney face characters must nonetheless be similar in appearance to the characters that they are portraying. This could mean having the “right” cheekbones or a similarly shaped face. This also means you can have no distinct features that would be noticed from one day to the next by an observant young guest, such as a mole, scar, or large gap in the teeth.

Not only must a Cast Member have the correct size and look for a particular face character, they must also have the voice and mannerisms to match. Cast Members watch their character’s movie many times in order to learn the proper dialect, pitch, and timbre of their voices in addition to their speaking style and mannerisms.

Guests have been known to come up with extremely complex questions regarding their favorite Disney characters. In addition to watching their character’s movie to learn their sound, Cast Members must be able to answer questions regarding their character and their movie, and to do so quickly. If Anna or Elsa is asked where Olaf is, the Cast Member must be ready with a plausible answer. (“He’s playing with Sven”, for example.) Further, face characters must know when they shouldn’t answer a question, such as when a guest asks about a character outside the realm of Disney. And this is all in addition to learning how to sign an autograph that is consistent from Cast Member to Cast Member and that stands the test of time.

That endurance is needed by the Cast Members portraying face characters is a huge understatement. There are a lot of things that the characters have to endure, such as heavy makeup, uncomfortable clothing, and hot and humid weather, all while maintaining high energy and keeping good rhythm. Merely making it through a shift can be a trial in perseverance.

As much as the Cast Members portraying the face characters enjoy making the dreams of young Disney guests come true – and they really do – a lot of guest interaction is downright rude or even violent. Some adult guests seem to desire nothing more than shattering the illusion for the kids around them, asking questions such as why they saw the same character across the park just minutes earlier. Other guests inexplicably seem to want to start a fight with a character, going so far as to punch or kick them. And some guests can become downright creepy with how fixated they become by a character or by the innuendo they give while standing next to them for a picture. Face characters must take these things in stride, respond appropriately, and carry on.

Despite the many complicated requirements of being a Disney face character, the majority of Cast Members who portray them tend to come out of the character department with fond memories of the delight that they were able to share with the guests. If you had your choice, which character would you like to portray in the Disney Parks?

Consider planning and booking your next Disney trip with an Authorized Disney Vacation Planner you can trust like Mickey Travels. They’ll help you get the best Walt Disney World deal, share expert advice and their services are totally FREE! It’s genius!