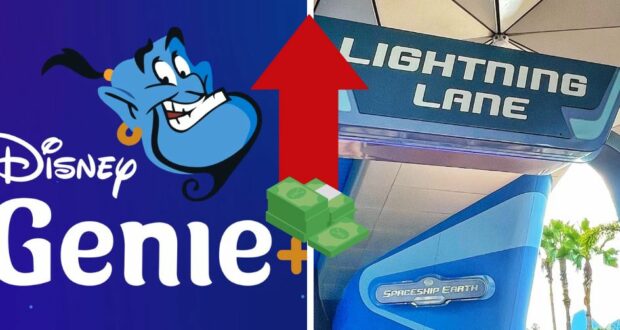 The Walt Disney Company and the Disney Parks are wasting no time when it comes to implementing the plans that were revealed yesterday involving increasing the Genie+ prices — but apparently, they have also increased Individual Lightning Lane prices, too!

We learned yesterday, October 11, that the price of Genie+ was increasing and that what journalist Ashley Carter calls “variable pricing” is being put in place. This means that the price of Genie+ per person (plus tax) is liable to change every day. Disney Fanatics and frequent Disney Park Guests were already complaining about rising Disney prices and the rising cost of a Disney vacation, so this news was generally met with negative reactions.

For today (Oct. 12), Disney Genie+ at Disney World is priced at $20 per person plus tax. Disney recently implemented variable pricing for the service. pic.twitter.com/ghqKyP3vxg

However, Disney is not done with the price increases! Even as Genie+ has increased in price and Disneyland ticket prices have increased this week (with Disneyland tickets becoming 8 percent, 9 percent, and even 11 percent more expensive), Disney has started to increase the prices per person in another category: Individual Lightning Lanes.

Take a look at the cost of rides like Star Wars: Rise of the Resistance, Flight of Passage, and Guardians of the Galaxy: Cosmic Rewind in the Tweet below from journalist Scott Gustin! These rides have all faced price increases. For example, Rise of the Resistance has increased from $15 to $20, and Flight of Passage costs have increased from $11 to $14. This might only sound like a few dollars, but when you’re visiting with other people like family members, those prices add up!

The price of two Star Wars experiences has also increased, although this increase was done very quietly.

Disney Guests were already displeased with Genie+ and the overall Disney Genie service, especially in comparison to its predecessor (which was called Fastpass).

Now that the prices for Disney Genie services like the Individual Lightning Lane are varying — but with a specific focus on leaning towards higher prices, not lower ones — it seems like Disney fans will be even more discontented with the entire Disney Genie service, not just Genie+ and the special access to PhotoPass services and certain Disney attractions that the add-on service brings to the table.

Do you think that these Individual Lightning Lane and Genie+ prices are exorbitant, and that Disney Parks and the Walt Disney Company are making everything too confusing for their Guests and Disney vacation customers?