A Look Back at Presidential Moments at Disney Parks

Presidential visits to Disney parks have been taking place in one form or another since the opening of Disneyland. Presidents and Vice Presidents have held a number of press conferences and speeches at Disney Parks over the years, but they have also visited with their own families, hosted TV specials, and even helped Cast Members and Walt Disney himself celebrate new attractions. In this post, we’re taking a quick look back at Presidential moments from history at Disney Parks:

Ronald Reagan and the Opening of Disneyland (1955) 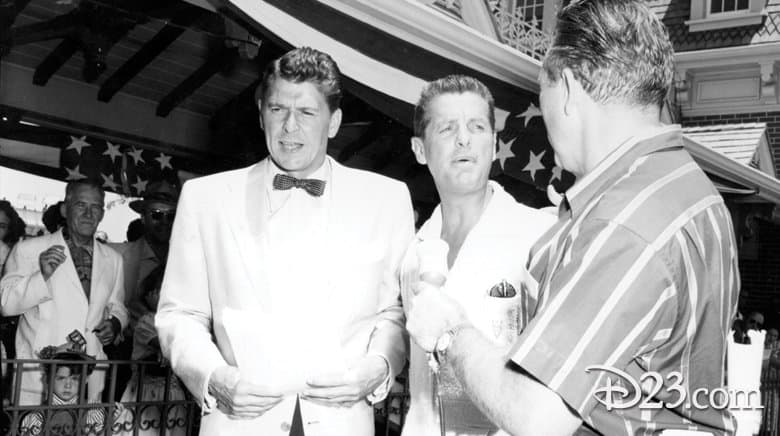 The opening special for Disneyland Park is one of the most memorable pop culture moments in the early history of television. At the time that the finishing touches were being put on Disneyland prior to its July 1955 opening, Ronald Reagan was still widely known for his acting as he was still just beginning to enter the political world.

At the time, he was working as the host of the General Electric Theater, a TV program where he toured various sites across the U.S. giving speeches as a GE spokesperson. In the years prior to and immediately following the opening of Disneyland, he also began supporting political campaigns as a Democrat (he did not register with the Republican party until 1962), with one notable campaign in support of the re-election of President Eisenhower.

For the opening of Disneyland on July 17, 1955, Reagan hosted the live televised Dateline Disneyland special on ABC alongside actor Bob Cummings and radio and TV personality Art Linkletter. Later during Reagan’s presidency, the three reunited at Disneyland to host the celebrations of the park’s 35th anniversary in 1990.

Later, in 1983, Reagan visited EPCOT to meet with the first round of international students who were working in World Showcase. Then in 1985, Reagan’s inaugural festivities took place in EPCOT when Washington D.C. was too cold for the outdoor event, making this Walt Disney World event one of the few times an inaugural celebration took place outside of D.C. 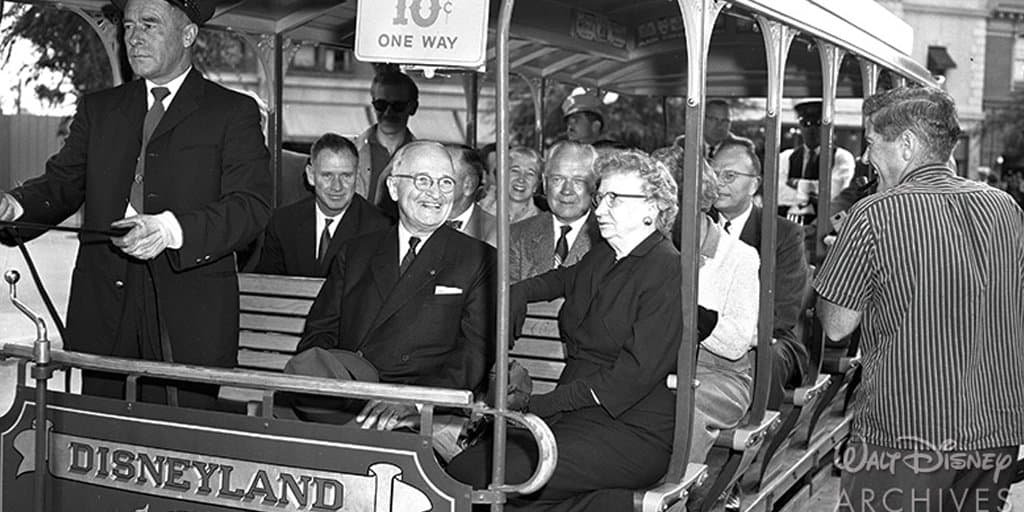 Harry S. Truman was the first president to spend a day at a Disney Park with his family, kicking off a tradition that would span most U.S. Presidents with the exception of Lyndon B. Johnson and Donald Trump. The Truman Family spent a day at Disneyland in 1957, where much of his visit did not garner much attention from the press until it came time to ponder riding a classic Fantasyland attraction– A devoted Democrat, Truman jokingly refused to ride Dumbo the Flying Elephant as the elephant is the symbol of the Republican party. 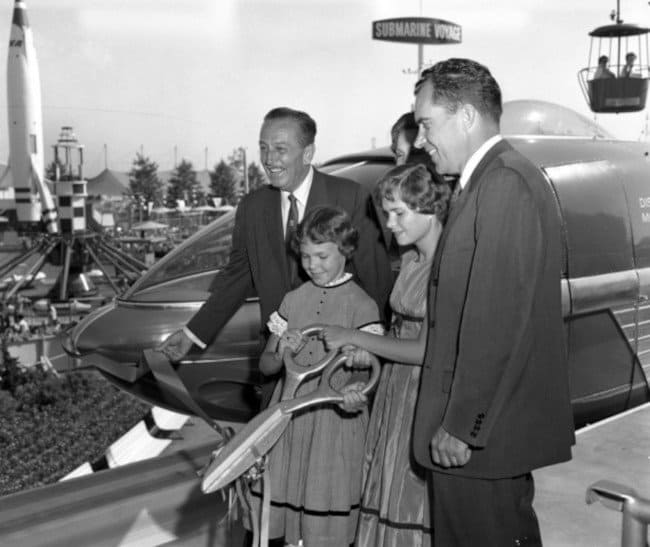 The first major expansion completed at Disneyland came with a number of new attractions and concepts that set the tone for the later development of Disney parks around the world. On July 14, 1959, an expanded area of the park opened introducing Guests to the Disneyland-Alweg Monorail System, Matterhorn Bobsleds, and the Submarine Voyage, which remain among the most iconic Disneyland attractions today.

The expansion would also introduce a new concept for the park, that would be continued at least in theme park terminology long after the physical item’s relevancy, the E-Ticket.

Richard Nixon, who was then Vice President to Eisenhower, and his family were invited to attend the opening of the park’s expansion by Walt Disney. (Nixon also visited Disneyland with his family the year the park opened.) Art Linkletter returned for the opening ceremonies of the expansion, too, and ahead of press coverage for the event, two different photoshoots were done of the Nixon family officially opening the Disneyland monorail.

Some photos were taken in the morning so they could be sent out to members of the press who were not onsite covering the event, and later photos were taken again of the real-time dedication. (If you happen to be diving into Disney Parks’ history and come across photos from the event with Nixon wearing two different outfits, that’s the reason!)

Of course, Walt Disney World fans may be aware of Nixon’s more infamous appearance at the East Coast Disney park. In 1973, Nixon’s televised conference during the Watergate scandal in which the president states, “I am not a crook,” actually took place in one of the convention spaces at Disney’s Contemporary Resort. 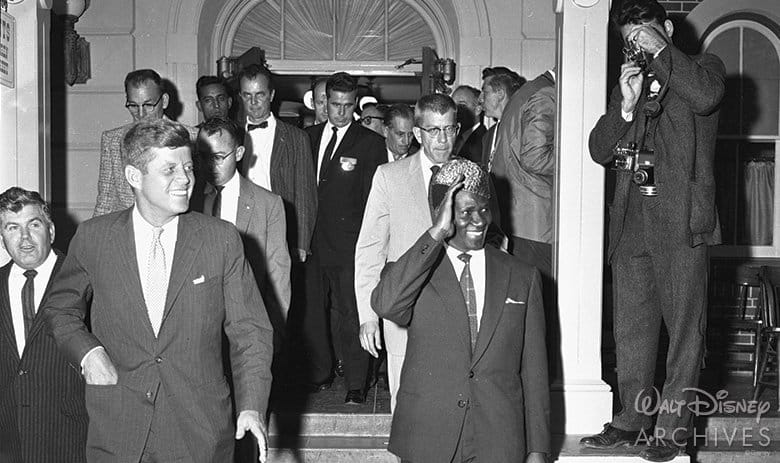 In November of 1959, Senator Kennedy visited Disneyland Park after a meeting at the Disneyland Hotel with Ahmed Sékou Touré, then President of Guinea. While his visit to Disneyland was largely uneventful, Kennedy’s connection to Disney Parks really comes later following his assassination on November 22, 1963.

Disneyland closed the following day, on November 23, 1963, marking the first time the park had closed for a full day since opening. The following month when Candlelight Processional returned to the park, the President was honored with a moment of silence.

While Kennedy passed before the opening of Walt Disney World, there are still a couple of connections to him at the Orlando park. One is that Walt Disney found the land that would become Walt Disney World while flying in his personal plane over the site on the day of Kennedy’s assassination. The news of course did not make it to him on the plane at the time, but he learned what had happened when the plane stopped to refuel. And, today, Guests can see Kennedy in two attractions at Walt Disney World, in the Hall of Presidents at the Magic Kingdom, and in the “Golden Dream” film sequence at the American Adventure show in EPCOT. 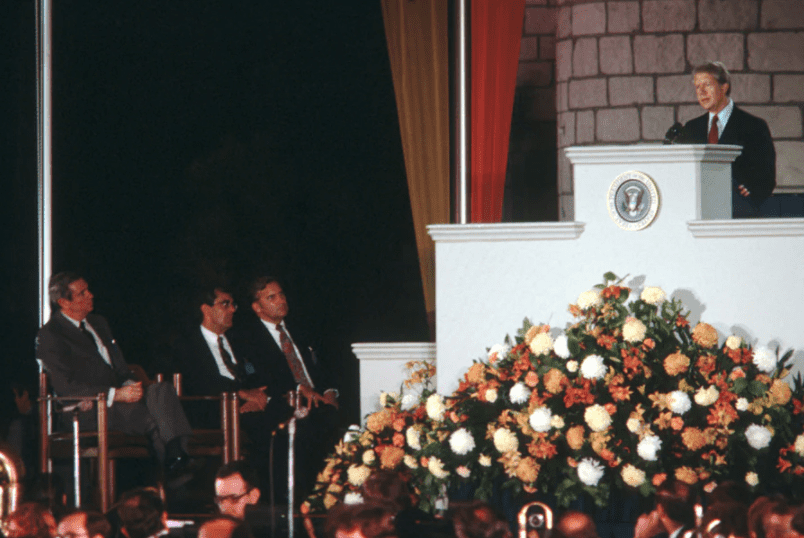 During Jimmy Carter’s administration, the president spoke at the 26th World Congress of the International Chamber of Commerce in the organization’s event that was held at the Magic Kingdom. His speech took place in front of Cinderella Castle while the park was closed to day Guests for the meeting. Later, in 1980, Carter issue a proclamation in honor of Walt Disney’s memory and his impact of bringing “laughter and love, joy and gladness” to audiences around the world. 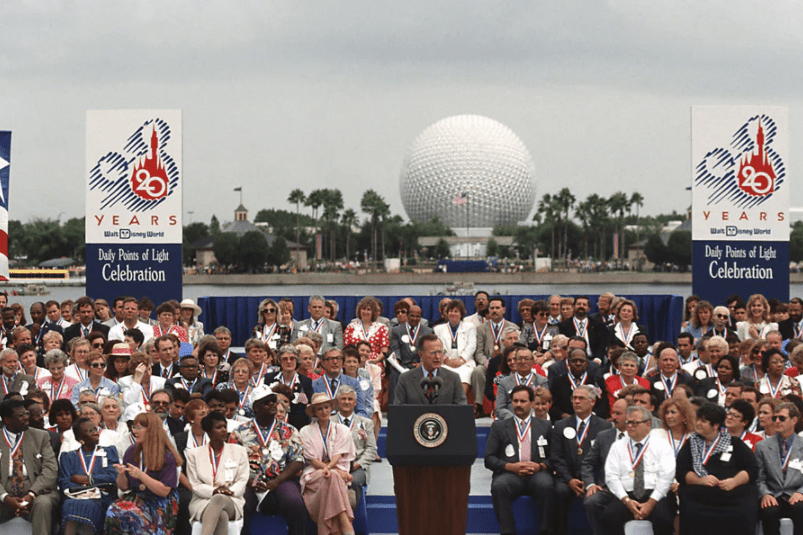 In 1991, President George H.W. Bush visited the America Gardens Theatre in EPCOT to address the recipients of the Daily Points of Light Award. The award celebrates notable volunteers across the country who have made exceptional contributions to their local communities. The Walt Disney Company itself later became a recipient of a Daily Points of Light award in 2004, with the honor bestowed by Bush’s son, President George W. Bush.

Barack Obama Delivers a Speech from the Magic Kingdom (2012) 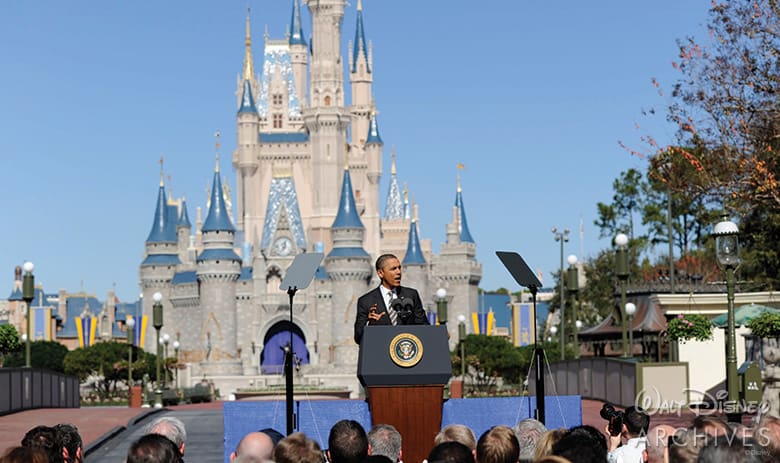 The last president to hold  public speech at a Disney park was Barack Obama in 2012, who spoke from Main Street U.S.A. During his speech, the President acknowledged the role of Disney theme parks as a quintessential part of the “American spirit.” Later in 2012, Obama returned to Walt Disney World to participate in an annual conference hosted by the National Association of Latino Elected and Appointed Officials.

Since Obama’s visit in 2012, we have seldom seen presidential visits to Disneyland or Walt Disney World, and when we have they have simply been in attendance at conventions that just happen to be hosted at a Disney hotel. In 2019, President Trump was scheduled to appear at a convention hosted by the Republican Party at Disney’s Grand Floridian Resort and Spa, though the event was postponed and ultimately canceled, making Trump the first President to miss a visit to a Disney Park since Lyndon B. Johnson.

Earlier this month, former Vice President Mike Pence attended an event at Disney’s Yacht Club Resort hosted by the Federalist Society, where he provided comments in response to his administration’s view of the 2020 presidential election, however he did not attend a formal press event or give a speech from one of the theme parks as had been done by Presidents and Vice Presidents in the past.

As for our current President, Joe Biden has not (at least so far) visited a Disney Park, however, he has had some interaction with the Walt Disney Company outside of lending his voice to the Hall of Presidents. In 2021, Biden met with CEOs from multiple industries to discuss policies regarding vaccine mandates in the workplace, and Disney CEO Bob Chapek was among the leaders hosted by the President.

Disney Parks have had quite the history of presidential visits, for all types of speeches and events, and for both primary parties. Like the Hall of Presidents attraction itself, Disneyland and Walt Disney World make up a couple of places that extend beyond political biases allowing a variety of Presidents, Vice Presidents, and Presidential candidates to engage with colleagues and the public on Disney property.