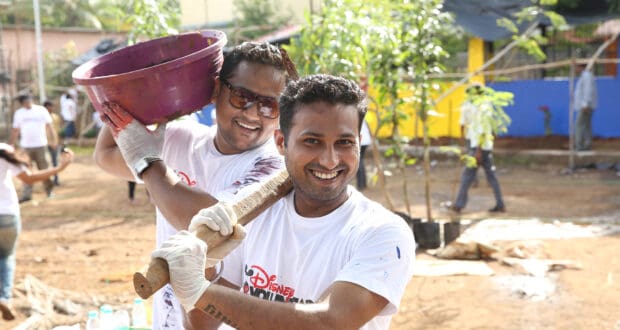 Ways In Which Disney Gives Back

It’s that time of year again, when people start to behave a little more generously toward one another, and the spirit of giving is first and foremost in the minds of all. But for the Walt Disney Company, generous giving isn’t just a seasonal occurrence, but rather an ongoing effort year-round. Throughout its tenure, Disney has been committed to making the world a better place by improving life and living situations for all those who call this planet home.

Through sustainable, ecological, and environmental efforts to their active, ongoing engagement and support of countless humanitarian causes, there can be no mistake that the Walt Disney Company practices what it preaches when they say that Disney is for everyone. In recognition of their devotion to making the world a better place for all, we’re highlighting nine of the numerous ways in which Disney gives back!

Related: 13 Things The Walt Disney Company Does With Your Money

Did you know that the Walt Disney Company adamantly supports various nonprofit organizations via charitable cash donations? And we’re not talking about small contributions here; we’re talking totals usually ranging between 300 and 400 million dollars annually! The ways in which Disney contributes monetarily take on many different formats and primarily goes toward assisting families, children, and communities in need.

8. The Magic of Storytelling Campaign

In addition to contributing to the financial wellbeing of various not-for-profit organizations, Disney partners with the education-centered nonprofit First Book in an active collaboration to provide new books, educational resources, and other essentials in service of children and their educators. Through their Magic of Storytelling campaign the Walt Disney Company has provided literally millions of books to First Book since 2000 in their continued initiative to reach out to children and families in underserved communities across the nation. Furthermore, they encourage everyone else to help support the cause by also donating new books to First Books. To learn more, visit MagicOfStorytelling.com.

The Marine Toys for Tots program gains momentum each year right around the holiday season. Many companies proudly support the program and its goal for providing children and families in need with toys in the spirit of giving. So it should come as no surprise to learn that the Walt Disney Company has been at the forefront of supporting the Toys for Tots mission for well over 70 years now.

And in continuation of their annual tradition of generous giving, Disney is once again presenting its Ultimate Toy Drive for the 2021 holiday season with a $500,000 donation to Toys for Tots. Encouraging fans and guests visiting Disney Parks to get in on the action as well, Disney presents many ways to give, including online toy donations via shopDisney.com (now through December 24, 2021), and in-person drop-off designations at Disneyland Park and throughout Walt Disney World Resort. Click here to learn more.

Related: Disney Ultimate Toy Drive Kicks Off in Support of Toys for Tots

For well over three decades this charitable team comprising of Disney Cast Members from across the globe has been donating time, energy, labor, and resources toward the betterment of communities and organizations around the world. As part of the Disney Worldwide Outreach Program, the myriad ways in which Disney VoluntEARS have contributed globally are unending. The core foundation behind their charitable deeds goes toward directly serving families and children. In addition, their motivational drive focuses on creating positive opportunities and projects that foster education, personal growth, provide health and human services, and so much more.

In addition to helping nonprofit organizations through generous contributions and financial support, Disney gives the gift of Park Magic by way of providing complimentary tickets to various not-for-profit groups as well. In coordination with the Points of Light volunteer organization Disney donates Park tickets to organizations that meet a six-step process via Disney’s guidelines in their Disney Family Volunteering Rewards Program. The program currently remains on hiatus due to COVID-19 but only temporarily. To learn more about the Points of Light program in general, visit https://www.pointsoflight.org.

Other ways in which Disney gives back include their many ongoing commitments to fostering environmental sustainability. Their efforts for doing so utilize several different initiatives. Some of these include reducing waste throughout Disney Parks and other locations, opting for renewable energy sources via solar energy where applicable, conserving fuel usage by utilizing biodiesel from recycled cooking oil, resourcing water responsibly, and protecting land and nature along with incorporating numerous other methods. Every year they set new goals for the overall betterment of the environment, some long-term, others more immediate. And to date, they have met and exceeded each and every one of these goals.

Walt Disney himself has a long history of supporting children’s hospitals, and even visited sick children accompanied by costumed Disney characters dating back to as early as the 1930s. And the Walt Disney Company continues in their efforts to support children who are hospitalized and make their experiences as positive and comforting as possible. They have contributed and continue to contribute in countless ways, from providing essential resources to building playgrounds and endowing joyful gifts and other much-needed diversions. But the biggest gift they bring to children and families is that of a smile.

Disney is in the business of granting wishes, and that’s especially true when it comes to fulfilling the wishes for critically ill children. Disney has a history dating back to 1980 of working with the Make-A-Wish Foundation and continues to do so every year, encouraging others to get in on the action and help out as well through their #ShareYourEars campaign. They’re also a founding partner of Give Kids the World Village—a nearly 90-acre not-for-profit resort based in Kissimmee, Florida that provides vacationing families with critically ill children free lodging and accommodations as they pursue a dream-come-true vacation experience. You can learn more by visiting https://www.gktw.org. Click here to learn more about the Make-A-Wish #ShareYourEars campaign.

We’ve only begun to scrape the surface in highlighting the numerous ways in which the Walt Disney Company gives back. So, if the thought that Disney is expensive has ever crossed your mind, you may rest assured that all the money you spend is going toward a noble and charitable cause that shares the magic with people and causes that need it most.

Related: Make-A-Wish & Disney Grant a Royal Wish in Spanish – With Help from Belle!