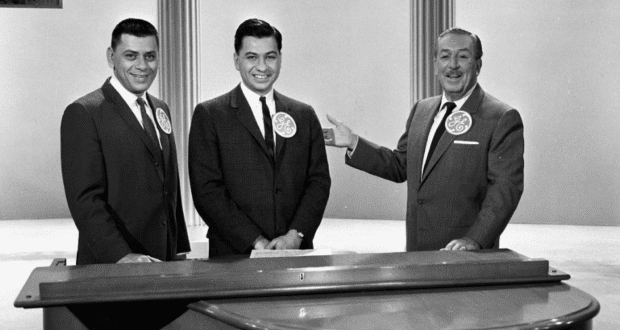 A Tribute to the Sherman Brothers and Their Enduring Legacy

There have been many notable sibling duos throughout history. Within the Walt Disney Company, in particular, the team of Walt and Roy Disney is perhaps the most famous demonstration of brothers working together — the one that springs instantly to mind, and rightly so. But they weren’t the only ones.

With a claim to fame for having produced more motion picture musical song scores than any other songwriting team to date, Robert and Richard Sherman — better known as “the Sherman Brothers” — together boast a long and impactful history in Disney music-making as well as the entire music-writing industry in general.

Their contributions are legendary and their innumerable works are practically synonymous with many of the beloved Disney classics we know and love today. Here is a tribute to the famed Sherman Brothers, highlighting their history and their enduring legacy with Disney.

Related: The 10 Most Hauntingly Beautiful Pieces From Disney Movie Scores

Robert Sherman, born 1925, and his younger brother Richard Sherman, born 1928, started writing music together as a team back in 1951. As the first-generation American-born sons of Russian-Jewish immigrants, their father — Al Sherman — was also a notable songwriter from back in the days of the Tin Pan Alley era.

It’s interesting to note, however, that writing music for movies and entertainment wasn’t the original ambition of either brother. Robert’s goal was to author novels whereas Richard’s was to someday write “the great American symphony.” It wasn’t until a challenge was set by their father for the boys to work together to come up with some great music that “the Sherman Brothers” became a duo in music writing.

Working as a Team

By 1958 Robert Sherman founded the Music World Corporation — a noted music publishing company based in Beverly Hills, California. And by 1960 they would go on to become the very first musical publishers to ever co-brand with the Walt Disney Company’s newer BMI subsidiary — Wonderland Music Company. As the story goes, Walt Disney himself was very impressed by the Sherman Brothers and in little time the two were officially hired as staff writers for Walt Disney Studios.

Their Time at Disney

The Sherman Brothers’ official tenure for working with Walt Disney Studios spans 13 years between 1960 through 1973, although they did continue to produce work for the company up until the year 2000 with the release of A Tigger Movie. What’s more, several of their earlier renditions still receive billing credits in newer works that feature them.

The brothers’ first assignment from Walt Disney himself came in the form of their “Strummin’ Song,” which famed Mousketeer and emerging “It girl” of the day Annette Funicello performed in the made-for television production of The Horsemasters. They then went on to write that peppy school-spirited “Medfield Fight Song” for the more wildly popular movie theater production of The Absent-Minded Professor that same year.

In Addition to Film and Television

Although they are most widely known for their contributions to Disney movies and television, the Sherman Brothers’ work for the company extended far beyond those two entities to take on numerous other notable formats. They’re even the musical masterminds behind some of the most contested musical scores featured throughout Disney Parks around the world.

Perhaps their best-known work, one which has arguably been claimed for being the most performed song of all time, is their classic “It’s A Small World (After All).” Other beloved attractions showcasing their themes include Journey Into Imagination with their “One Little Spark” number, Walt Disney’s Carousel of Progress with “The Best Time of Your Life” and “There’s a Great Big Beautiful Tomorrow,” and Disneyland’s own Disneyland Forever nighttime spectacular, which plays “Live the Magic” and “A Kiss Goodnight.”

Works Outside of Disney

It should be noted that Robert and Richard Sherman did contribute to several other works and productions outside of the Walt Disney Company. Their first really big non-Disney success came about with their contributions to the film Chitty Chitty Bang Bang, which was released by United Artists in 1968 and earned the brothers their third Academy Award nomination for “Best Original Song” that same year. Following later success of the theater adaptation of this story, the Shermans wrote an additional six new original songs in 2005.

Other notable contributions the brothers made throughout their career, independent of Disney, have included music for Snoopy Come Home (1972), which received a Grammy Nomination, Charlotte’s Web (1973), and countless other scores for film and television.

They also produced many originals for stage as well, including songs for what went on to eventually become the biggest-grossing original Broadway musical: the Tony Award-nominated Over Here! Several of their songs even went on to become top-ten hits, including their original “You’re Sixteen,” which even ended up becoming Billboard’s Hot 100 Top 10 twice.

Related: One of Disney’s Most Iconic Songs Has Been Inducted Into the Library of Congress

We briefly mentioned just some of the multitude of awards and accolades the Sherman Brothers earned over the years, both within the range of the Walt Disney Company and otherwise. To date, their most notable recognitions worth mentioning have included: winning Academy Awards for Mary Poppins, a number of additional Academy Award nominations, Annie Award Nominations, BAFTA Award nominations, and various Golden Globe nominations (winning two Grammys for Mary Poppins and Winnie the Pooh and Tigger Too).

The duo also received several other Grammy nominations, winning various “Golden Laurels” from the Laurel Awards, a nomination for the Olivier Awards for “Best Musical” for Chitty Chitty Bang Bang (1968), and many others. For their work on Tom Sawyer back in 1973, the Shermans also went on to become the only Americans to win First Prize at the Moscow Film Festival in Russia. From BMI they were also awarded the “Pioneer Award” back in 1977 and then the “Lifetime Achievement Award” later on in 1991.

In 1985, Disney awarded the brothers the “Mousecar” award at the Hollywood Bowl theater. Five years later they were officially recognized as “Disney Legends” at Walt Disney Studios in Burbank, California. Then in 2010 they even received an official window of honor on Main Street, U.S.A. in Disneyland, California for their notable Park contributions.

Robert and Richard Sherman also received their own Star on the Hollywood Walk of Fame back in 1976. They were inducted into the Songwriter’s Hall of Fame back in 2005, and even received the prestigious National Medal of Arts back in 2008, which was presented by President George W. Bush at the White House. This is the highest honor for artists by the United States Government.

Robert Sherman died back in March of 2012 at the age of 86. Richard Sherman, now aged 93, lives with his wife Elizabeth of 60 years in Beverly Hills, California where he remains an active presence forever tied to the Walt Disney Company.

The lasting legacy of the Sherman Brothers continues to this day, forever epitomizing music-making within the Walt Disney Company. And with never-ending success that just keeps going on for newer generations to discover joy with, you may rest assured that “There’s a Great Big Beautiful Tomorrow” forevermore.